How First Responders Are Fighting Back Against Synthetic Opioids

America is in the midst of a coast-to-coast opioid epidemic, and its grim statistics serve as a sobering reminder. A 2016 report issued by the Centers for Disease Control (CDC) and Prevention revealed that over 60,000 Americans now die annually from drug overdoses, with opioids accounting for two-thirds of those deaths. During the past few years, more potent synthetic opioids, spearheaded by fentanyl and carfentanil, have been introduced, and those analogs are being combined with heroin or sold as counterfeit legal pharmaceutical pills on our streets at an alarmingly increasing rate. Both fentanyl and carfentanil can be readily-absorbed through the skin or inhaled, and it only takes the equivalent of 5 to 7 table salt grains of fentanyl to induce accelerated respiratory failure and even death. Carfentanil is markedly more potent than its fentanyl cousin, and therefore either synthetic opioid poses significant hazards if inhaled or absorbed intradermally in even tiny amounts.

Because of these rapid and powerful exposure threats these synthetic opioids present, not only are drug users and criminals at risk, but first responders including firefighters, paramedics, EMTs, law enforcement officers, and even drug detection dogs are being placed, oftentimes unknowingly, in harm’s way. Initially blindsided a couple of years ago by the unexpected exposure to fentanyl and carfentanil while performing their jobs, several first responders across the country, and even some drug detection canines, suffered severe opioid overdoses requiring emergency hospitalization. Immediate and effective protective protocols were needed, and the Drug Enforcement Administration (DEA) was the first to address this deadly new first responder threat. 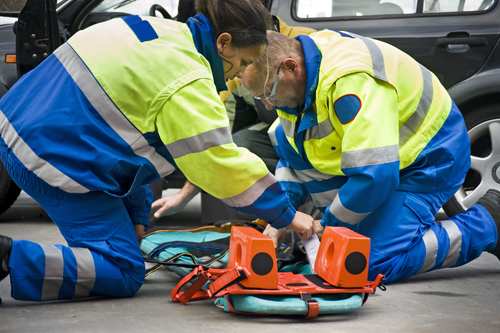 In addition to the above first responders, DEA agents and their drug detection dogs also may encounter synthetic opioids during drug seizure operations, border stops or in other job-related settings. Starting in 2016, the DEA released a list of synthetic opioid exposure protective protocols to their employees and first responders across the country. As a result, naloxone, a drug long used in hospital emergency rooms to reverse opioid overdose symptoms, is now being carried by first responders across the country. It can be quickly administered in the field, and has already helped save the lives of many front line medical and law enforcement personnel, along with K-9 dogs placed in harm’s way. In addition to carrying naloxone by all first responder units, the new DEA synthetic opioid recommendations include:

• Understanding and educating all first responder personnel on the dangers of fentanyl and carfentanil exposure including their transdermal and inhaled modes of transmission.
• Wearing of protective gear when handling any encountered pharmaceuticals including marijuana. This means wearing latex gloves when drugs are found, in addition to respiratory gear when involved in drug inspections, seizures or drug lab environments.
• Whenever the presence of fentanyl or carfentanil is even remotely suspected, personnel are instructed to not field test for those substances under any circumstances.
• As was aforementioned, ensuring that naloxone is carried by all first responders in the field.

As more and more police, fire and emergency medical departments have begun implementing these important precautions across the country, the incidence of accidental opioid overdoses by first responders has dropped significantly. When pulling up to a search, crime or accident scene, the new guidelines have provided first responders with a fighting chance against the insidious dangers of synthetic opioids, as accidental overdoses and emergency room visits have been thankfully reduced.

While the human first responder safety outcomes are certainly the most important, the new synthetic opioid guidelines have also been saving the lives of canines that in the past might have died from an accidental overdose. Instructors from several veterinary schools, including the University of Illinois in Champaign/Urbana, have been training ambulance medical personnel, police officers and other drug enforcement agents on how to administer naloxone to their dogs and get them stabilized en route to a veterinary hospital.

One potential concern when a drug detection dog inhales fentanyl or carfentanil is that they can cause the animal to be disoriented and aggressive just like a human. Because of this fact, first responders are being taught by vets how to properly handle a dog as they are coming out of an opioid-induced coma. As is the case for humans, naloxone can be given to a canine in the field that’s experiencing an opioid overdose via an atomizer using intranasal administration, or by an autoinjector into the animal’s muscle tissue. Both forms of administration have shown positive and prompt results in people and “man’s best friend” alike, while also saving lives.

Fortunately, as these fentanyl and carfentanil safety protocols for first responders, and the dogs that assist them, have been firmly put in place across our nation, those front-line personnel are much less at-risk than they were even a year ago. On the flipside, the opioid crisis is not going away anytime soon, and people are still abusing, becoming addicted to, and dying from opioid overdoses in alarming numbers every day across America. If you or a loved one has fallen prey to opioid dependency, reliable help is available. For more information on the dangers of opioids including fentanyl and carfentanil and how they even pose a threat to companion animals, or about some proven ways to treat opioid addiction, visit: www.curacore.org now.