Zoe prior to 1st session

Osteoarthritis is characterized by many joint changes, including osteophytes, cartilage changes, muscle loss, and joint thickening. Joint movement may be restricted due to mechanical factors (osteophytes) and muscular stiffness (Janssens). Affected animals experience altered gait, as well as discomfort depending on the severity of each case. Joint changes promote inflammation, so these animals are more prone to injury and pain from everyday activities. In this case, a geriatric canine with previous anterior cruciate repair became lame following running and playing with another canine. After rest and medications did not resolve the lameness, acupuncture treatment was started. After three treatments, the patient’s gait was again sound, and non-steroidal anti-inflammatory medication was discontinued. This case provides evidence of the lasting effects of acupuncture and usefulness of ongoing management of canine osteoarthritis. 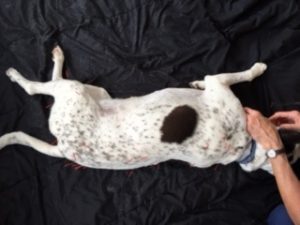 Zoe prior to 1st session

This case study involves the treatment of an 11-year-old mixed breed spayed female canine, Zoe. She tore her left anterior cruciate ligament in May 2015. Medical management was her main form of treatment for the tear and reported osteoarthritis. Owners were using Adequan injections and carprofen anti-inflammatory until October 2015 when an extracapsular repair was performed. Zoe’s recovery from the procedure had been uneventful and was well managed on continued carprofen, other than the occasional “stiff day” reported by her owner.  Zoe began acupuncture treatment in May 2016 after persistent limping on her previously repaired anterior cruciate ligament limb was observed after playing on their two-acre yard with her housemate. Zoe was brought in five days after the initial incident.

On presentation, the patient was toe-touching lame on the left hind limb, with occasional normal use of the leg. HR-88 RR-12, mildly tender to palpation of the limb and stifle region. Extracapsular repair suture can be felt in the left knee, decreased range of motion present in both the stifle and hip bilaterally. Cranial drawer and swelling of the affected limb were not observed. Rest of physical examination was unremarkable. Myofascial palpation revealed tension throughout the neck, shoulders, and thoracolumbar spine. Bilateral sensitivities to hip joint palpation, severe muscle wasting, and myofascial tension in the left hind quadriceps and gluteal muscles. No further diagnostics were performed. Previous laboratory evaluation and radiographs were performed in October prior to surgery, revealing evidence of osteoarthritis in bilateral hips and stifles. Bloodwork was within normal limits.

After performing a detailed physical exam and myofascial palpation, a treatment plan was formulated using my findings as well as the patient’s presenting history. Based on the presenting complaint and exam, it was clear that Zoe’s hind limb limp was not the only affected area. Involving central and peripheral points help to promote the best outcomes when using acupuncture. By using points that help engage the central nervous system, a down regulation of the sympathetic and activation of the parasympathetic nervous system pathways occurs. This can help promote muscle relaxation throughout the body. Therefore, points along the spinal segments were included in my treatment course. To target Zoe’s area of max concern, promoting good inflammatory mediators at the point of max discomfort needed to occur. Local treatment using peripheral points was the best way to achieve this by increasing circulation to the area as well as activating the nerve pathway. Finally, trigger point therapy was added to reach muscle relaxation and relieve myofascial entrapment of nerves particularly in the hind limb and shoulders. I formulated Zoe’s sequence of treatments based on her particular needs at each session. As her limping and discomfort dissipated, her treatment sessions became infrequent. 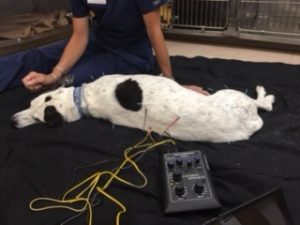 As a starting point for treatment, acupuncture points were selected based on the myofascial exam and known conditions. Red Seirin (0.18 x 30mm) acupuncture needles were used and remained in place for 20 minutes for the first session. GV-20, GV-14, and Bai Hui were selected, not only as calming points but also for their central effects of relaxation to the fore and hind limbs. SI-11 and SI-12 were used in trigger points to relax the compensatory muscle tension from weight shifting. BL-22, BL-25, and BL-18 were placed surrounding trigger points to aid in relaxation of the myofascial tension being carried in the thoracolumbar junction. Bilateral hip triads were placed for her known struggles with osteoarthritis and decreased range of motion (BL-54, GB-29, GB-30). ST-34, ST-36, and BL-40 were chosen as local points to focus on the stifle, relax muscle tension, increase circulation, and neuromodulate.

Zoe’s treatment varied minorly at every visit based on the myofascial exam and patient tolerance. Occasional additions of LI-4, LI-10, and LI-11 for complete central activation, calming, and further forelimb muscle relaxation. The main method used was dry needling with gradual increase in needle size. Electrostimulation is beginning to be tolerated on bladder line and stifle points (Mixed 2/100 using Blue 0.20 Seirin needles for 10 minutes). The frequency of treatment started as weekly for the first three sessions, improvement in gait was seen after the first two sessions. Sessions are now monthly and before any sign of stiffness is observed by the owner. Adjunctive treatments at home included mild physical therapy with sit-to-stand exercises to help increase muscle tone. The patient was put on Grizzly Salmon Oil Omega-3 fatty acids and carprofen was reduced to once daily after the first two sessions of acupuncture. Now, the patient is off of non-steroidal anti-inflammatories altogether. Owner discontinued Adequan injections prior to starting acupuncture treatment.

Zoe is still continuing her acupuncture treatments as ongoing management of her osteoarthritis. She is only receiving omega-3 fatty acid supplementation for muscles and joints. Her gait, attitude, and activity level continue to rise. I believe that it can clearly be seen that acupuncture played a big role in Zoe’s recovery, as well as maintaining her quality of life. From this case, I learned to take treatment advice from my patients and ease them into their treatments. Zoe has a very active pannicular reflex, and bladder points are challenging. I also learned that patients not tolerating all planned treatment needle placements does not equate to a failed session. The fact that anti-inflammatory medication was able to be reduced and no longer needed on a daily basis is very telling as far as the mechanisms of action of acupuncture. Its incorporation into a multi-modal approach to treatment of osteoarthritis can only benefit patients. Zoe’s range of motion is much improved and about 90 percent of a normal, healthy dog with her stifles and hips.