A nine-year-old male neutered Labrador Retriever named Tucker presented for acupuncture following post-operative complications after the rupture and surgical repair of his left Achilles tendon. His presenting complaints were difficulty walking and standing due to digital contracture, disuse muscle atrophy, and compensatory strain patterns along his back. Additionally, he had intermittent lameness on his left front leg. After multiple sessions in which acupuncture, electroacupuncture, and massage were performed, he demonstrated appropriate digit and foot placement, improved muscle strength on the affected leg, and significantly improved comfort on his back, left front leg, and areas of muscle contracture. 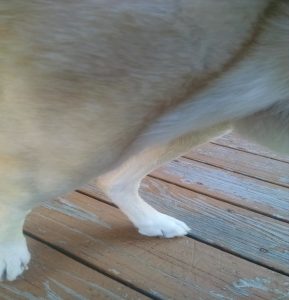 Tucker ruptured his left Achilles tendon while chasing a squirrel on Aug. 8, 2015. He underwent surgery at a referral surgical center on Aug. 19, 2015, to re-attach the torn Achilles mechanism. Post-operatively, he was placed in a thermoplastic splint in hock hyperextension for nine weeks. Following splint removal, he had difficulty walking due to digital contracture and disuse muscle atrophy. He presented for acupuncture with the chief complaints of associated strain patterns along his back, impaired postural placement of the foot, digital contracture, and disuse muscle atrophy on his left rear leg. His owners carefully followed the recommendations of the surgeons for post-operative care, with gradual return to activity and slow leash walks. Previous pertinent medical history includes an intermittent left forelimb lameness. He is currently on a glucosamine supplement, probiotic, and heartworm preventative. 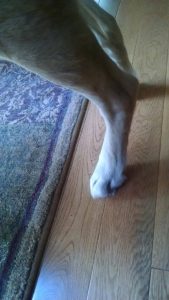 Physical examination on Tucker revealed a TPR within normal parameters at each visit. He demonstrated no abnormal neurologic findings. Recent bloodwork revealed a normal CBC, unremarkable biochemistry except for the creatinine being slightly elevated at 1.5 (0.3-1.4) with a first morning USG of 1.038. Myofascial palpation reveals discomfort on the left elbow (just lateral to the bicipital tendon and digital extensor muscle bodies), trigger points along the interscapular region bilaterally, muscle fasciculations along the lumbar region along the Bladder lines, spasms of the left pectinius muscle, and digital contracture/standing with the left rear foot held up. His left cranial tibial muscle is significantly tender on palpation, and a significant band of muscle tension/contracture is present on the semitendinosus. His right quadriceps group demonstrates compensatory muscle hypertrophy, spasms to the iliopsoas, semimembranosus, and semitendinosus. He has a small, fluctuant subcutaneous nodule present over the left humeral epicondyle that was noted after the third session. Radiographs taken of the area were reviewed by a radiologist and revealed an unremarkable left elbow and carpus, and focal soft tissue swelling cranial to the distal left humerus. These radiographs were also reviewed by a board-certified surgeon and recommendations from both specialists were to monitor the area for changes or discomfort. 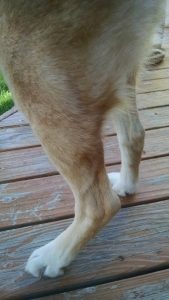 The acupuncture approach was determined with the goal of improving comfort and placement of the left rear foot while standing and walking, as well as regaining muscle mass. The first few treatments focused primarily on alleviating muscle tension and discomfort from the compensatory muscle strain. The latter treatments focused on the significantly tightened semitendinosus muscle on the left side, as well as adding electroacupuncture to enhance acupuncture effects. The left elbow region presented a significant challenge for treatment because Tucker would not tolerate acupuncture nor gentle massage to the digital extensors, except for limited times at the end of the latter sessions. The small fluctuant swelling over the lateral humeral epicondyle has not changed in the several months since its detection and does not cause discomfort. The owner has elected to continue to monitor it, with the recommendation per the radiologist and surgeon to pursue an ultrasound of the area if it changes. He demonstrated significantly improved comfort on the left front digital extensors throughout the sessions.

The acupuncture treatment protocol for Tucker included seven separate treatments that were one to two weeks apart. Five of the seven treatments solely involved dry needling and massage. The fifth and sixth treatments were augmented with electroacupuncture (points notated with “*”). Typically, between 10-15 needles per side were used. Each session revealed improved digital placement, gaiting, standing, and muscle strain patterns, so point selection trended toward fewer back points and more specific points targeting the proprioceptive points on the rear legs.

The acupuncture points selected were based on calming points, palpated trigger points along the back, hip triad to reduce discomfort from compensatory muscle strain and improve muscle tone, general well-being points, and points along the left leg both proximally and distally along the strained muscles and Achilles tendon on all four surfaces of the leg. Important points were also done on the right side to help with compensatory muscle strain. He tolerated very limited acupuncture points along the front legs, especially around the elbow. Smaller needles were used, although infrequently. Massage was mainly employed in that area.

As denoted by the photos, client feedback and myofascial exam (and even comments from their neighbors) showed that Tucker demonstrated significant improvement in placement, function, and gaiting on the left rear foot and overall improvement of comfort in both back legs, his left front leg, and back. The owner kept a photo journal of foot placement for an objective assessment. Tucker had been stagnant with foot placement for months until the acupuncture treatments were started and showed marked and rapid improvements with the treatments, providing reasonable proof that the response was from acupuncture and not chance alone nor spontaneous improvement. Minimal adverse events were noted: Slight stiffness after one treatment and one episode of vomiting (attributed to eating too much baby food during the session). The small swelling noted over the left humeral epicondyle appears to be unrelated, no needles were placed in that region. The radiologist, surgeon, and I feel that it cannot be completely ruled out as related to the acupuncture, but considered it very unlikely. The takeaway lesson from this case is that acupuncture is a viable method for improving comfort, digital placement, disuse muscle atrophy, and muscle contracture following surgical correction of an Achilles tendon repair. It is an exciting new avenue for both veterinary and human orthopedic medicine. 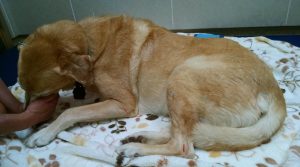 Tucker’s left Achilles was ruptured in August 2015. He had surgery in September 2015 and was in a boot for nine weeks. He continues to often present his foot high, as if tip-toeing and toes often appear to be cramped. He also often appears to have a strained gait and periodically hops to avoid pressure on the left back leg. As an acupuncture patient myself, it was at this time it was decided to try acupuncture to alleviate his discomfort. 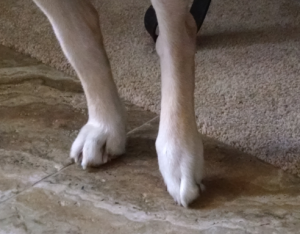 Tucker’s first appointment was on 6-28-16. It was an experience for all and with the help of turkey and beef frozen baby food, the session was a success. The second treatment was 7-5-16. This time, with the aid of turkey and sweet potato! After just two treatments, Tucker’s hock has lowered and his toes are straightening, His gait is better, and he is trotting. 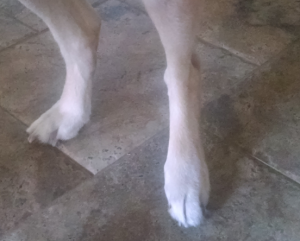 With a third treatment on 7-12-16, the toes look to be more relaxed, and the left back hip and leg muscles appear to be more engaged when he walks; resulting in a more uniform gait. 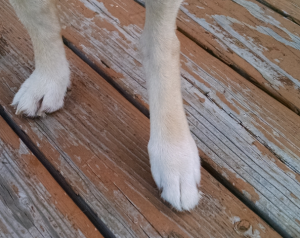