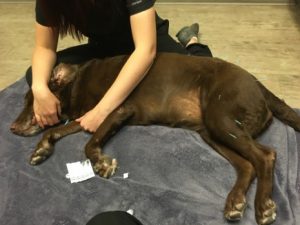 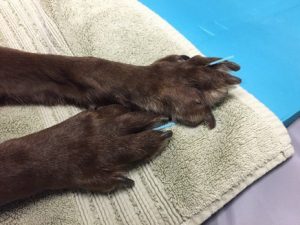 Pinky is an 11-year-old spayed female chocolate Labrador Retriever with severe osteoarthritis in multiple joints and spondylosis in her back. She presented for pain and recent mild weakness in hind limbs causing her to slip occasionally and not jump up on things as well as she used to. She was also restless at night.

Pinky improved with treatment as she was more stable, back to jumping on furniture again, and much less restless at night. However, it is difficult to know entirely how much was due to the acupuncture treatments and how much was due to adding gabapentin to her protocol halfway through the eight treatments.

Pinky’s chief complaints were weakness in her hind limbs and pain in most of her joints, particularly her hips, stifles, carpi, and manus – all have marked angular deformities. The specifics of her previous injuries or surgeries is unknown as she was a rescue dog. Due to GI issues in August 2014, abdominal radiographs were taken that showed hip dysplasia with severe osteoarthritis and spinal spondylosis, most severely in the T1 1-13 and L 3-6 areas. She had a course of low level laser therapy (LLLT) for three weeks that initially seemed to help with her backend strength. But by the end of the three weeks, her owner didn’t feel it was helping much. When the case study began, she was on Apoquel and low-dose prednisone for chronic allergies, per the dermatologist, as well as joint supplements for her OA. She is a very active dog and has access to a swimming pool. Her female owner has better control over her than the husband, who sometimes lets her do too much, especially when swimming. She has been slipping on the smooth floors of the house, but has done better since her owner got booties with traction on them for her.

PE: Weight = 63lbs., Temperature = 101.7 F, Heart Rate = 110 bpm, Respiratory Rate = 50bpm, Mucous Membranes (MM) = pink and moist with a capillary refill time (CRT) of <2secs. She was very bright and alert, but slipped in the exam room when running around and couldn’t jump up onto the bench in the exam room. Her conscious proprioception was normal in all four limbs. Her teeth had mild tartar and wear. Changes in her skin and musculoskeletal system were: right front paw (P2) has a small sore on medial aspect of the toe (thumb nail size), also on left front of medial aspect (red raised area). There was crepitus in the back end (hips and stifles) with decreased range of motion in the hips. Chronic changes with visible thickening of the joint in multiple joints, but most pronounced in front carpi and digits. Digits had thickened joints and deviated laterally, twisting to the point that on many she is not walking on her digital pads. Other than the hindlimb weakness, her neurologic exam was unremarkable. Her myofascial exam showed taught bands in her neck, infraspinatus, supraspinatus, triceps muscles, and paraspinal muscles. She was also slightly tender in the sacral area of her spine official site. 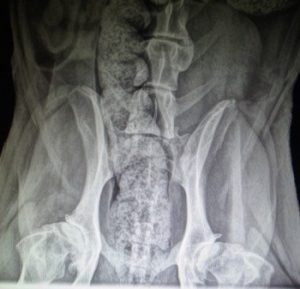 My treatment plan included dry needling placement of 26 Seirin [J type No.3(0.20) x 30mm] needles. The points that I chose included the following: Homeostatic points: GV-20, GV-14, BaiHui, LI-11, ST-36; Hip points: GB-29, GB-30, BL-54; Stifle points: SP-9, SP-10, ST-34, BL-39; Spinal points: BL 12-15, BL-25, BL-52; Digits: Baxie point between the third and fourth digit of both front paws; and trigger points needled in the infraspinatus and supraspinatus muscles, triceps muscle, and sacral spine area. Due to Pinky’s energy level, once we were able to get her relaxed with the homeostatic points and get her to lie down on her right side, I primarily placed the needles in her left side except for the Baxie point on each front paw and four placed bilaterally in the sacral spine.

I decided to do treatments twice weekly for four weeks due to the weakness and pain issues. The only other adjunctive treatments for her primary complaints were prednisone, gabapentin, and Dasuquin Advanced.

After the second treatment, Pinky was slipping less and able to jump onto furniture better in the exam room, but her owner didn’t see a lot of other improvement. By the fifth treatment, her owner felt that she was stronger and sleeping much better at night. However, it is difficult to assess how much was due to the acupuncture treatments and how much was due to adding gabapentin. I feel that the increased strength was due to the acupuncture therapy because it started to improve prior to starting the gabapentin. But the improved sleep could have been due to either one, or both.

We did not see any adverse events from the therapy. Her owner noticed that she slept a lot after the first treatment, but nothing noticeable after that. This case taught me that even very excitable dogs can do well with acupuncture treatment. Pinky calmed down considerably about five minutes after the initial needles were placed. It also showed how the therapy can increase the strength for patients dealing with hindlimb weakness.