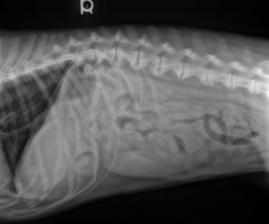 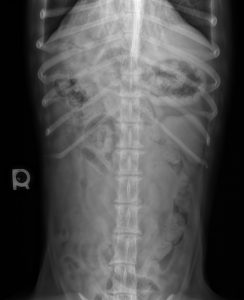 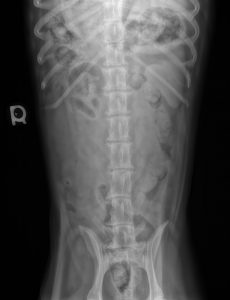 This case report describes the use of acupuncture to manage pain in Twila, a 10-year-old female spayed German Shepherd mix with severe thoracolumbar spondylosis. The owner reported reduced mobility of one year duration, and physical exam revealed pain on paraspinal palpation. Radiographs of the spine and pelvis ruled out hip dysplasia and confirmed a diagnosis of severe spondylosis from T-11 through T-12 to the lumbosacral junction. The patient received four weekly acupuncture treatments consisting of points for autonomic neuromodulation, bladder points along the area of concern, local trigger points, and frontlimb points to address pathology secondary to compensatory weight-bearing. The owner reports an overall reduction in pain and improvement in the patient’s mobility for several days after her acupuncture treatments.

Twila’s owner reported that over the past year, the patient has had more difficulty climbing onto the couch or into the car, is sometimes painful when manipulated or lifted, and walks with a stiff gait. Her owner often takes her for long hikes on the weekend, and her pain and stiffness are especially marked the day after major exertion. Twila used to go for short runs with her owner, but has been unwilling to do so for the past several months. The patient was adopted by her owner from a shelter in Oregon four years ago, and her history before that time is unknown. Since she has been with her current owner, the patient has had a history of several pancreatitis episodes following dietary indiscretions, but has no other known major medical history.

On presentation, Twila was bright, alert, and responsive. She had a temperature of 102.1, heart rate of 90 beats per minute, and respiratory rate of 32 breaths per minute. She weighed 21.8 kg and was trim with a body condition score of 4/9. Physical exam revealed moderate hindlimb muscle atrophy. Multiple trigger points were elicited on paraspinal palpation along the inner bladder line from T-10 through the lumbosacral junction, and the patient was painful on palpation of the psoas muscles bilaterally. No pain or trigger points could be elicited in the front limbs. Lateral and DV spinal radiographs revealed severe spondylosis from T-11 through T-12 through the lumbosacral junction with bridging spondylosis at L-1 through L-6 and the LS junction.

Points were chosen based on the following criteria: permission points, autonomic neuromodulation, anti-inflammatory effects, pelvic limb dysfunction, local pain, and trigger points. Additional treatments included a veterinary joint supplement and reduction in high-impact, off-leash activity in favor of lower impact exercise, such as swimming and leash walking. The owner declined NSAIDs due to a concern over potential side effects. A referral for physical therapy was discussed, but declined due to cost and time commitment.

The patient was treated once a week for the first four weeks, after which sessions were reduced to every two weeks. Fewer points were used during the first session, but the majority of the listed points were used in following sessions. Dry needling alone was used in all cases.

Immediately following treatments, the owner reported that the patient appeared more relaxed and comfortable at home, followed in an improvement in mobility and stiffness as measured by the patient’s ability to rise from a recumbent position or climb into the car without apparent difficulty. The improvement in mobility initially was reported to last 24-48 hours following treatment, but the effect became more prolonged as treatment progressed. Given the lack of other medical management, clinical improvements were attributable to acupuncture treatment alone.

Previously, proposed mechanisms for the development of spondylosis included spinal instability, trauma, intervertebral disc disease, and normal aging. Because spondylosis is not universally accepted as a pathologic condition in the veterinary literature and the underlying cause and resulting clinical signs may vary, there is no standard for treatment in the presence of clinical signs. However, studies from human literature show an improvement of clinical signs due to spondylosis with acupuncture treatment. One study in the Medical Journal of Australia, “Treatment of cervical spondylosis: Electroacupuncture versus physiotherapy,” showed that electroacupuncture was more effective than physical therapy in alleviating pain related to cervical spondylosis. All of this lends support to the use acupuncture to treat animals with pain and neurologic deficits in the presence of spondylosis with or without apparent underlying cause or concurrent pathology.