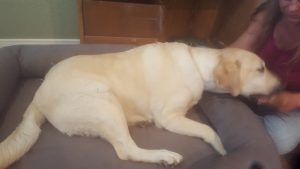 Acupuncture was included as the primary modality in the medical management of a patient with cranial cruciate rupture. The treatment plan was successful in decreasing pain, inflammation, and improving mobility in the clinical setting. When acupuncture is utilized as a tool for pain management, the quality of life is enhanced in patients. However, more research studies need to be done to determine if acupuncture could be an alternative option to surgery.

A 10-year-old spayed female Labrador Retriever was re-evaluated for a persistent lameness of the left hindlimb. The owner reported a history of trauma that occurred during play time two months ago. A loud vocalization was heard and subsequent non weight-bearing lameness of the left hindlimb followed. After the incident, the patient was evaluated at their veterinarian, and a left cranial cruciate ligament rupture was diagnosed. Their veterinarian recommended surgical repair, but the owner declined the referral. Meloxicam (3.75 mg PO QD), tramadol (100 mg TID), Dasuquin, rest, and confinement were prescribed. After two months of rest, there was no significant progress in the patient’s condition. The owner had reported panting, decreased interaction with family, and vocalization from pain. Overall, the owner was concerned about quality of life and pain management. An orthopedic surgical consult was recommended, but the owner declined and elected acupuncture treatment. In addition to the treatments, controlled exercise, at-home massage, and rehabilitation exercises were implemented. Gabapentin (200 mg BID) was also prescribed in addition to the above medications. The owner has complied with the diet recommendations for weight loss. 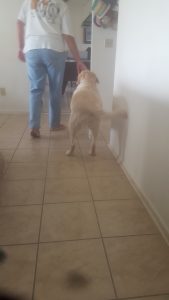 Initial observation revealed that the patient was QAR. On physical examination, the vital signs were within normal limits: T-100.2F, P-120 R-40. General appearance revealed a body condition score of 8/9 and toe-touching lameness of the left hindlimb was noted when standing. At a walk, the lameness was intermittent non-weight bearing and weight was shifted to the right hindlimb. Further examination of the stifle revealed mild pain and tenderness of the left stifle. There was noticeable joint effusion and a medial buttress was palpable. There was no clicking or popping heard or felt on palpation of the stifle. Also, muscle atrophy of the left hindlimb was noticeable. The neurological examination was within normal limits.

Myofascial examination was performed and not only revealed mild left stifle pain, but also myofascial restriction and tenderness in the right hindlimb due to compensation. The right hip region and right and left hamstring soreness were palpated, as well. Several trigger points were also found in the tense shoulders (scapular region) and along the triceps muscles on both sides. 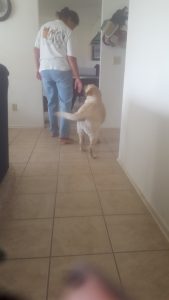 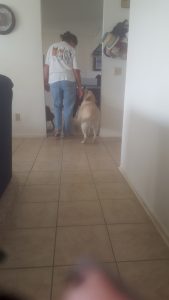 The weekly treatment included a dry needling technique with 0.20 Seirin needles for approximately 15-20 minutes. The following acupuncture points were chosen for relevant anatomy and innervations: Left and right (depending on patient position) hindlimb with emphasis on stifle – ST-34, ST-36, BL-40, B-L60, GB-31, GB-33; right stifle SP-9, SP-10; right and left hip triad-  GB-29, GB-30, BL-54; central – GV-14, GV-20, and Bai Hui. Various trigger points were addressed in the following areas: along the bladder line (near BL-11 and BL 22/23), region near right hip triad to lumbosacral area, both hamstrings, and both shoulders (scapular region) down to triceps. Gentle massage was given after acupuncture treatment focusing on any tightness or soreness. 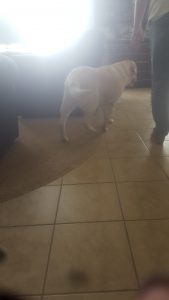 After four weekly treatments, the owner noted that there were positive changes in the patient, including decreased panting, desire to play and interact with family, and increased comfort. At the last visit, the patient was bright, excitable, and doing well with the controlled exercise and rehabilitation. On examination, there was noticeable progression from toe-touching to the complete paw touching the ground. With a trained eye, the patient was continuing to shift weight to the opposite limb. On myofascial palpation, the patient was not painful on manipulation of the left stifle and there was decreased appearance of joint effusion. The patient was still tense and uncomfortable in right hindlimb and there was slight tenderness in both shoulders. Overall, the response to each treatment was better than expected. However, after five-seven days, those positive effects noted by the owner started to subside.

Since the medications, exercise, and massage remained consistent per owner, the tapering off of positive effects could be attributed to each acupuncture treatment. The response to treatment was immediate following each session and the other modalities were likely supplemental, contributing to the outcome. There were no reported adverse events, besides expected sleepiness after each treatment.

The main goal in this case was to provide pain relief, increase comfort, and improve quality of life. In terms of palliative care, there was significant progress made and it was easily implemented in the clinical setting. In retrospect, treatments could have been performed every five days according to response to increase patient comfort. Also, supplementary modalities, such as laser therapy and electrostimulation, could have been added to enhance the effects of each acupuncture treatment.

Due to the proven benefits of acupuncture, it should be applied to cranial cruciate rupture treatment regardless if surgery is elected or not. The big question is whether acupuncture could be an alternative to surgery in canine patients. A closer look is warranted since it is known that osteoarthritis occurs after cranial cruciate rupture regardless of the treatment method chosen. In humans, a study showed evidence that patients who tore their ACL were able to return to normal activities whether they had surgery or not. Stabilization of the knee could be established with not only surgery, but also with neuromuscular rehabilitation. This prompts a closer look at our canine patients where more research is needed to determine if acupuncture and supplemental modalities could be viable alternatives to surgical treatment.