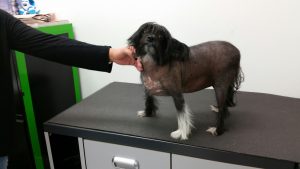 Mira, a 10-year-old spayed female Chinese Crested dog presented to Southern Ontario Animal Rehabilitation (S.O.A.R.) for extreme pain. A diagnosis of lumbar vertebral stenosis was made by the referring vet. However, her symptoms were not controlled with traditional medications. She was referred to S.O.A.R. for acupuncture, hoping it would assist with pain relief. Severe neck pain was diagnosed at S.O.A.R., and a combination of TENS, laser therapy, and acupuncture significantly reduced her clinical signs after two treatments, allowing reduction of her other medication doses and frequency.  By the third treatment, she was significantly better, and medications had been almost eliminated. 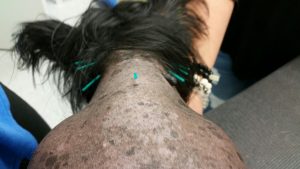 Mira presented to S.O.A.R. on Aug. 19, 2016. She had a previous history of Legg Calve Perthes Disease, which had been diagnosed and treated in Norway when she was a few years old, and there had been no problems with the leg since then. Approximately six days prior to presentation, she had been crying out in pain, so her owner took her to her regular veterinarian. They obtained two lateral radiographs of her spine. It was determined that she had stenosis of some lumbar vertebrae that were causing her pain. She was placed on Onsior (an NSAID), tramadol (2 mg/kg BID, however was being given QID), and gabapentin (10 mg/kg BID, however was being given TID). Forty-eight hours later, Mira continued to be in extreme pain, so her owner was seeking acupuncture to help control the pain. 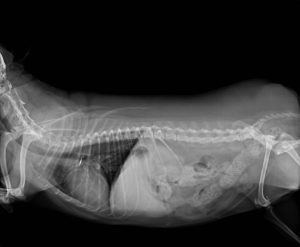 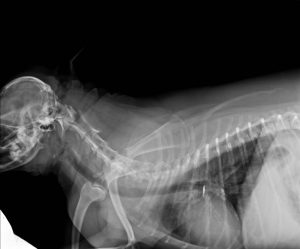 On physical examination, Mira is overweight with a body condition score of 5/5. She has a grade ¼ weight bearing lameness on her right hind leg and walks with a very stiff, cautious gait. She is hyperesthetic and becomes very tense and cries when being examined. She has visible muscle wasting in her right hind thigh, although measurements were not done at the time due to her pain status. Her neurologic exam was normal, with no conscious proprioceptive deficits or back pain. No pain was elicited on her right hind leg, although her hip extension was reduced.  Palpation of her neck musculature both dorsally and ventrally, revealed severe muscle tension. There was no passive range of motion of her head and neck, and her shoulder muscles were also ropey and tense.

Reviews of her radiographs did show some reduced intervertebral space at L2/3, L3/4, L4/5, and L5/6. However, on physical examination, Mira was not painful over this region. A closer look at her cervical region revealed an intervertebral opacity at C2/3. A tentative diagnosis of cervical intervertebral disc disease with calcification of a disc between cervical vertebra 2 and 3 was made. A recommendation to return to her regular veterinarian was made, as well as a discussion to pursue referral to a surgeon. Mira’s owner did not want to pursue this and wanted to try to see if we could relieve the pain without further diagnostics and/or surgery. 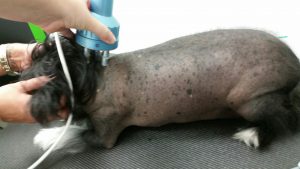 Due to the extent of her pain and tension, a multi-modal approach was recommended. Warm packs were recommended for the owner to use at home for muscle relaxation, as well as the addition of methocarbamol (44 mg/kg q 12 hrs). Minimal acupuncture points were used on her first visit due to her hyperesthesia, as well as her obesity, making landmarks challenging in some locations.  Acupuncture was combined with TENS (50Hz, 150 us, 15 minutes at level 3, normal mode) and laser (20 J over 5 minutes, class 3b superpulse). Dark green 15 mm Seirans were used at each visit due to their coated nature and smaller size.  Acupuncture points used were cervical spinal nerves, four needles on the right, four on the left, GB-20 right and left, L-I4 right and left, and GV-14.  Bai Hui and right Bl-54 were added at the second visit to try to address the right hip. By the third visit, Mira was extremely active, so minimal points were used, primarily cervical spinal nerves, GV-14, and Bai Hui.

After Mira’s first visit, her owner contacted me to say Mira had gone home and slept through the night peacefully. This was despite not yet starting on the methocarbamol. She continued to improve with each subsequent visit. On her second visit, Mira walked in much perkier, and her gait was much less cautious and stiff. Her cervical musculature palpated as stiff, but not hard. Her owner had been able to reduce the tramadol to every eight hours, and Mira was no longer crying two hours after the medication was given. Her next visit was 10 days later. She was now on gabapentin only as needed, onsior as needed (her last dose was two days prior), robaxin 250 mg every 12 hrs, and 25 mg tramadol every 12 hrs. The TENS machine had only been used once while she was away. At this visit, Mira was extremely energetic, moving constantly. She had normal range of motion in her neck and was not painful. Her owner is going to Norway, and it is unsure when we will be able to reassess Mira for her fourth visit. However, her progress is promising at this point. Her owner’s desired outcome was to reduce Mira’s pain and avoid referral to a neurologist. Although the long-term stability of her neck is a concern, relief with acupuncture was a huge part of her treatment and success.

Intervertebral Disc Disease is a painful condition. Whether the disc is bulging or has ruptured, the inflammatory reaction in the surrounding tissues is painful. Management of pain is usually controlled with either a steroid, such as prednisone or dexamethasone, or non-steroidal anti-inflammatory drug, such as Meloxicam, gabapentin, tramadol (or other opioids), and methocarbamol. Even without rupture of the intervertebral disc, surgery is often recommended due to the potential of rupture and paralysis in the future. There are few studies comparing the outcomes of surgery vs. medical management of these cases, especially with the newer options for inflammation and pain management, such as laser, acupuncture, and TENS. One study in 2008 did find that there was no significant difference between surgical and medical management of cervical spondylomyelopathy (wobbler syndrome)[1]. This was without the addition of modalities, such as acupuncture, laser, and rehabilitation. A more recent review and meta-analysis[2] looked at the efficacy of low-level laser to manage neck pain and found that laser therapy provided a significant reduction in acute neck pain.

Mira’s case is a good example of why we need to pursue medical management options for cervical neck pain. These modalities are not just limited to a replacement for surgery, but also can be applied prior to surgery to help control pain before and after surgery.