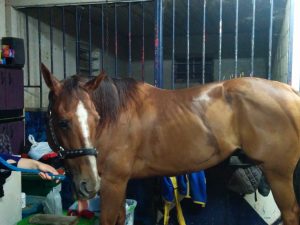 This case report is about a horse that was presented for back pain and behavioral issues. It describes the acupuncture treatments and positive clinical response of this horse to the treatment.

An eight-year-old Quarter horse mare was presented for back pain. The owner had acquired the horse only a couple months earlier. Little history was known, except that the horse had tendinitis of its left front leg, which was supposedly healed, but no precise diagnostic had been made. Other past medical history was unknown. The owner was planning to do barrel racing with the horse, but had noticed that the mare seemed sensitive on its back. The owner also reported behavioral issues when the horse was being manipulated on the left. The mare would avoid contact and pull away. 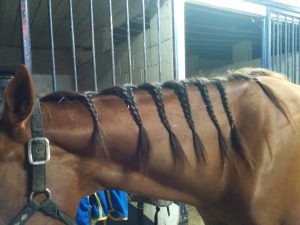 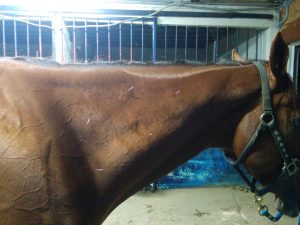 The acupuncture treatments always started with some calming points, which include LI-16, GB-21, GV-14, and Bai Hui. GB-21 was also used to help release the taut bands near that point. Bai Hui was used for its calming effect, but also for its effect on back, lumbosacral, and pelvic limb pain. Needles were applied bilaterally to ST-7 to help relieve local pain. BL-54 and GB-29 were used to help with hip and gluteal pain. The first acupuncture treatment was stopped at that point after the mare reacted negatively to a needle placement on its neck. That needle was removed, and the horse was able to enjoy the end of the treatment. For the second and third treatments, it was possible to needle more points. The previous points were all needled again, but it was possible to also needle some neck points. BL-10, SI-16, LI-17, and two cervical trigger points were needled bilaterally to release cervical pain and tension. BL-25, BL-26, BL-27, and BL-28 were needled bilaterally to help with lumbosacral, back, and pelvic limb pain. Finally, BL-14 was needled, but the horse had such strong muscle contractions that the needles fell out only one minute after being placed. The acupuncture treatments occurred weekly for three consecutive weeks. Only dry needling was used because the horse would not allow electroacupuncture. After the second treatment, the owner was taught to massage the horse’s neck daily. Ideally, some bladder points along the back of the horse and some distal limb points would have been needled, but this was not possible with this patient.

Improvement in this horse was almost immediate. The owner reported better behavior the week following the first treatment. On the myofascial palpation examination before the second treatment, the horse was much more comfortable in the neck, and it was possible to needle the cervical region, which was impossible the week before because it caused too much pain. By the third treatment, the horse would gladly present its neck for the treatment and would want to be scratched on the left side of its neck, while before the mare would avoid total contact. Because no other treatment modalities were used, the outcome is clearly a response to acupuncture. No adverse effects of acupuncture were noticed in this patient. The acupuncture treatment in this mare resolved the behavioral issues reported by the owner and contributed to making the horse more comfortable.

After seeing such an improvement following only three acupuncture sessions, it is clear that acupuncture is often underestimated, as is pain when it comes to behavioral issues. Pain is often undetected in our domestic animals, highlighting the importance of a good myofascial palpation examination. Furthermore, myofascial pain does not always respond well to standard medications, such as analgesics and anti-inflammatory drugs, while acupuncture is a beneficial tool. The article, Equine   Acupuncture:   Incorporation   into   Lameness   Diagnosis   and   Treatment1, explains how acupuncture is an interesting tool for treatment, but also for diagnostic purposes. Another interesting article about the treatment of painful horses with acupuncture is, Acupuncture Treatment of Pain along the Gall Bladder Meridian in 15 Horses2. In conclusion, acupuncture is a very useful tool to help painful horses, as was demonstrated by this case report.