Newton is a 12-year-old neutered male Ragdoll mix cat who began self-traumatizing and pulling his hair out after a traumatic injury. Newton was treated with a four-week course of oral Gabapentin and six weeks of laser and acupuncture. The behavior resolved, and his fur coat grew back in.

On March 17, he was grabbed by a new puppy in the household. The dog held his dorsal cranial thorax in his mouth for five minutes until the owners were able to remove the cat. Newton was shaved and examined for puncture wounds at the time, but none were found. Two days later, he was noted to be limping and was found to have subluxed P3 of the third digit on his right pelvic limb. Two other rear nails had been traumatically removed and were inflamed and suppurative.  Newton was started on a three-day course of Onsior and seven days of clavamox. He recovered without incident.

In late April, the owners began to notice an increasing amount of Newton’s fur on the carpet.  They later observed him pulling full mouthfuls of fur from his right flank, caudal, and ventral to the shaved site from his dog bite. This behavior continued until Newton’s flanks were nearly bare. The underlying skin was normal with no inflammation or scaling. He is non-pruritic and has no history of allergies. Newton also has a history of sacroiliac and hip pain, which has been managed with acupuncture and therapeutic exercise. 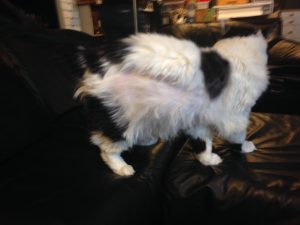 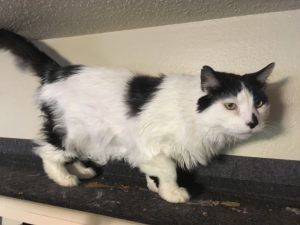 Skin: Diffusely thin hair over the right flank and right lateral thigh, underlying skin is normal with no erythema or scaling, no evidence of ectoparasites, remaining hair coat normal other than the patch on the right thorax.

The CSU Dermatology service was consulted, but no evidence of dermatologic disease was identified. Due to his lack of history of atopy and previous history of trauma, we suspect that Newton is experiencing neuropathic pain from nerves damaged by the dog bite. In an effort to self-soothe the pain, he is pulling the hair out over the area of abnormal sensation. Newton was started on oral liquid Gabapentin (10 mg/kg BID) to address the neuropathic pain and get him comfortable enough to sit for treatment. Laser was then used over the affected areas, the original bite site, and his painful sacroiliac region. Once comfortable with being handled for the laser treatment, dry needling was introduced over these regions.

The acupuncture points selected for this treatment were GV-14 at the cranial border of the initial dog bite, BL-18 bilaterally across the center of the spinal region affected by the dog bite, and finally Bai Hui and BL-54 to address his sacral and hip pain. Newton was not tolerant of many needles, so these points were selected for the greatest effect with smallest number of needles.

A full summary of treatments is provided in Appendix A.

Hair pulling continued to worsen for eight days after diagnosis and starting laser therapy and oral gabapentin. By the ninth day of treatment and first acupuncture session, no further hair pulling was witnessed by owners. Newton tolerated the acupuncture sessions well but only when using smaller numbers of needles. After four weeks of treatment, the gabapentin was discontinued but physical medicine treatments continued. Even after discontinuation of the gabapentin, Newton did not resume hair pulling and the fur began to regrow.

It can be very difficult to assess pain in cats, and our diagnosis of neuropathic pain in this case was a diagnosis made based on history of trauma and exclusion of dermatologic disease. Despite this, the symptoms resolved in the face of treatments for neuropathic pain.

Gabapentin has been proven to treat pain induced by peripheral nerve injury (Tanabe et. al, 2008). However, the drug does not work in the acute phase, instead it causes changes to spinal cord neuronal receptors that deal with chronic pain. This would explain the eight-day lag in between initiating therapy and cessation of hair pulling activity. Gabapentin does not address the underlying cause of neuropathic pain, but instead modulates the transmission of pain signals at the level of the spinal cord (KuKanich, 2013). Based on this information, we would not expect four weeks of gabapentin administration alone to correct the disease process underlying the neuropathic pain.

Studies in animal models have found evidence that low level laser therapy can speed peripheral nerve regeneration after injury (Tahktfooladi and Sharifi, 2015). Acupuncture has also been shown to speed peripheral nerve regeneration (Ho et. al, 2013). Newton’s hair pulling did not recur after discontinuing gabapentin. This suggests the underlying cause of the behavior had either resolved spontaneously during the four weeks of treatment or resolved due to the acupuncture and laser therapy provided. Our successful outcome in Newton’s case suggests that a combination of oral analgesics, acupuncture and laser therapy can be an effective treatment for self-traumatizing in cats. Further research would be necessary to evaluate how effective these treatments are in combination and in comparison to animals that do not receive treatment. This treatment protocol of oral gabapentin and weekly acupuncture and laser sessions, however, is low risk to the animal, and relatively inexpensive and convenient for the client. This may provide an easily applied empiric option for practitioners in private practice.

Takhtfooladi, Mohammad Ashrafzadeh, and Davood Sharifi. “A Comparative Study of Red and Blue Light-emitting Diodes and Low-level Laser in Regeneration of the Transected Sciatic Nerve after an End to End Neurorrhaphy in Rabbits.” Lasers in Medical Science Lasers Med Sci 30.9 (2015): 2319-324. Web.

Noticed hair loss on the left flank as well

No new hair piles noted in Newton’s part of the house, reactive over hip palpation

Newton was initially restless but settled in owners lap.  Needles removed after 10 min

Owner out of town the past week, Newton watched by pet sitter so no treatments. Newton became increasingly resistant to medicating, suggesting he is feeling better.  Gabapentin discontinued on 5/27/16

No new hair piles despite discontinuing gabapentin, Hair beginning to regrow on flanks