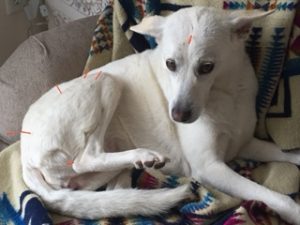 Iliopsoas strains can be a difficult muscle to treat in the canine. With the use of dry needling and electroacupuncture to increase parasympathetic stimulation, as well as trigger pointing, this muscle group can heal. Compensatory muscle pain due to shifting of gait and movement also greatly benefit from these modalities. 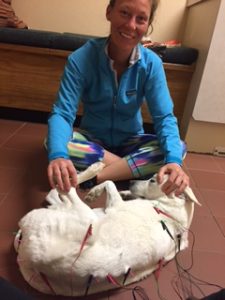 Callie, a 10-year-old FS German Shepherd/Rat Terrier mix presented for chronic short-stepping of the left hind leg for the past six months (owner’s complaint). Callie’s owner is an avid runner and takes Callie on runs daily varying from four-10 miles. Callie has had no significant prior health concerns. Callie’s injury did not limit her activity, although her owner had noticed she needs a longer recovery time after her runs, sometimes was stiff after resting post-run and asked for more breaks while on runs. 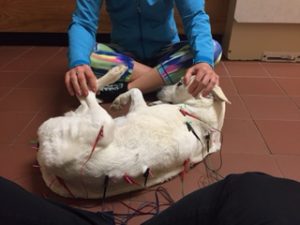 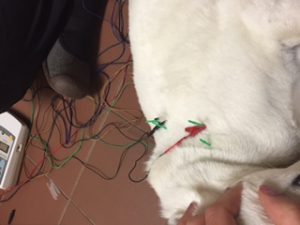 CV: no murmurs/arrhythmias-synchronous with femoral pulse

-Other: positive response on pressure palpation of iliopsoas 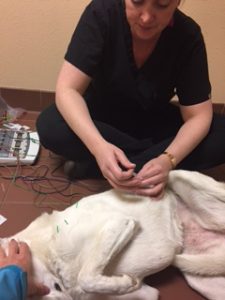 Callie was most responsive when palpating the iliopsoas region, pelvic limb, and triceps of the thoracic limb. Her nervous nature indicated trust is top priority to gain in order for success of the sessions. The acupuncture approach that was used was to stimulate calming points to ensure a positive experience and place needles in the cervical areas stimulating the parasympathetic system. Consecutive appointments incorporated dry needling of points of the thoracic and lumbar region extending into thoracic and pelvic limbs. The third treatment initiated the use of electroacupuncture to increase stimulation of the affected points. Three sessions were initiated one week apart. 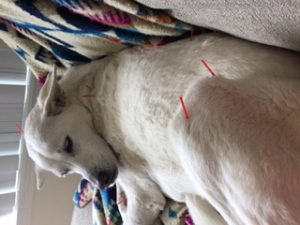 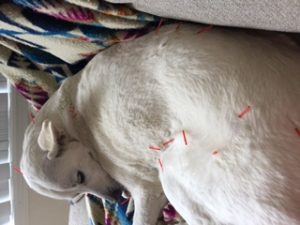 Significant improvement occurred between session two and three and then increased after electroacupuncture. Callie’s owner continued running her with the addition of stretching both pre- and post-workouts. In palpating tense muscles and observing left hindlimb placement at a walk, there was significant improvement. Adverse events that were reported by the owner included increased drowsiness for four-six hours post treatment. Callie’s owner reported the day after treatment Callie’s attitude was that of a puppy wanting to interact more and play. There continues to be tenderness in the iliopsoas region, but trigger point and fasciculations of the triceps and semimembranosus/tendinosus have significantly improved. Palpation of the thoracic lumbar area improved and increased pressure was able to be placed before response was felt.

The acupuncture treatments significantly improved iliopsoas tension and pain. Because this muscle lies so deeply connecting L-5àlesser trochanter, it is a common cause for reluctance of extension of the hip and caudal pelvic discomfort. Acupuncture in this patient shows a viable treatment for this muscle as well as enables pain modulation for other muscles compensating for reluctance of movement and shifting gaits. This patient also was a great example of how a few points emphasizing calming and increased parasympathetic response can enable trust to be built in order to progress and emphasize further therapies.