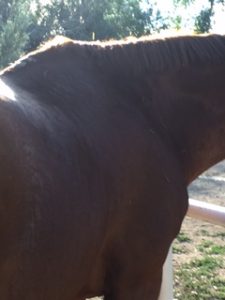 Working cattle horses commonly have sensitivities of their semimembranosus/semitendinosus and withers due to the nature of their work: digging in, stopping, and turning, as well as heavy saddles applying pressure to the withers, all promote and re-aggravate existing injuries. With the use of dry needling and electroacupuncture to increase parasympathetic stimulation, as well as trigger pointing, these muscle groups can heal. Compensatory muscle pain due to shifting of gait and movement also greatly benefit from these modalities. 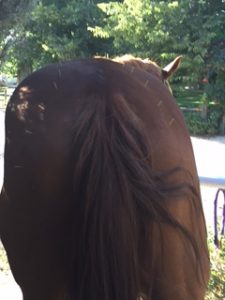 Arthur, a 20-year-old Quarter horse, presented reluctance to work and shying away from roping and moving cattle beginning a week before presentation to the veterinarian. Arthur has been working cattle daily every spring and summer for the past 15 years. He has no previous injuries. Arthur has been rested for four days and having liniment applied to his back and left hind leg where the owner assumes his major issue lies. 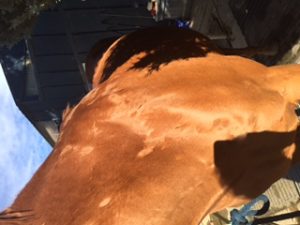 -Hoof tester and flexion: negative on both hind legs

-Pelvic palpation: positive muscle fasciculation of the semimebranosus/semitendinosus of the left side.  Positively repeated. No reluctance on extension/flexion of leg 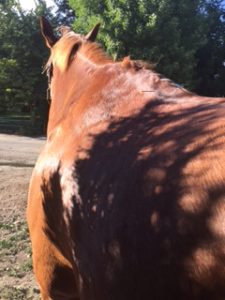 Arthur was most positive in palpation in his left pelvic limb over his semimembranosus/semitendinosus.  In addition, his withers bilaterally are extremely sensitive to palpation. On abducting his shoulder, he is mildly uncomfortable. The acupuncture approach that was used was to stimulate calming points to ensure a positive experience and place needles in the cervical areas stimulating the parasympathetic system. Consecutive appointments incorporated dry needling of points of the thoracic and lumbar region. The second re-examination showed increased sensitivity to the triceps region, which was expected for a rested animal. Two sessions were needed one week apart. A third was discussed, but Arthur’s owner was so happy by his progress he felt it was not necessary. 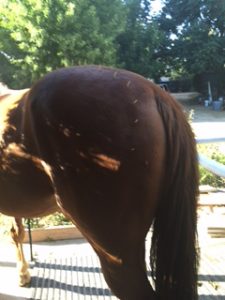 Significant improvement occurred after session one. Arthur’s owner, Joel, was so ecstatic he was looking into acupuncture for himself, as well. Joel was an integral part of homecare for Arthur. Joel worked Arthur two days before his second treatment and said he had never had Arthur work cattle better. The second examination showed mild discomfort of the triceps area, which was focused on as well as his semimembranosus/semitendinosus. I called Joel about a third treatment, and he stated Arthur was feeling and working so well he didn’t think it was needed at this time. He will stay in touch for monthly routine acupuncture as Arthur responds so well.

As discussed in AAEP: acupuncture is an essential modality to relieve pain and aid in diagnostics. The extensive list of treatment options is exhaustive but includes and is not limited to TMJ pain, sacroiliac, pelvic, thoracic pain, gastrointestinal, respiratory and neurological problems. As evident in Arthur’s case, resolution of a musculoskeletal issue was quickly resolved in order for him to benefit from and improve at his job.