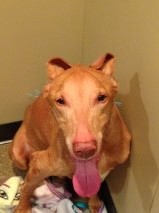 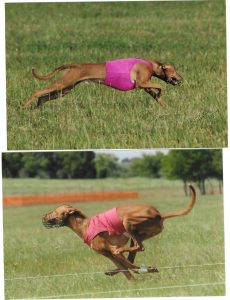 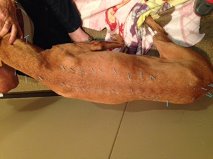 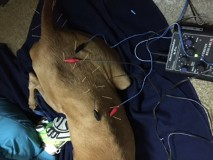 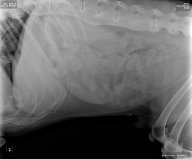 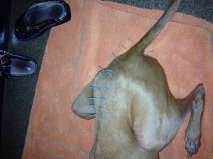 After the first of a series of treatments, there was 100% improvement of fecal incontinence, as well as an increase in attitude and mobility.

Carlos is a 13 year old Pharaoh Hound with an athletic history of lure coursing from the age of 1 1/2 years to 6 years of age. He was #1 in the American Sighthound Field association in 2005 and #2 in 2006.  After the age of 6 years, Carlos’s activity gradually decreased from racing every weekend October through April to maybe one or two times a year. Six months ago he was still playing with his tennis ball, but now Carlos lives a life of lounging around the house.

Carlos began having hip pain in May 2013 and progressively worsened to back pain and daily fecal incontinence by April 2016.  Carprofen and Tramadol had helped in the past, but not any longer.  The fecal incontinence had progressed to occurring during sleep as well as while walking in the house.

Although spondylosis is usually an incidental finding, it was suspected to be a major concern for Carlos’s pain and fecal incontinence.  Differentials included cervicothoracic spinal nerve entrapment  (tense Rhomboideus, Trapezius, Longisimus, Iliocostalis mm); lumbar nerve entrapment affecting L6-S1 Sciatic nerve roots or S1-S3 Pudendal and pelvic nerve roots. Causes for quadriceps muscle atrophy, tarsal instability and decrease inCP may be related to compressed Sciatic, Fibular, and Tibial mm. Other differentials considered were disc protrusion, neoplasia or other causes of compression of the spinal cord which may have affected the spinal nerves.  Acupuncture was discussed as an option for Carlos’s treatment of pain and fecal incontinence. Areas of interest were cervical, thoracic, lumbar, and sacral nerve roots. The pudendal nerve was targeted through the sacral nerves due to its innervation to the rectum.  Dry needling the tibial nerve channel was considered to be a major factor in Carlos’s treatment plan.

Acupuncture was initiated twice weekly.  Every session began with a 5 minute laser treatment 1000HZ (MR4.Activet) from the base of he skull to the end of the sacrum to decrease spinal cord wind up.  For homeostasis/calming effects, the points (all Seirin 0.2x30mm) used were GV20, GV14, and Bai Hui.  Most BL points of the spine were treated but initially needled BL 18-28 to treat lumbosacral spinal nerves and added in others on subsequent visits.  This area was also treated with EA (Pantheon 4cPro) at a mixed frequency  2Hz-100Hz for 15 minutes with Huato 0.2x30mm needles.  BL 27 and 28 were used to target sacral nn 1 and2 for voiding dysfunction and sacral parasympathetic nerves for the large intestine. BL 10 was aded to further decrease spinal cord wind up and tense neck muscles.   Bl13-17 covered the remaining tense muscles of the spine and nerve roots.  For fecal incontinence, points used were BL 35 (sacral spinal nn and anorectal dysfunction): BL 39 (fibular n), BL 40 (tibial nerve) for extensors and flexors of the pelvic limb and pain in the back and pelvic limb.   other points used specifically for fecal incontinence were GV1 (caudal rectal nerve which supplies the external anal sphincter muscle)  and CV 1 (perineal nerve); and bilateral proximal 1/3 of the tail to target the foramina between the vertebrae.  Tibial nerve stimulation at points K1, BL60, andSP6 was attempted with needling 9sometimes unsuccessfully) and laser (more acceptable to Carlos).  In addition to assisting in fecal incontinence, these points could also help with tarsal instability.

After the first acupuncture treatment, the owner reported no fecal incontinence and Carlos seemed to have more spunk.  Videos were taken prior to his second treatment on April 30th and after 3 treatments.  The first video shows how happy the owner is for Carlos’s improvement.  The second video shows a higher tail carriage with more wagging and a seemingly happy attitude of Carlos.  The fecal incontinence did occur infrequently, about once a week, but remarkably better than daily prior to acupuncture.  it may have totally ceased if acupuncture could have remained at twice weekly for a longer period of time.   Being that Carlos was only on Tramadol and/or Carprofen for flare ups of pain, it is believed that the acu/laser treatments are the reason for the remarkable improvement of Carlos’s mobility, happiness and decrease in fecal incontinence.

Another prospective study involving electro acupuncture found that “EA at S2-3 and perianal region could improve patients voiding abilities”.  (Zhishun Liu; Evidence-BasedComplementary and Alternative Medicine Vol. 2013 Article 543174) In Carlos’s case, the sacral nerve roots, sciatic, pudendal and tibial nerves were major targets for his incontinence.  It isn’t known if one single area (K13 tibial nerve) vs stimulation of multiple areas would have been as beneficial for fecal incontinence. However, it is highly suggestive that the combination of points and modalities used directly influenced his mobility, well being and reduction of incontinence.