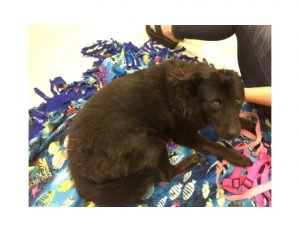 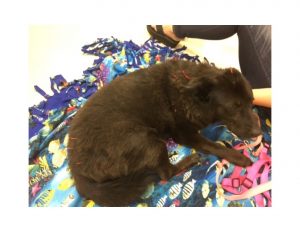 Piper is a 12-year-old female spayed Shepard mix that was initially seen on 9/28/16 for cervical pain. Blood work and radiographs were performed which were unremarkable. Piper was given a 2mg injection of Dexamethasone-SP and was discharge with Prednisone (10mg PO BID), Methacarbamol (1000mg PO TID x 1 day then 500mg PO TID) and tramadol (100mg PO TID). Owner was instructed to give medication for two weeks and strictly limit pet’s exercise. Owner saw no improvement of pet’s stiffness and pain after three days of medical management. On October 1, pet started to decline and had difficulty walking.

Piper was seen on October 1, for acupuncture therapy at VCA Arroyo. Piper’s owner had just started her on essential oils (Peppermint, Frankincense, Ginger, Vetiver) the night before and noted that Piper still seemed painful, but was less anxious. The owner noted that Piper was eating and drinking well, had no vomiting or diarrhea and hasn’t had any health concerns up until now.

Pet was quiet, alert and responsive and was pacing around the room. Pet was panting and anxious. Thoracic auscultation – no murmurs or arrhythmias, strong femoral pulses, clear bronchovesicular sounds with no crackles or wheezes.

Neurologic exam findings – Asynchronous gait with a stiff choppy gait in pelvic limbs, mild pelvic limb ataxia, intact conscious proprioception of all limbs, lordosis of TL spine, head lowered, no resistance to flexion/extension or turning of the head to the right or left.

For Piper’s first acupuncture session I wanted to address three areas of concern – her pelvic limb ataxia, trigger points in her cervical region and shoulder and pain especially in the left shoulder. 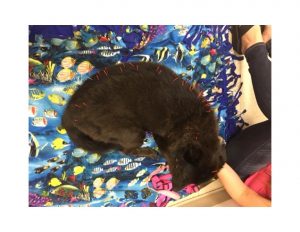 Piper’s therapy consisted of dry needling and massage (effleurage and skin rolling techniques used). In addition to dry needling Piper would have also greatly benefited from laser therapy; VCA Arroyo does not have a therapeutic laser as of yet. Piper’s treatment regime is one session per week for one month, then if she is doing clinically well we will decrease treatments to every other week for five-seven weeks and again to once per month or less based upon Piper’s status. Piper is currently about to complete her first month of acupuncture sessions. Each acupuncture session is 30-40 minutes in duration (needles removed after 20 minutes). During Piper’s first acupuncture session Seirin needles were used (0.16 x 30mm); since she was such a great acupuncture candidate and did so well after the 1st session, Seirin (0.2) x 30mm needles were used at subsequent sessions.

After Piper’s first acupuncture session, she seemed less anxious and the owner noted moderate improvement in pet’s stiffness and pain 24 hours afterwards. Piper’s owner also noted that Piper was more subdued and slept for the majority of the day after that session. During Piper’s second and third acupuncture sessions she became much more relaxed and halfway through she went from standing to laying down and even laid her head in the owner’s lap and closed her eyes. Pet even stretched (bow posture) at the end of her third session less than one week ago. Owner stopped pet’s tramadol, prednisone and methocarbamol shortly after the first session (three-four days of medical therapy) and owner noted that pet’s pain and stiffness are significantly decreased and are well controlled at this point. No adverse events from acupuncture have been noted in Piper.

An important lesson from this case is the analgesic benefits of acupuncture and that it can have as much pain relief as pharmaceuticals (1-3). Acupuncture also has less side effects when compared to common pain relieving medications (1). Without acupuncture Piper would have likely been on prednisone, methacarbamol and tramadol for a minimum of two weeks. There is even a chance that Piper may not have improved as quickly or could have relapsed on just medical management alone. Piper was on her medications for five days prior to discontinuing; the owner stopped because she wanted to pursue a more holistic treatment and to see if Piper improved on acupuncture and essential oil therapy. Piper is doing better than the owner expected on acupuncture alone – her pain is well controlled, her ataxia resolved after the first session, and she is more active/energetic.