Purkinje is an 11-year-old castrated male Border Collie. He presented for acupuncture with a history of osteoarthritis in his hips, thunderstorm phobia, and intermittent anxiety. He underwent four sessions of acupuncture combined with the use of a Class 4 laser. During the course of his treatment, his owner observed and described changes, including Purkinje’s lack of hesitation when jumping into her SUV. 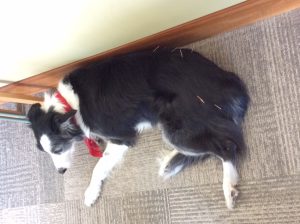 Purkinje was adopted from the North Carolina Border Collie Rescue in December 2012 when he was at least eight years old (estimated due to lenticular sclerosis). When he was adopted, he had little known history but was a BCS or 3/9, had severe dental wear, and was painful on bilateral hip extension. Since his adoption, he has lived in multiple locations throughout the United States. His recent medical history includes minor dental extractions and root canals. Since his adoption, he has worsening osteoarthritis in his hips, causing him to hesitate when he jumps into the SUV. He is known to have motion sickness, intermittent anxiety, and thunderstorm phobia. Current medications included ondansetron +/- maropitant for long car rides, occasional trazadone for storm anxiety, occasional gabapentin for osteoarthritis, Dasuquin daily, and monthly Sentinel and Frontline Plus. He lives with the same housemates since he was adopted: two male cats and a female bearded dragon. 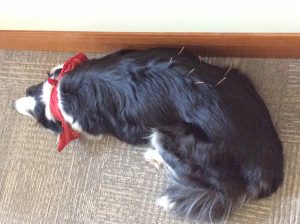 Upon physical exam, Purkinje had a body condition score of 4-5/9 and is symmetrically muscled. He had bilateral lenticular sclerosis, severe dental wear throughout his mouth; no nasal, ocular, or auricular discharge. His lungs and heart ausculted normally. There was no pain on palpation of his abdomen and no organomegally was noted. He had pain on manipulation of his hip joints; however, no pain was elicited from palpation of his long bones. He had a full healthy coat. He was mentally appropriate and had a normal neurologic exam. Myofascial exam showed increased sensitivity along his spine in the location of the caudal thorax through the entire lumbar region (lumbar > thoracic). 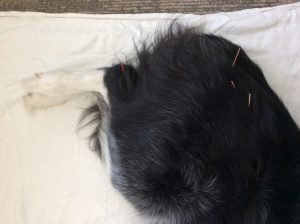 Based off of Purkinje’s history, I wanted to focus on the osteoarthritis in his hips but I didn’t want to disregard his history of intermittent anxiety. I chose this treatment plan based on the fact that the owner would be able to see results from his treatments focused on his osteoarthritis easier than by focusing on treating intermittent anxiety or thunderstorm phobia. The points used for each treatment revolved around the same foundation points: hip triad, inner bladder line, Bai Hui, and local points where he seemed painful during pre-treatments myofascial exams. Additional points varied (GV-20 vs. Yin Tang, etc.) and the number of points and side the needles were placed (left vs. right) varied based on Purkinje’s level of comfort and tolerance at each treatment. The treatments took place every other day for four treatments to gauge if and how Purkinje would respond to treatments. This treatment schedule was tailored around the owner’s and my work schedule. Dry needling was used for all treatments and laser treatment was based on availability of the laser. 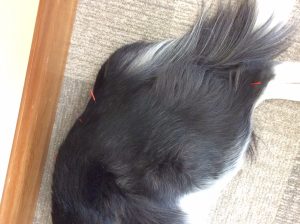 Here are a few thoughts from Purkinje’s owner: “After the first treatment, I didn’t notice much until I started watching how Purkinje would jump in the car. I have a Toyota Rav4, and for several months he would (increasingly, and more consistently lately) hesitate before jumping into the back from the ground. I initially figured this was because I started parking on the side of the road, and he would hesitate because of the gap between the sidewalk and the car. I don’t think this is true though, because he even hesitated on even ground. After the first treatment (and subsequently since), he rarely if ever hesitates to jump up into the car. I really do attribute this to less painful hips due to the amount of power/propulsion he needs to jump from the ground. I didn’t really add meds to his regimen, so the only change was the acupuncture/laser therapy.  Further, I brought it up to my boyfriend, he said he had already noticed it as well.”

Based on my own observations, Purkinje was a bit more agitated/submissive on the second treatment; he would roll onto his back and would not tolerate a long treatment. However, this mostly resolved after the second treatment. I would also notice that he would retreat to his usual spot against the wall after the needles were placed; I think this was his comfort zone. On the fourth treatment, Purkinje relaxed enough that he almost fell asleep. With each myofascial exam, I noticed a decrease in the amount of reaction along his thoracic and lumbar spine. He always seemed energized after the treatments, wanting to play with his soccer ball.

Due to the fact that Purkinje was not consistently taking pain medications, the results of him being able to jump into the car without hesitation was most likely due to his treatments. However, it is important to remember that the mainstay of treating chronic pain, like that seen with osteoarthritis, is via the use of NSAIDs 1; therefore, I would suggest that he be placed on a treatment regime that includes the daily use of an NSAID in addition to continuing acupuncture and laser therapy. This further supports the fact that acupuncture is a valuable adjunctive therapy but is not necessarily meant to be used as a stand-alone therapy in most circumstances 1. One study that used acupuncture on a colony of chimpanzees with stifle arthritis revealed that acupuncture resulted in an improvement in mobility 2. Based on their results, they concluded that “acupuncture not only may provide additional pain-relief benefits, but its use potentially can minimize the use of drugs when concerns arise regarding safety” 2, further supporting a multimodal approach to treating osteoarthritis.  Quickly seeing a clinical response in Purkinje in just four treatments proves that it would be beneficial to treat hip arthritis in a general practice setting. Going forward, I would like to continue doing once to twice weekly acupuncture followed by therapeutic laser but also incorporate electrical stimulation if Purkinje tolerates it.

2  Magden et al. “Acupuncture as an Adjunct Therapy for Osteoarthritis in Chimpanzees (Pan Troglodytes).” Journal of the American Association for Laboratory Animal Science. 2013. Web. 31 May 2016.