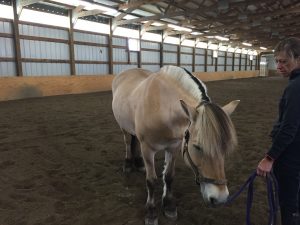 A 14-year-old Norwegian Fjord horse mare was presented for intermittent lameness of the front right limb. Two series of acupuncture were performed, resulting in improved trigger points, though the lameness did not resolve.

Amee has a chronic history of intermittent right forelimb lameness over the past three years.  Amee is used for intermediate dressage and light trail riding.  Initially, she came up 2/5 lame on her left hindlimb about three years ago.  She was worked up by the  ambulatory service, had a regional MRI performed, and received a steroid injection with two series of shockwave therapy.  Her lameness was contributed to suspensary desmitis.  Her lameness resolved in her left hindlimb, but within a few months, she developed an intermittent lameness in her right front limb. Owner would like to use Amee for continued flatwork.  Client has a regular veterinarian involved in the management of the lameness, but would like the opinion of someone with acupuncture training.  Amee is stalled at night, but turned out into a paddock during the day with one-two other horses.  Her lameness is intermittent and appreciated when she is worked under saddle. The client reports that the lameness is worse when the patient has been stabled without paddock turn out (after a stormy day). 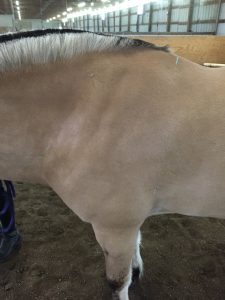 Physical examination indicated that the patient most likely has a distal limb/hoof involvement in the lameness, as well as proximal muscle component.  This would fit her history as she tends to be worse after periods of rest (stalled during thunderstorms).  The client is currently working with another veterinarian for management of the lameness, so my results corroborated his.  I will not be directly involved in the workup and management of the distal limb component, but can address the proximal muscle changes with acupuncture. Will continue with acupuncture treatments, monitoring myofasial changes, and relaying my findings with the primary veterinarian.  Would like to have weekly acupuncture treatments, but due to client’s schedule, we will do every two weeks.  After my second examination, I recommended avoiding work under saddle during the next two weeks, but continue to have access to outdoor paddock.

Initial Treatment: Had not performed acupuncture on this patient before, and also did not know if she had an acupuncture history, so I focused on calming points for today’s session. I placed GB-21, LI-16, and Bai Hui.  She began to relax deeply and settled into her acupuncture points.  I continued on to target trigger points and areas of tension (LU-1, BL-11, BL-13, triceps trigger point, BL-21, BL-23, BL-25, Dr. Holt’s BL-26, BL-27,  the hip triad (GB-29, BL-54, GB-30),  ST-36, and BL-36.  She was mildly reactive with the limb needles, so I decided to avoid placing any more distal needles on our first appointment.  This appointment consisted of dry needling (do not yet have laser or electroacupuncture).  This patient would be a great candidate for laser, and I would target her back, as well as her right forelimb, from proximal scapula down to carpus).

Over the two-week period the client described the lameness as improving, but not resolved.  Patient did not receive any other treatment during this period, and continued with her normal schedule (stalled at night, and outdoor paddock during the day).  Suspect that acupuncture helped her relieve the tight, proximal muscle components of her lameness, but did not address the distal limb component of the lameness.  Plan is to continue with acupuncture treatments, and at our next appointment we will assess saddle fit (did not have correct blankets at last appointment, client opted to wait until she had all of her normal gear). Will continue to assess patient under saddle for a brief period prior to treatment.  The primary veterinarian on the case is now treating for white line disease with a recommended ferrier.  Radiographs do not show any rotation of the distal phalanx.   Literature recommends acupuncture for diagnosis and control of distal limb pain (Xie, 2011), to specifically address hoof and heel pain. Recommendations include PC-1 and LI-18, with more information gathered from BL-13/BL-15, and BL-25/BL-27 (these points may associate with medial/lateral pain).  White line disease can progress into palmar rotation of the distal phalynx due to hoof wall separation, so serial monitoring of lameness and hoof pain are important (O’Grady, 2011).  Treatment includes the tincture of time, with pain management being an important component for appropriate biomechanics to allow for healing.