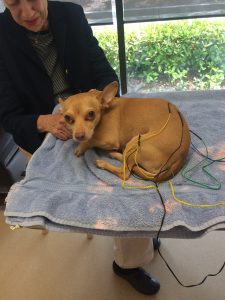 Aldo is a Chihuahua who presented for acute paresis of the rear legs. After the completion of his treatments, he has regained all of his normal function, including jumping onto the couch.

Aldo is a 4.5-year-old M/N Chihuahua mix. The day prior to his initial exam, he appeared slightly ataxic but was otherwise normal. Aldo fell while trying to get into the car 10 days previously, but had been eating, drinking, and otherwise acting well. The owners were unsure about his eliminations. He had no other known medical conditions and was not on any medications. He is current on his vaccinations and is on monthly flea and heartworm prevention. The owners also have Aldo’s biological mother; and she and Aldo get along well at home. 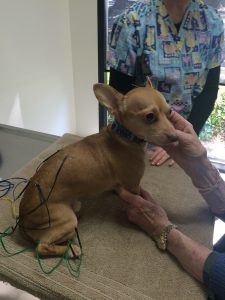 Upon physical exam, his vitals were all normal. He was ambulatory x 2, and was dragging his rear legs when the owners would put him down. He had positive withdrawal bilaterally and positive pain bilaterally. He had no panniculus at any point on his back. When held up he had CP deficits bilaterally. He has a kyphotic back normally, bending at the T-L junction, giving him a hunched appearance.  He had trigger points bilaterally along his spine from T-11-L-6. His triceps were tight bilaterally and he had mild muscle fasciculations when his neck was palpated. He had radiographs performed at this exam which revealed a calcified disc space between L-6-L-7, narrowed L 11,12,13, narrowed L-S junction.

He was put on steroids, tramadol and limited activity for three weeks before acupuncture was initiated. He improved slightly but then his progress halted. At this time, I was given approval for Aldo to be my case study.

At his first visit, I chose to just do dry needling because I wanted him to become comfortable with having needles put in and to not be over stimulated. He came weekly for four treatments. Electroacupuncture was added to treatments 2-4 in order to stimulate the points more vigorously, increase blood flow and circulation, stimulate nerves and to hopefully achieve normal function sooner.

At the initial visit, I chose GV-14, GV-20 for their relaxation benefits and to try to boost his immunologic function. I chose LI-4 and ST-36 (bilaterally) to bolster the immune system and to decrease the inflammation in the spinal cord. Bai Hui was used in order to help the neurologic dysfunction in the spinal cord. BL 39, 40(bilaterally) were chosen because of their ability to help with pelvic limb paresis by increasing sympathetic tone in the spinal cord. Locally, I chose trigger points in the caudal thoracic and lumbar spinal areas. I used 20 Kingli brand uncoated (0.22x13mm 34# 0.5′) needles.

At subsequent visits, I used the same points, only varying with different trigger points along the thoracolumbar spine. Electroacupuncture was connected from ST 34-36 bilaterally and Trigger points around the TL junction to trigger points around L4. The machine that I have is a JM 2-A ,7 lead unit. I started Aldo at one on all four dials and at a high frequency. At five-minute intervals, I turned up the intensity ending up at two on all four dials. The frequency was decreased between the 10 and 20 minute marks.

At Aldo’s first electro acupuncture visit, he stood for the first 10 minutes and then laid down. At his last two visit, he laid down and became comfortable immediately.

Aldo improved clinically following each acupuncture session. His owners reported less ataxia in his gait, more willingness to move around, and after the later sessions, a desire to jump and return to normal behavior. He was still on prednisone (5 mg ½ tablet every other day) during his first acupuncture treatment but then the prednisone was stopped for the additional three treatments. Aldo still had some CP deficits at the initial exam and had an ataxic gait. He always had pain sensation. His hind end swayed slightly when he walked and his back, left leg buckled occasionally when he turned to the left.

After the second acupuncture treatment when electrical stimulation was added, the owner reported that Aldo was completely normal following treatment. His gait had returned to how he was prior to the injury.  He began running and attempted to jump after that second treatment and did not regress during subsequent treatments.  Aldo no longer had any deficits and his left leg was stronger. He did not falter when he turned and was no longer ataxic. His back remains kyphotic, but owner reports that this is normal for him.  During his course of treatment, he was not on any medications, other than what was stated above. The owner was not doing any rehabilitation at home or elsewhere, nor was he being treated by any other veterinarian.

Aldo’s case helped to demonstrate to me the benefits of acupuncture. He was seen for about a month prior to starting acupuncture and treated with traditional methods of medication and rest. Even though he did show signs of improvement, he was not able to return to 100 percent normal function.  Once the acupuncture was started his improvement progressed, especially after the use of the electrical stimulation, and he did return to normal function.  There is evidence that electrical stimulation with acupuncture provides more clinical improvement than either surgery or surgery with electrical stimulation. (1)  I think this is clinically important because acupuncture is something that I can offer to all patients and it does not carry the side effects and financial burden of surgery.  There is also evidence to support pain management and control by needling distant myofascial trigger points. (2) Aldo demonstrated an increasing level of comfort and decreased amounts of pain as each session continued. By his third session he was able to lay down and relax and the owner reported that he seemed to feel better and act more playfully after each session.

Aldo’s case demonstrates the beneficial effects of dry needling and electrical stimulation acupuncture. In the future, I now will be able to offer acupuncture at the first visit. I think that this will help to reduce pain and stimulate a more rapid recovery in my patients.