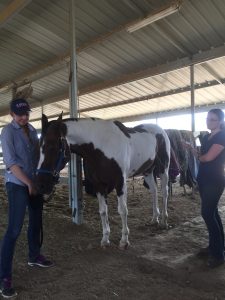 Cochise, a 31-year-old Paint gelding, was treated three times (once a week) over one month for pain associated with arthritis and anxiety. Acupuncture treatment was done once a week for three weeks, then another treatment was done three weeks after the third treatment. During this time, the owner observed an increase in movement, increased desire to go out to turnout, and the ability to roll. Based on this response, it is likely that the acupuncture treatments were helping with Cochise’s arthritis pain. 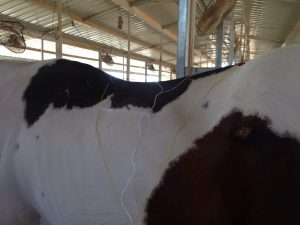 Cochise is an old horse and over the last several years, his owner has noticed a decrease in his level of voluntary activity. He has a presumptive diagnosis of degenerative joint disease in his carpi, fetlocks, pasterns, hips, and likely other places. He has not had radiographic confirmation of his arthritis due to cost constraints and the fact that he is retired and does not need to do any work anymore. He was maintained on Previcox.

On initial physical exam, Cochise’s vitals were normal, heart and lungs auscult normally, and digital pulses are normal. Blood work had not been run. He moved stiffly when walked out of his stall and was slightly lame on the right front. His body condition was 3/9 with significant muscle atrophy especially around his muscles of mastication, hips, and chest. He does not have any trouble eating.

On myofascial exam, he was significantly reactive along his entire back from BL-13 to BL-26. He was also reactive across his hips and his brachiocephalicus muscle was sore (right side more then left side). 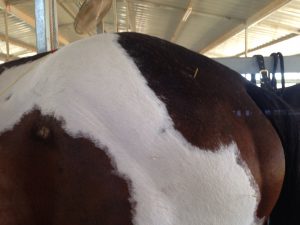 First treatment: GB-21, LI-16, LI-17 were used as introductory and relaxing points; SI-9 was used for local pain; BL-54, GB-29, GB-30 were used for hip pain; BL-40 was used to help cover other sources of hind end pain; ST45 was used as a distal point; BL 17,18,25 were used to address his back pain with electroacupuncture run from BL-18-BL-25 bilaterally (five minutes on low frequency, five minutes on high frequency).

Second treatment: There was a more dramatic difference in reactivity between right and left on this day with the right more sore. His back was sore from BL 15-25 and his right brachiocephalicus was more sore then previous. The entire left side of his body was somewhat improved. Again, LI-16 and GB-21 were used as introductory/relaxing points. ST-10 was used for local pain. TH1 was used for foot pain. BL-52, GB-29, and GB-30 were used for hip pain. BL-15 was placed on both sides, BL-25 was placed on the left, he was significantly adverse to BL-25 on the right on BL-26 was used on the right then eletroacupuncture was connected from BL-15 to BL-25 on the left and BL-26 on the right (five minutes on low frequency, five minutes on high frequency).

Third treatment: Cochise’s back soreness was improved this day especially on the left where he was only really sensitive at BL-19 and PC-1. On the right he was improved, but still sensitive from BL 21-23 and at BL-13 and PC-1. His neck soreness was significantly improved, but still present. LI 16,17, and 18 were used for neck pain along with GB-21. TH-1 and ST-45 were used for foot pain and as distal points, PC-1 was used for local pain. BL 13, 18, and 25 were used for back pain and BL-54, GB-29, and GB-30 were used for hip pain. BL-40 was added for hind limb pain. Electroacupuncture was run from BL-18-BL-25 (low frequency for five minutes, high frequency for five minutes).

After the second week of treatment, the owner reported that Cochise was excited to go out to his turnout every day. Previously he had been reluctant to walk out to the paddock and would mostly just stand and look back towards his stall while he was out. In comparison, he was now eager to go out, walking around outside and exploring the paddock, and he even rolled in the dirt. His owner was very pleased to see him roll, before starting acupuncture treatment she had often seen him act like he wanted to roll then change his mind at the last minute. It had been a long time since he had laid down for any reason.

After the third treatment, Cochise’s owner reported that he was so comfortable that they had stopped his Previcox and he was doing well without any pain medication. By about two weeks out from his third treatment he was becoming sore again. They do not want to keep him on NSAIDS if there is a good alternative so they intend to continue acupuncture treatments twice per month.

I was very pleased with the outcome of this case. Osteoarthritis is a chronic condition that cannot be cured by acupuncture (or any other means), but acupuncture clearly made a huge improvement in Cochise’s quality of life. Not only did acupuncture improve his comfort level, it allowed him to stop being treated with long term NSAIDS which comes with the risk of ulcers and kidney disease.