Trauma in a 7 Year Old Rooster 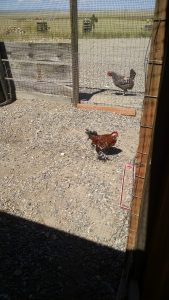 The patient, a mille fleur rooster, presented for treatment after being attacked by a puppy and then another rooster. The mille fleur was stressed, depressed, and sore. After two treatment sessions using needles and a laser pointer to activate acupuncture points, the patient returned to normal activity.

The patient is a seven-year-old mille fleur rooster that lives in a “free range” chicken coop.  The flock is used for egg production for the family that owns them.  On 7/21/16, the rooster was cornered and mildly chewed on by a puppy. The patient was too stressed after the insult so he was placed in isolation to calm down.  The next day, the rooster escaped into the general chicken population and was attacked by a larger rooster.  The patient escaped, but was subsequently caught by the puppy once more. Upon retrieval, he was placed into isolation again. The patient has no known history of other traumas or relevant medical problems. 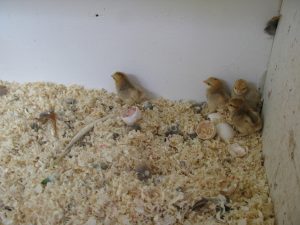 Upon primary exam, the patient appeared stressed and sore, but in otherwise good overall health. He had a BCS of 2/3, good muscle symmetry, no parasites or discharge noted, a straight keel, normal crop, and no masses.  Apart from depression, the rooster had a normal neurological exam.

Noted signs of stress included increased heart and respiration rates, panting/open mouth breathing, and closed eyes, with his comb folded over to the right and fluffed-looking feathers.  Soreness presented through his posture; he was lying down, hunched, and did not want to move.  His feathers were ruffled, he had bruising along his sides and a cut on the left lateral side of his comb, and his myofascial exam showed discomfort throughout his wings, back and sides, and synsacrum. 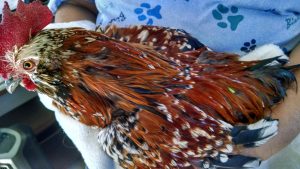 Since the patient showed signs of stress and pain from his trauma, the treatment plan focused on decreasing his stress, helping him calm down, and treating his inflammation and pain. The acupuncture points used were chosen for calming and anti-inflammation by balancing autonomic nervous system stimulation and engaging the myofascia around points of trauma and tautness to treat pain, increase blood flow, and release neurochemicals for healing. 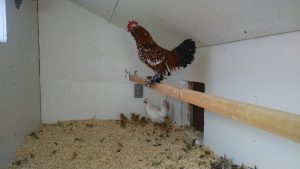 The biomodulation and myofascial justification for the points used are as follows:

–          Synsacrum points: the synsacral nerve plexuses (lumbar and sacral) have parasympathetic innervation of internal organs. These points seem to have a calming effect when used.

–          BL-60: stimulates the fibular and tibial nerves. Used to treat back pain, shoulder and wing pain, and neck stiffness through myofascial relaxation and nerve stimulation.

–          ST-35: stimulates the femoral nerve and is thought to decrease inflammation. 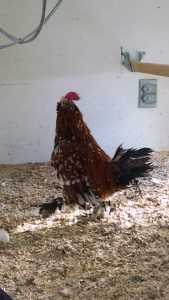 Following the trauma, the patient was stressed and hiding; he also appeared depressed and painful. During the first treatment with dry needling, the rooster started to perk up. He became more responsive for his owner and more active over the next few days. His comb had come about halfway up by the time of the second treatment. During the second session, the patient was more responsive, more active, and appeared less stressed. The next day, the rooster’s comb was completely up, and he had returned to his normal activity.

Earlier in the summer, the puppy involved in the trauma had “played” with several other chickens. Those that survived the initial trauma died within three days, having only received isolation for treatment. This patient, however, received acupuncture and laser treatment on top of spending time in isolation. The change in protocol proved beneficial; the patient began to show signs of improvement during his treatment and continued to recover over the course of the next 24 hours.

The patient survived and is doing well. He has since fathered six new baby chicks.

This case presented me with a great opportunity to expand my skills of using acupuncture to treat a species that I would otherwise not handle. Until now, I had not worked on birds outside of a classroom setting. I now feel more confident in offering aid to this group of animals. 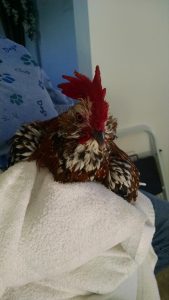