Uveitis, Blepharospasm and Epiphora in a 39 Year Old Haflinger 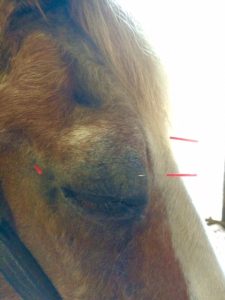 Barron is a 39-year-old Haflinger gelding who was presented for a three-day history of blepharospasm and epiphoria. He has a history of recurrent uveitis that has been historically treated empirically with pain management and eye ointment. On exam, presenting complaint of blepharospasm and epiphora were confirmed with a clear discharged noted from the right eye with moderate swelling to the eye lids. Fluorescein stain did not reveal any abnormalities to the corneal epithelium. In addition, there was minimal to moderate corneal edema with episcleral congestion. Barron was treated with acupuncture for ocular pain as well as compensatory cervical pain, Neo-Poly-Bac eye ointment and oral Flunixin. Significant improvement was seen within 24 hours in both the blepharospasm and epiphora. The corneal edema had also decreased in severity. The eye was overall less swollen and Barron was willingly keeping the eye open. The multimodal approach here was clinically more effective than previous treatments using only eye ointment and oral anti-inflammatories.

Barron is housed by himself in a stall with 24-hour access to pasture and has nose to nose contact with other horses over the adjoining fence. Previous medical history includes Equine Pituitary Pars Intermedia Dysfunction (Cushings) which was diagnosed several years ago. He was briefly treated with Pergolide at the time of diagnosis but since has been untreated for this condition. Due to his Cushings, he suffers from recurrent skin infections and vision disturbances. He is not on any current medications, only Cosequin to support joint function.

Upon physical examination, Barron’s heart rate, respiratory rate and temperature were all within normal limits (24 bpm, 20 bpm, 99.8F; respectfully). His coat and muscling were abnormal. He had patches of sparse, short hair with moderate scale and other areas on long, thicker hair. He had muscle wasting along his topline, chest, and gluteals, with a somewhat pendulous abdomen appearance. His carpi and hocks have obvious arthritis and boney proliferation. His gait was stiff and slightly off balance but with normal proprioception. His gait is most likely the result of his arthritis and muscle atrophy. Other than his gait, his neurologic exam was relatively unremarkable. Myofascial palpation included mild trigger points on either side on the sacrum and tight bands along the cranial cervical region, most notably on the left.

Menace in the right eye could not be evaluated due to blepharospasm. The only other abnormality noted was his left nostril was higher set than the right and his upper lip was slightly turned to the left. However, facial nerve sensation tested equally on both sides. The facial nerve on the right side is most likely weakened, but not fully dysfunctional. Lastly, the right eye was evaluated for the presenting complaint of blepharospasm and epiphora. A clear discharged was noted from the right eye with moderate swelling to the eye lids themselves. Fundoscopy and tonometry were not available but a fluorescein stain did not reveal any abnormalities to the corneal epithelium. At the time of the exam, there was only minimal to moderate corneal edema with episcleral congestion. There was no additional laboratory or imaging evaluations made.

The main approach to treatment was focused on stimulating the immune system and controlling inflammation. Since the corneal epithelium was intact, meaning I was most likely not combating an infection, it allowed me to focus to decreasing inflammation and pain management, two of the fundamental treatments for uveitis.  Regardless of the underlying cause, aggressive treatment is necessary to minimize damage from intraocular inflammation. With that being said, I focused my acupuncture treatments at the source of the problem for the best response; around the eye itself. In addition, I also focused on subsequent affected areas from the blepharospasm and guarding the eye. The cranial cervical region was found to be stiff and sensitive.

Points were chosen for somatic and autonomic input. As an introductory point, I used GB-21 bilaterally. Next, I focused on referred pain throughout his cranial cervical region including BL-10 and GB-20 on each side. GB-20 also provided stimulation for eye problems. Local somatic points for the eye included BL-2, GB-1, and TH-23 on the right only. These points were used for blepharospasm and targeted the facial and trigeminal nerves. For additional vagal input, ST-36 was used bilaterally for immunomodulation and for its anti-inflammatory effects. For all of these points, dry needling was preformed using J-Type 0.16 Seirins. A total of four treatments were completed, twice on the day of presentation, eight hours apart and then once a day for two days. Adjunct treatments included twice daily Neo-Poly-Bac eye ointment for three days and 0.5mg/kg oral Flunixin given once daily for three days. A fly mask was also worn for several weeks following presentation to protect the eye from flies and light sensitivity.

Significant improvement was seen within 24 hours in both the blepharospasm and epiphora. The corneal edema had also decreased in severity. The eye was overall less swollen and Barron was willingly keeping the eye open. A menace response was elicited at this time from the right eye. In previous episodes of uveitis, he was treated with only oral Flunixin and the Neo-Poly-Bac eye ointment. It took on average three days for considerable improvement to be seen in swelling, comfort and ocular discharge. While there are no measurable quantitative improvements, with the addition of acupuncture, the speed of recovery significantly increased and Barron was noticeably more comfortable within 24 hours. Standard of care includes the use of Flunixin for inflammation; however, the dosage was lowered when used in combination with acupuncture. This combination not only had a positive effect on the comfort of Barron, but proved to be safer, lowering the NSAID dosage, and therefore lowering the risk of its adverse effects. For further immunomodulation, additional points could have included LI-11 and GV-14. From this case, it is shown that acupuncture can be used as an adjunct to conventional medicine in the treatment of uveitis. Acupuncture provides another modality for pain management, either lowering doses of NSAIDs or combating pain in a different direction. This may also be used in clinical practice when faced with financial constraints. Providing multiple modalities in the treatment of uveitis will give value to a practice and possibly provide the opportunity for future acupuncture treatments.

Hulea, Călin I., and Romeo T. Cristina. “Acupuncture as a Therapeutic Tool in Health Disorders
in Animals: a Review.” Scientific Papers Animal Science and Biotechnologies 45.2 (2012):
166-177.