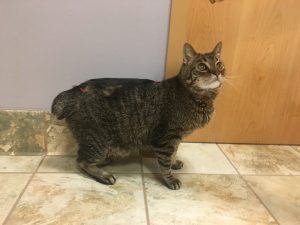 Mr. Snuggle Bugs, a 13-year-old male castrated domestic short-haired cat was presented for an initial acupuncture/laser evaluation due to recent episodes of inappropriate urination, suspect related to difficulty getting into litter box. Mr. Snuggle Bugs has an extensive medical history which includes: mitral and tricuspid regurgitation, renal insufficiency/chronic kidney disease, and diabetes mellitus as well as a prior tail amputation/trauma prior to adoption, intermittent constipation, episodes of vomiting. Physical examination revealed spinal and hip pain and generalized muscle atrophy with more significant atrophy of hindlimbs.

Treatment was aimed at parasympathetic stimulation for episodes of constipation and vomiting as well as spinal and hip pain with a combination of Companion laser therapy and acupuncture. Following treatment, Bugs had significant gaps between inappropriate urination and decreased frequency of vomiting. He did have some vomiting a few days after one acupuncture session, but at home blood glucose testing revealed hypoglycemia and it seems that the episode of vomiting was related to hypoglycemia. Bugs continues to receive laser and acupuncture as needed when he begins to demonstrate symptoms of increased spinal/hip pain or urinates outside the litterbox. 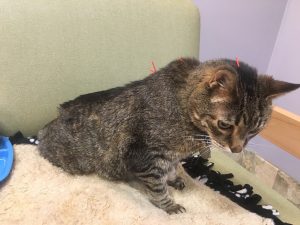 Medical Decision Making
Given significant pain on examination, initial objective to decrease pain and address chronic spinal pain, wind-up pain, particularly in lumbosacral region. Points were selected to target spinal and hip pain, as well as muscle tightness/pain secondary to abnormal gait and compensation eg latissimus/neck pain. Suspect that inappropriate urination is related to inability to climb into box rather than cystitis. Recommended urinalysis but declined at this time. Additionally, include some parasympathetic stimulation to aid in digestion and decrease overall sympathetic tone. Additionally, use therapeutic laser over directly painful region of sacral spine as Bugs is too reactive to place acupuncture needles at this location. Recommend twice weekly sessions for four-six sessions, then decrease in frequency pending response to therapy. As laser is used in sacral region, may consider utilizing acupuncture if pain is relieved sufficiently.

Acupuncture Treatment
Initial treatment on 7/15/16 focused on pain relief, and some parasympathetic modulation. Began with GV-20 for calming and assessment of reactivity to needle placement. Some tension in paraspinal musculature at level of C-5-T-3 noted, as well as local tension throughout latissimus dorsi musculature and some taught bands on lateral neck. Elect not to needle trigger points directly in initial session. GV-14 and BL-10×2 were used for neck/C-5- T-3 pain. For parasympathetic modulation, ST-36×2 was used. BL-27×2 was used both for local pain and concern for cystitis. GB-30×2 was used for hip pain (decreased hip extension). Spinal laser was used with Companion class IV laser, lumbar/sacral region for two sessions, 7W, CW, three minutes each. Recommended twice weekly for four sessions then decreasing frequency depending on response. Due to constraints, was able to provide three sessions on 7/15/16, 7/21/16 and 8/18/16.

Outcomes, Discussion, References
Between treatments, there was a significant decrease in episodes of inappropriate urination and Bugs was observed to get into and out of the litterbox with more ease than prior to treatments. Following the second treatment, Mr. Snuggle Bugs did not have any episodes of urinating near the litter box for four weeks. He did have a recurrence of inappropriate urination at four weeks and received another treatment, and has not had inappropriate urination since. Bugs appears to be ambulating more comfortably at home and is having no issues getting into the litter box. Bugs tolerated the acupuncture and laser sessions very well. Additionally, he did not have any significant episodes of constipation during the 8 weeks that he was monitored, which had occurred every few weeks previously. The combination of acupuncture and laser likely played a significant role in decreasing his pain and increasing mobility. No other treatment protocols were initiated during that time although it was recommended to increase the surface area of gabapentin applied transdermally due to concerns for inadequate dosing. A 2009 review article on the use of low-level laser therapy (LLLT) found that it both reduces neck/spinal pain immediately after the first treatment but also continues to show improved pain management for up to 22 weeks after completion of a treatment protocol (Chow et al, 2009). While Bugs did not fully complete the recommended course of laser and acupuncture, his symptoms are well controlled after only three sessions which is in line with these findings.

There was one possible adverse effect following his third treatment where Bugs vomited the day after treatment. Due to his numerous comorbities it was difficult to determine the cause of vomiting as extensive work up and lab work was not feasible for his owner. Upon recommendation to check his blood glucose at home, it was found that Bugs was having episodes of hypoglycemia at his standard dose of six units of prozinc twice daily. It is most likely that the episode of vomiting was secondary to hypoglycemia and no further episodes were noted after decreasing insulin. There is some evidence, noted in a review of 234 separate studies on the effects of acupuncture in diabetes mellitus, that acupuncture can be used to decrease insulin resistance, hyperglycemia, and obesity (Liang, Koya 2010). Some of the points utilized for diabetes include ST-36 and GV-20, which Mr. Snuggle Bugs received at each treatment. Since starting acupuncture, his daily insulin dose needed to maintain normoglycemia has decreased from six units twice daily to three units twice daily. While there are multiple reasons why this could occur, including weight loss, it is interesting that the timing of decreased insulin need aligned with his acupuncture treatments and very possible that acupuncture played a role in decreasing his insulin resistance.

Follow up call on 10/20/16 indicated that Bugs has not had any urinary issues and is doing well at home, and currently maintained on three units of insulin twice daily (was at six unites twice daily prior to treatment).