Osteoarthritis and Chronic Kidney Disease in a 12 Year Old Poodle 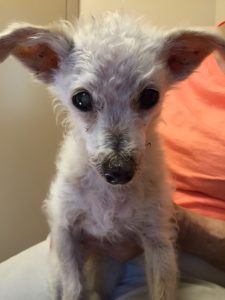 Senior pets are a common occurrence in most veterinary practices.  These patients are often painful and have multiple, concurrent disease processes.  Mousee, a 12- year-old poodle, is one such patient.  Mousee has chronic kidney disease, cataracts, and osteoarthritis, all resulting in poor quality of life and weight loss.  Because of concerns about kidney disease, acupuncture and cold laser therapies were chosen over traditional NSAIDs and other medications.  After several treatments with both acupuncture and cold-laser therapy, Mousee’s weight has stabilized and her comfort level has improved.

Mousee has been a patient since December 2013.  No history is available prior to June 2013, as she was a rescue.  In June 2013, she presented to a rescue, which performed her ovariohysterectomy, dental, and started her general medical care.  In December 2013, during her first examination at our clinic, Mousee still had underlying dental disease with oronasal fistulas.  Also, during her exam it was noted that Mousee had limited range of motion and crepitus in both stifles.  In June 2014, while performing some general blood work, mild azotemia was detected (BUN-55, Crea-1.2).  Persistent azotemia was confirmed later in June during a recheck of kidney values (BUN-44, Crea-1.6).  Specific gravity remained normal, and weight was consistent around 8 lbs.  A kidney diet and Vetri-Science Renal Chews were started at this point.  Kidney values remained stable, and in September 2014, a dental was performed due to worsening dental disease and to repair the oronasal fistulas.  In late October 2014, the left oronasal fistula recurred, and in December a second surgery was performed to repair it.  Mousee’s kidney disease remained stable on subsequent check-ups, and other than the development of cataracts, Mousee’s health was very good.  In October 2015, she had a benign mammary mass removed.  In April 2016, Mousse started a general decline in appetite, activity, and weight.

April 3, 2016- Cataracts in both eyes.  Pain response during myofascial palpation behind shoulders at T5 and over both hips.  Mousee’s weight had dropped to 6.98 lbs. and the owner reported poor appetite.

Discussed with owner options to address the following areas of concern:

Physical medicine verses other more traditional medical options (NSAIDs) were discussed with owner.  Due to elevation in BUN and SDMA, acupuncture and cold laser therapy were chosen.

Using cold laser therapy, other points were added into the treatment regimen.  Laser parameters used were 2 W/4 seconds (8 J).  Points used with this treatment modality include SP-6, ST-36, ST-34, BL-52, GB-29, LU-7, LU-9, GV-12, ST-25, LI-11, HT-8, BL-60, KI-3 and multiple trigger points found upon myofascial palpation.  ST-36, GV-12, and ST-25 were chosen in particular for help with appetite.  Other points were selected based upon palpation before each acupuncture session.  (Mousee had a couple incidents of falling off the bed during this time because of gradual loss of vision due to cataract development.)

Mousee gained and then maintained weight.

During Mousee’s treatment, no other treatment modalities other than acupuncture and cold laser therapy were instituted, and Mousee’s guardian made no major changes to her care.  Mousee’s guardian reported steady improvement in her appetite and general well-being after her treatment on 5/31/16.  As you can see from the chart above, Mousee’s weight has improved and has stabilized nicely for several weeks.

As stated before, Mousee did have a couple of falls off the bed that necessitated changes to her acupuncture and cold laser therapy protocols.  However, she recovered well and did not need any other medical intervention, like NSAIDs.

Mousee has taught me that even the smallest of patients can be quite complex.  It was important to me and to Mousee’s guardian that we see improvement in her quality of life, and that we did not worsen her problems, especially the kidney disease, by using traditional medications like NSAIDs.  Treating multiple issues with as few points as possible was important for Mousee, as she would not tolerate large numbers of needles to be placed in a single session.  However, with Mousee’s guardian’s help, and using cold laser therapy/ laser-puncture, I feel we were able to create a protocol that works for everyone.