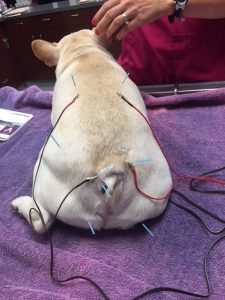 While previous research has shown the efficacy of electroacupuncture in treatment of thoracolumbar IVDD, this case study follows a 12-year old neutered male French Bulldog with pelvic limb tremors and weakness due to a suspected lumbosacral lesion. He demonstrated complete resolution of tremors for six hours following only one treatment with electroacupuncture. Three sessions over a 10-day period revealed a decrease in tremor frequency and severity as well as evidence of increased strength in the pelvic limbs.

Dante, for the past eight months, has exhibited bilateral pelvic limb tremors when standing in place. The tremors are absent when Dante is recumbent. While not overtly painful, the owner suspects pelvic limb weakness as Dante no longer lifts a leg to urinate.  The owner obtained Dante from a breeder at eight-weeks of age.  He has a history of epilepsy, controlled for many years with potassium bromide.  He also receives Ursodiol for gallbladder sludge.  In August 2015, he had a splenectomy and histopathology confirmed a splenic myelolipoma.  The pelvic limb tremors were appreciated following Dante’s splenectomy and according to the owner, Dante had lumbosacral pain appreciated upon rectal exam in late-2015.

Upon physical examination, Dante was bright and alert with mild nuclear sclerosis and a body condition score of 6/9.  When standing in a stationary position, severe muscle tremors were appreciated along the length of bilateral pelvic limbs and the caudal dorsum.  His exam was otherwise unremarkable with no discomfort upon cervical flexion, spinal palpation, nor lumbosacral palpation during rectal exam.  No proprioceptive deficits could be appreciated.  Myofascial exam was difficult during the tremors, but while recumbent Dante’s pelvic limb musculature was generally relaxed, with the exception of the gluteals, which were very mildly tense bilaterally.

Though there were no proprioceptive deficits nor spinal pain to localize the lesion, Dante’s tremors were localized to the pelvic limbs and caudal dorsum.  Though no specific diagnosis was established at this time, the signs are most suspected to be due to neurologic or neuromuscular disease.  A lumbosacral spinal lesion would be consistent with the bilateral pelvic limb tremors, with more specific differentials including intervertebral disk herniation or neoplasia.  The plan was to target the lumbosacral region and sciatic nerve with acupuncture therapy.

First, a 20-gauge needle was placed at GV-20, GV-14, and Bai Hui to help relax Dante, a first-time acupuncture recipient.  Bai Hui is also recommended for pelvic limb nerve dysfunction while GV-14 and GV-20 could potentially neuromodulate Dante’s epilepsy.  Electroacupuncture was performed between BL-25 and BL-35, bilaterally, to target the lumbosacral spinal nerves.  Additional dry needling was preformed bilaterally at BL-36 and BL-54 to neuromodulate the sciatic nerves.

Dante demonstrated a dramatic clinical response to his first acupuncture treatment.  Immediately following treatment, Dante was placed on the floor and stood, with no visible tremors.  Dante’s owner was shocked, noting that it had been many months since she had seen him stand without tremors.  Dante’s rapid results are consistent with previous observations that electroacupuncture provides more rapid results than dry needling alone (Gulanber).   Dante’s tremors gradually returned but were subjectively less dramatic for the following weeks.  Dante had three acupuncture sessions over 10 days, and the owner noted signs of improvement as he lifted his leg to urinate again and stood up on his back legs to look out the car window for the first time in months.  While the tremors continued intermittently, they were ameliorated and Dante demonstrated greater strength in his pelvic limbs.  There were no changes to Dante’s treatment plan during this time, aside from the addition of acupuncture.  Dante’s owner is interested in seeing how long Dante’s improvement will be maintained without further acupuncture therapy.   One study has shown that improvement could potentially last for 6 months (Fry, Neary and Sharrock).

This case shows one dog’s immediate and on-going response to acupuncture treatment for a lumbosacral lesion. This is consistent with studies demonstrating the efficacy of acupuncture in treatment of spinal lesions in dogs.  One study showed that when acupuncture was combined with Western therapy, dogs with thoracolumbar IVDD showed more rapid recoveries than dogs receiving Western therapy alone (Hayashi, Matera and Brandao de Campos Fonseca Ointo).  This case differs in that it addresses the more caudal spine and the patient demonstrated noteworthy improvement in the absence of additional treatment modalities.  Dante’s case is an encouraging example of the potential efficacy of electroacupuncture alone in treating lumbosacral pain.   This may be particularly encouraging with regard to canine patients who are not candidates for NSAID or steroid therapy.