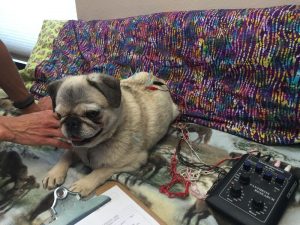 This case report discusses the use of electroacupuncture and other physical medicine modalities to treat acute spinal cord injury (ASCI) in a Pug named, Bizzy. Bizzy presented to the clinic on 7/24/16 for acute paresis of both hindlimbs, moderate back pain around thoracic-lumbar junction, and inability to urinate. Cold laser and acupuncture therapies were initiated immediately; electroacupuncture was started on 7/27/16 and performed every four-five days for a total of four treatments. Additional medical management of included oral steroids, buprenorphine, methocarbamol for spinal cord injury; bethanechol and prazosin for urinary retention. Within 24 hours of receiving electroacupuncture Bizzy’s clinical signs were significantly improved, urinating normally and less ataxia in hind limbs. Bizzy’s positive and measurable response to electroacupuncture therapy provides further evidence that dogs with acute spinal cord injuries can have improved neurologic recovery when electroacupuncture and other physical medicine modalities are incorporated into their medical treatment plans.

Bizzy is a nine-year-old spayed female. Her owner called the emergency after-hours line on 7/24/16 concerned about Bizzy’s inability to control her hindlimbs and not being able to urinate or defecate for the past 24 hours. Prior to the development of these clinical signs, Bizzy was examined on 6/10/16 for being stiff in the hind end and having a mild right hindlimb lameness. No ataxia was noted at that time, but mild conscious proprioception (CP) deficits were noted in both hindlimbs. Bizzy was prescribed Rimadyl 12.5mg twice daily, Dasuquin and EFA samples and restricted activity for two weeks. Acupuncture was recommended but the owner elected to see if Bizzy’s condition improved with Rimadyl and supplements before deciding if acupuncture was necessary. On 7/24/16, the owner reported Bizzy had been progressively loosing the ability to control her hind limbs over the past 48hrs, no recent trauma or injuries had occurred according to the owner. Bizzy was still eating well, drinking less than normal, and decreased activity level due to extreme difficulty walking.

Based on the information gathered from physical exam and history, Bizzy’s primary differential diagnosis is type 1 intervertebral disc disease (IVDD). Other differential diagnoses include vascular event, granulomatous meningoencephalitis, neoplasia, discospondylitis, or trauma (ie vertebral fracture). Cold laser therapy in combination with acupuncture treatments have been shown to provide positive results in acute spinal cord injuries therefore both of these modalities were used on Bizzy. The laser device utilized was a Class IV Mphi laser made by Cutting Edge Laser Technologies. When treating Bizzy’s back injury (mid thoracic to mid lumbar spine) the following settings were used: wavelength 905nm, power 0.5W and total joules 75.172. To help increase blood flow/decrease inflammation in hind limbs laser was applied to each hip, tracing right sciatic nerve and each adductor muscle using the following setting: wavelength 905nm, power 0.5W and total joules 50.129. Laser therapy was not used on distal left hindlimb due to recent MCT removal on the left lateral thigh.  When designing the acupuncture treatment plan the goal was to reduce local pain in the lower back, improve neurologic function in the hindlimbs and stimulate parasympathetic nerves that control bladder voiding.  To maximize benefits from acupuncture and hasten the return of vital neurologic function treatments were performed every four-five days for a total of four sessions. Needles used for Bizzy’s first session were red Seirin 0.16x 30mm, for subsequent sessions blue Seirin 0.2 x 30mm and Hwato 0.2 x 25mm needles were used. Due to Bizzy’s extreme sensitivity to needling during her first treatment, electroacupuncture was not used until the second treatment session.  Homeostatic points GV-14, GV-20 and Bai Hui were used for calming effects and relieve neck and back pain.  To treat local back pain near the site of the suspected IVD lesion BL points 18-22 were placed on both sides of the spine. For treatment of pelvic limb paresis and urinary retention needles were placed at BL-40 and KI-3 on each limb. Additional points used were ST-36 and BL-60 to improve pelvic limb dysfunction and balance parasympathetic system; Bafeng points were also used on both hind paws for treatment of neuropraxia. Electroacupuncture treatments were performed using the Pantheon electro-stimulator 4c.Pro unit and consisted of using a mixed frequency setting that alternated from 2 Hz to100 Hz. One set of leads were placed on Bai Hui and the middle Bafeng, the second set of leads were placed on BL-18 and BL-22; treatment time with the electro-stimulation was 15 minutes.

Bizzy’s IVDD grade was initially 4, after two weeks of receiving acupuncture treatments her IVDD had dropped to a grade 2. The first significant signs of improvement were seen the day after Bizzy’s first electroacupuncture session; Bizzy began to gain mobility and control of her hind limbs, no longer needed a sling to help her walk and was urinating comfortably on her own. Although Bizzy was on Bethanechol and Prazosin to treat urinary retention until 7/29/16 which could have contributed to the return of urinary voiding, once taken off these medications Bizzy was able to maintain appropriate urination with acupuncture treatments alone. All pain medications were discontinued by the owner on 7/29/16 and Bizzy was weaned off of her steroids over the next week. By 8/5/16 when Bizzy received her fourth acupuncture session she was able to maintain a coordinated gait with her hind limbs, transition from sit to stand with ease and turn/pivot without falling over. Bizzy’s CP went from absent in the hind limbs to mild deficits in which it took two-three seconds for her to self correct abnormal placements.  While there has been very little evidence indicating whether steroids provide any benefits for treating ASCI numerous studies have been conducted providing evidence that acupuncture can significantly improve neurologic recovery from ASCI. In a study performed by Wong et al. subjects who received electroacupuncture had statistically and clinically significant improvements in their neurologic outcomes at the one-year mark, compared to those who received standard rehabilitation care (1). Electroacupuncture in particular has been studied extensively in order to determine what mechanism of action it provides on a cellular level that improves recovery of spinal cord injuries. One study demonstrated that electroacupuncture increases AChE activity, up-regulates glial cell line-derived neutrtrophic factor mRNA expression, and promotes the recovery of motor neuron function in the anterior horn after spinal cord injury (2). Utilizing acupuncture to treat Bizzy’s injury was critical for reducing further damage to the spinal cord and maximizing the amount neurologic function she was able to recover. Bizzy’s immediate response to electroacupuncture treatments provides further support that electroacupuncture is a necessary component of the treatment plan for achieving optimal outcomes in medically managed IVDD cases.