Ataxia and EPM in a 6 year Old Quarter Horse 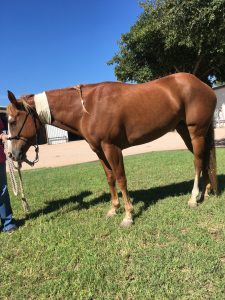 Abstract
Daisy is a six-year-old quarter horse mare who presented for progressively worsening ataxia and three-day duration of hyporexia. Daisy was diagnosed with EPM, confirmed with a very high titer to the protozoa Neospora that is implicated as the cause of the disease in western Texas and New Mexico. Treatment for this disease is still in progress but in hospital treatment, which included acupuncture, improved her level of ataxia, and her appetite significantly.

History Presentation
On 9/16/2016: For the last three days, the caretaker at Daisy’s barn reports that she had not been eating well. Earlier today, Daisy went down in her stall and required assistance to rise again. The caretakers of this mare had noted some ataxia in the last few days, but report that she is significantly worse today than she was yesterday. The owner, who was only reachable over the phone, consented to taking Daisy to the clinic for treatment. Daisy had not received any vaccines in the last year at least. A trainer who was breaking Daisy around three months ago reports that during her training, Daisy went down with her rider once, but recovered easily and never showed signs of incoordination that concerned the trainer afterwards. Daisy has not been ridden in around one month. An employee of the stable where Daisy is kept provided a video of Daisy falling dramatically, head first, when loose in a pen and stimulated moderately to move away from the videographer. The same employee describes Daisy standing most of the day in her pen with her head in the corner. It was unclear whether this was a description accurate of head pressing or just depression.

Physical Exam and Clinical Assessments
On presentation (9/16/2016), Daisy was standing and able to walk but very ataxic. Her temperature was 101.7 F. No cranial nerve deficits were noted – and she was able to eat and swallow normally. Further neurologic exam included neck stretches, small circles, walking over a change in surface texture, over railroad ties, and a tail pull. Backing and elevated head exercises were not performed due to the level of ataxia this patient suffered from. She was very weak on a tail pull and her ataxia was graded as follows: Hind limb – Grade 3/5, Forelimb, Grade 1/5. The forelimb ataxia was difficult to evaluate because this mare had severely long toes and her hoof condition may have contributed to her stumbling to some degree, however I do believe the forelimb ataxia was real. She was reluctant to flex her neck and was reactive to palpation of BL-10. SI/LS flexion was considered within normal limits. This patient fell when asked to walk into the stocks for catheter placement, but was able to get up with some assistance. No head pressing was noted when she was loose in her stall. A complete blood count was run in hospital and all values were normal.

Myeloencephalitis. Developmental or traumatic disease could not be ruled out at this time, but was considered less likely due to the fever, hyporexia, and depression.

This first treatment was performed in the stall to avoid having to move this ataxic patient. My goal was to dry needle only to determine her acceptance of the treatment. She was more reactive to palpation of her neck, so I targeted the caudal half of her spinal cord more for this treatment.

She was very reactive to placement of BL-54, so that needle was pulled and needle placement was stopped. Dry needling for 15 minutes only for this session.

This treatment was also done in the stall. She was very depressed today and tolerated this treatment well. Today I was more aggressive with needle placement and placed a few needles in her cervical region. She obviously didn’t like them but I think because of her level of depression tolerated them without much of a fight. E-stim was used down her back only. I added Da Feng Men, PC-6, and ST-36 because of her level of depression.

She was brighter today and in order to evaluate her level of ataxia and gauge any improvement or decline we removed her from the stall for the treatment. She tolerated this treatment very well and allowed E-stim not only of her back but also of her neck. During the treatment, she would relax and fall asleep.

Outcomes, Discussions, References
Daisy’s ataxia improved over the weekend. She always relaxed and seemed to even enjoy her acupuncture treatments. Her appetite was poor for the first three days but it improved significantly her third night in the hospital. She was not drinking well during the first three days so maintenance fluid therapy was instituted as needed. Her temperature was taken daily and her fever resolved within 24 hours of presentation. She remained afebrile for the duration of her stay in the hospital. On day 3, because her appetite still had not improved much, omeprazole paste therapy was instituted early in the day. After three days of intense therapy, the owner’s budget for treatment was reached and minimal therapy was continued until test results were received and she could return back to her stable. UC Davis Veterinary lab reported a Neospora Titer of >/= 2560, confirming a diagnosis of EPM. Test results for WNV, EEE/WEE, and EHV-1 all were negative.

Marquis paste therapy was then instituted. Vitamin E powder was continued at the same dose. Her appetite continued to improve and omperazole therapy was discontinued. She spent a total of 10 nights in the hospital. The owner was encouraged to schedule follow up Acupuncture treatments but none have been scheduled as of 10/5/2016.

I believe that the acupuncture treatments were well received by this patient and that they had a significant benefit for this case. In my experience with neurologic horses, especially horses with symptoms this severe, the case usually ends in euthanasia either because of owner budget issues, owner unwillingness to accept the prognosis for return to function, or lack of response to treatment by the patient. This mare was significantly depressed and lethargic for the first three days of her stay in the hospital. After her third and most intense acupuncture treatment, she began to eat well again, and improved in her appetite and attitude daily afterwards.

My first reference is a study that specifically reports on IVDD in dogs, but I believe the positive affects of acupuncture to be similar in my case. The inflammation in the spinal cord caused by the protozoa, in this case Neospora, causes the symptoms of EPM. If the secondary inflammation can be controlled, I believe the horse’s ataxia will resolve faster and also give the horse a better chance of recovering enough to return to work, if it has a job. This is the biggest risk associated with the expensive treatment of this disease for many of my clients – that they may spend thousands of dollars on their horse and the treatment is either not effective or that the horse has lifelong ataxia from permanent damage to the spinal cord, and is unsafe to ride. My second reference is a paper giving evidence that EPM cannot be diagnosed using the patients’ sensitivity or reaction to acupuncture point GB-32, which is something that I did not attempt to do before sending blood samples to UC Davis for testing. The third reference gives evidence for the benefit of acupuncture in neuromuscular disease in horses, specifically chronic back pain. I feel that I have seen this benefit in action with many of the other horses I have treated with acupuncture so far, and it could apply to this case because of the long-term ataxia this horse will have. If she is unsteady, she will certainly be compensating in some way in order to balance herself and walk. In order for her to recover completely, acupuncture could help treat muscle soreness and trigger points that are a result of her long-term compensation.