Barrel racing mare presented for behavioral problems while running the pattern. Behavioral issues included running away with the rider and refusing to turn the first barrel (right turn). The patient was sound and healthy despite displaying these behaviors. The patient was treated with chiropractic adjustments, acupuncture treatments, and dental floatation. Following treatment, the behavioral issues stopped and the mare began to perform more consistently and her barrel times improved.

The patient was an eight-year-old Quarter Horse mare that present for chiropractic adjustment, acupuncture treatment, and dental floatation. The patient is used for barrel racing but has recently been having behavioral problems while running the pattern including running away with the rider at the end of the pattern and refusing to turn the first barrel. This behavior had been intermittently occurring for the last few months but it was becoming more frequent in the last month. The patient had been previously worked up for a lameness two years ago and hock injections were performed. Since then the patient has been sound. The patient is up to date on vaccinations and had a dental float performed last year.

On physical examination the patient’s vitals and cardiopulmonary auscultation was within normal limits. The patient was sound when trotting over a smooth, hard surface. Myofascial exam showed moderate muscle spasms and trigger points and sensitive to palpation in the lumbar spine and sacroiliac area. Range of motion was restricted in the poll, third cervical vertebrae, first and fourth lumbar vertebrae, and in both sacroiliac joints. Oral examination showed moderate sharp points on the lower arcade lingual surface and moderate sharp points on the upper arcade buccal surface. 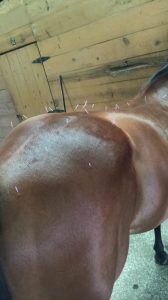 Acupuncture points were decided to treat the lumbar pain and the nerves supplying the hind end. Additional points were used to assess the patient’s tolerance to the needles and the possible forelimb compensatory pain. Chiropractic adjustment to restore motion to the areas of restriction and perform a dental float. 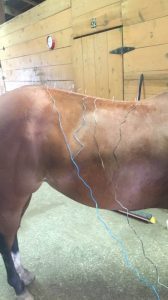 The following points were selected ST-36, SI-9, GB-21, BL-12, BL-21, BL 23-30, and Bai Hui. Stomach 36 was used for its pelvic limb and anti-inflammatory/immune-modulatory effects. Small Intestine 9 was used to both assess the patient’s acceptance to acupuncture needles and to treat any possible compensatory thoracic limb pain. Bladder 12 and GB-21 were also chosen to assess the patient’s tolerance to the needles. Bladder 21 and 23-30 were chosen as this was the area muscle trigger points and sensitive to palpation. Bai Hui was used to assess needle tolerance in the hind limb as well as to treat back pain, lumbosacral pain, and pelvic limb pain. Treatment was to include dry needles as well as electroacupuncture and to see how the patient responded to decide future treatment intervals.

The patient did very well with the acupuncture treatment. The mare became very relaxed during the treatment. Three days following treatment the patient had a barrel racing event. During this run there was no adverse behavior. The patient performed well for the next six weeks and was rechecked. There was less muscle trigger points and sensitivity to palpation. Another acupuncture treatment and chiropractic adjustment was performed. The patient continued to perform well following the second treatment. Performance became more consistent and the behavioral issues stopped. Performance not only became more consistent but performance also improved, the patient began clocking faster times.

The improvement seen may not all have been from acupuncture. The other treatments performed also played a part in the response seen. The patient did appear to relax thoroughly from the acupuncture treatments. No adverse effects were seen.

In the 2005 article by Xie et al, the authors showed an improvement in horses with chronic thoracolumbar pain.1 This case is slightly different than those patients as this patient also received a chiropractic adjustment for the lumbar pain. Dunkel showed that acupuncture can decrease lameness and change the gait.2 While this patient did not appear lame, it is possible the acupuncture may have treated a subclinical lameness, potentially associated with the back.