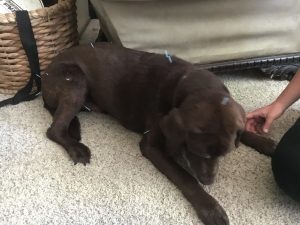 Taj is an 11-year-old MC chocolate Labrador Retriever who has suffered from chronic osteoarthritis.  He was confirmed to have some degree of osteoarthritis in all joints, but most severe in his hips. He was admitted to an osteoarthritis trial at the University of California, Davis, but saw no changes during the trial, which led the owner to suspect he was in the placebo group.

Taj received three acupuncture treatments over three weeks. The owner’s primary complaints were how slow he has been moving and that he won’t jump onto the bed anymore. Taj’s owner did not see any dramatic improvement over the three weeks, but no decline in his activity level and he did jump onto the bed once.

Taj has food allergies that manifest predominantly as otitis externa AU and skin disease. He is currently on the Purina Dermatological Diet and seems relatively well managed.

The owner has seen most of Taj’s clinical signs associated with his right pelvic limb and he favors laying on his left side. More recently, he is slower on walks and will not jump in the car or on the bed.
Taj broke his right thoracic limb as a puppy and it healed without complications. Taj has occasional seizures for the past few years, it is usually a single episode about 6 months apart.  He has never received acupuncture treatment before.  Taj lives with the owners two elementary school aged twins and a cat.

There is muscle wasting in both quadriceps regions, but more pronounced in the right quads, the triceps are tender to palpation bilaterally, and the hips painful on extension bilaterally. During his myofascial examination, Taj was reactive to his capi, stifles, and hips bilaterally.  BCS 4/9

Discussed evaluating the level EPA+DHA in the omega 3 to be in the 50-100 mg/kg EPA and DHA. Also mentioned that rimadyl would be complimentary to our treatments and since Taj just had baseline bloodwork for the osteoarthritis clinical trial, the owner could consider starting him on a low dose of long-term carprofen.

The acupuncture treatment plan was aimed to target hips, knees, sacroiliac, and lumbar region to improve blood flow and neurostimulation to the joints affected by osteoarthritis, concentration on the right pelvic limb. Since this is Taj’s first experience with acupuncture, we also incorporated calming points and his special diet during the treatments. Taj had one seizure between the treatments on 4/24 and 5/1, so points target for epilepsy were prioritized (GV-14, GV-20, ST-36, LR-3).  We used very few points that were geared toward his elbows and thoracic limbs since patient was quick to explore the needles with his mouth during the first session (so we avoided points on the thoracic limbs in general). Again, since this was Taj’s first experience with acupuncture, we started with the 0.16 seirins and transitioned to 0.2 seirins. If we were to continue treatment, I would choose a few points to use uncoated needles to evaluate his tolerance.

All sessions lasted 15 minutes and any needles that had not fallen out before then were removed at 15 minutes.

While no obvious immediate improvement was noted by the owner regarding Taj’s activity level or willingness to jump on the bed, he became less reactive to palpation as well as the needling over the three weeks.  By the third session, he was incredibly accommodating to the needling process and tolerated all 0.2 seirins.  Taj did jump on the bed once and was apparently overall less painful on myofacial palpation the third week than his initial evaluation, but had no tangible measurable improvements. The challenge with Taj is he has so many affected joint regions, we could only concentrate on one side per session and were slowly working him up to more needles as well as a larger size.   Additionally, Taj did have a seizure in between sessions and the stress as well as imbalance of that event may have slowed our progress. The owner and I had discussed that at least a six-week session would be ideal to judge the efficacy of the acupuncture treatments, but our mutual schedules could only accommodate three weeks. I do feel that if we were able to continue treatments regularly long term, we would see improvement in Taj’s general well-being and overall mobility. I look forward to being able to provide more consistent, long-term treatments for my patients once I graduate and am out in general practice!