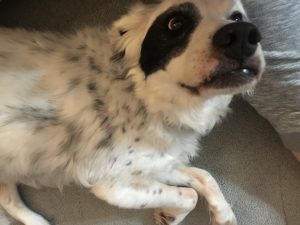 The patient presented for difficultly standing and general stiffness. The owners were exploring other options than traditional non-steroidal anti-inflammatory medication. Acupuncture treatments were preformed every two weeks for three treatments. The owners reported the patient seemed to improve, the patient’s activity increased. The patient was noted to be able to walk longer and was playing with the other dogs in the household more.

The patient was a 16-year-old mixed breed neutered male presented for increasing difficultly standing and the appearance of general stiffness. The patient was in good body condition and otherwise healthy. Over the past year owners reported a slow decline in activity. On the regular walks he started to slow down and trail behind the other dogs which was getting increasingly worse. He appeared to have trouble standing from either a sitting or lying down position.

The patient was up to date on vaccinations and has never been obviously lame. He is not receiving any medication other than monthly flea and tick and heartworm preventative. The owners have not started the patient on any pain medication because they wanted to investigate alternatives to daily medication. The patient presented because despite no obvious lameness the owners would like to ensure a good quality of life. He has been healthy and never had any major medical problems.

The patient was bright, alert, and responsive on presentation. He was walking well; no obvious lameness or pain was identified. His heart rate, respiratory rate, and temperature were within normal limits. Cardiopulmonary auscultation was within normal limits. Palpation and range of motion of the thoracic and pelvic limbs were also within normal limits. Myofascial palpation revealed mild tension and trigger points in the triceps muscles (bilateral, right front worse than left front), moderate tension and trigger points in the epaxial muscles of the lumbar spine, semimembranous, semitendinous, and quadriceps. Abdominal palpation was also normal. No diagnostic imaging or blood work was performed.

Acupuncture points selected to focus on decreasing pain in the lumbar spine and hindlimbs and the compensatory forelimb trigger points in the triceps. Treatments were going to be performed once every two weeks for three treatments to start and then as needed depending on response to the treatments.
Acupuncture Treatment

Acupuncture points selected to treat the trigger points in the compensatory forelimb included SI-9, SI-11, SI-12, and BL 11-15. Small intestine 9 was chosen as it was in closed vicinity to the trigger points within the triceps muscles and its innervation is the radial nerve. Small intestine 11 and 12 were chosen because they are good for myofascial dysfunction of the forelimb. Bladder 11-15 were chosen to treat the nerve roots to the forelimbs. 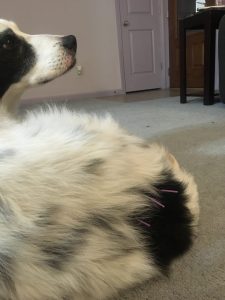 The patient did well during the acupuncture treatments. Improvement was noted over the six weeks. The patient continued on his walks and was able to keep up with the group but also increase the length of the walk from 20 minutes to 60 minutes. His ability to stand did not appear significantly different but he was thought to play with the other dogs more. His overall activity appeared to have improved with treatment. No other treatments were performed during this time. No adverse events were noted.

In the 2006 Innes paper that reviewed literature on the long term NSAID treatment, six of seven papers reviewed indicated a benefit of long-term treatment over short-term treatment in the reduction of clinical signs or lameness; one study showed no benefit.1 This paper does show that NSAIDs can be used long-term but the owners in this case did not want to use NSAID, especially long term. Side effects of long term NSAID included increase clotting times, gastric ulcers, and liver failure.2 This was one reason the owners were reluctant to start on NSAID therapy. This case shows the need to provide owners with different options other than traditional medicine. The patient did improve with acupuncture alone and the owners were very satisfied with the outcome and the patient did not need to start on daily medication.
References