Dry needling acupuncture was used on a weekly basis for total of six sessions to address chronic left thoracic limb lameness originating from elbow osteoarthritis in a 14-year-old domestic shorthair.  Laser therapy was used on the last two sessions. Physical therapy modality appeared to have faster and stronger effect than dry needling alone to alleviate the lameness of the patient.  Many positive changes were seen in the patient but they were mainly subjective changes – randomized and controlled studies need to be done for objective evaluation of whether relying solely on acupuncture will be effective enough to treat elbow osteoarthritis.

On August 14, 2016, the first acupuncture session was performed on Piaf for chronic forelimb lameness – especially left thoracic limb lameness.  She was diagnosed with left elbow and carpal osteoarthritis radiographically in 2013 when her lameness was first apparent.  Due to the fact that she was adopted in 2011 with minimal previous history, her exact age and medical history is unavailable, making any history of traumas or surgical history, other than being spayed, that may have occurred prior to adoption as unknown factors.  On abdominal radiographs performed in 2013, lumbosacral spondylosis was incidentally found.  Her pain has been managed with buprenorphine (recently dose increased from 0.06mg BID-TID to 0.135mg BID-TID), and is on Dasuquin and Cosequin simultaneously, but there has been no use of NSAID yet.   The patient was recently (couple months ago) started on Amantadine 10mg once daily as well.  No physical therapy had been performed before the first acupuncture session.  Owner provides the patient a heated bed, and is currently working on building a ramp for the patient to walk up to the bed.  Per owner, she has good days and bad days with her lameness – bad days she will go up the flight of stairs to second floor one step at a time and has pronounced lameness.  Good days she has minimal to only mild lameness of her left thoracic limb.  She had dental extractions done in 2012 and she is overdue for another dental procedure; owner also mentioned that she has chronic irritation of her ears and does not like her ears being touched.

All acupuncture treatments were done at owner’s house.  Prior to each treatment, myofascial exam was performed.  The pulse quality was always fair – synchronous and symmetrical.  On the initial session, the patient had quivering thoracic limbs – bilaterally but right worse than left.  The patient was also face shy, mainly due to the chronically irritated ears.  Throughout the multiple acupuncture sessions, she had this persistent facial sensitivity (mainly the left mandibular area) and full oral exam therefore was never performed.  She also had tight cervical muscles, muscle atrophy of gluteals and epaxials, hamstrings, and tight triceps muscles.  Usually there was at least one location along the dorsum that warmth was appreciated, and usually very tight, sensitive, quivering iliopsoas muscles and latissimus dorsi.  She is ambulatory in all four limbs, but weight-bearing lameness in left thoracic limb (Lameness scale 3-4 out of 5) with mild carpal varus in left and slightly bowed elbows were noted especially on the first pre-acupuncture exam.  No cross extensor reflexes were appreciated in thoracic or pelvic limbs.  She always had normal withdrawal reflexes in all four, but limited elbow extensions (especially flexion) was noted.  Cutaneous trunci reflex was normal, but kyphosis was seen in the cranial lumbar spine for the first few acupuncture sessions.  Furthermore, small (<2cm) soft non-painful flat SQ masses were noted to be present on the medial elbows bilaterally albeit the left elbow mass seemed to be slightly larger than the right. 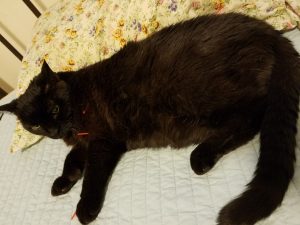 The main conditions that the author targeted to treat were the chronic left thoracic limb lameness, the spinal discomfort and myofascial abnormalities.  In order to achieve this goal, GV, BL and LI lines were mainly focused as treatment points.  The GV line was selected to reduce the tightness of the neck by neuromodulating the cervicothoracic nerves, and also to minimize agitation of the patient during the treatment by stimulating patient’s parasympathetic nervous system.  The BL line was chosen for its supply of spinal nerves and alleviate the kyphotic posture and the myofascial tightness of the thoracolumbar fascial layer.  Finally, the LI line was part of the treatment protocol because of its parasympathomimetic effects (via trigeminovagal reflex) and to treat the peripheral nervous system affecting the elbow joint. 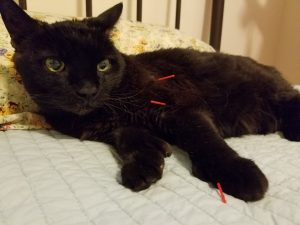 The acupuncture treatment sessions occurred on once weekly basis from Aug 14, 2016, until Sept 17, 2016.   All the acupuncture sessions were performed with dry needling for 15minutes, mainly using Seirin Red needles, but in areas where the patient kept shaking (head and paws), Korean DBC needles were used to prevent the needles from shaken out.  The consistently stimulated points were GV-14, GV-20, Bai Hui, LI-11 (left) and spinal bladder points (BL 11-25).  Although the patient was extremely cooperative, GV-20 was used to keep the patient calm.  GV-14 was used to release the tightness of the cervical spinal muscles and the neck and shoulder fascial layers, but also as additional relaxation point.  Bai Hui was stimulated for LS pain and for the muscle atrophy of gluteal muscles, tenderness of iliopsoas muscles.  LI-11 (left) was treated to improve range of motion of the joint by reducing the radial nerve entrapment.  The exact spinal bladder points depended on the locations of the patient’s trigger points along the spine, as well as where the kyphosis was most prominent.  Other points that were acupunctured at least once were: BL-10 to decrease the cervical tension, bilateral LI-4 for the jaw sensitivity and oral discomfort, GB-29 for hip discomfort and tight gluteal muscles, SI 12 and triceps as trigger points.  L PC-3 was stimulated couple times, trying to avoid the medial elbow mass.  After each dry needling session, the patient was massaged along the spine, lateral sides of the trunk, triceps area.  The patient received laser treatment (Class IV) on the last two sessions around both elbows, triceps, and iliopsoas muscle areas.  The laser unit used is owned by a veterinary clinic and was not easily accessible, making it unavailable at time of the first session. 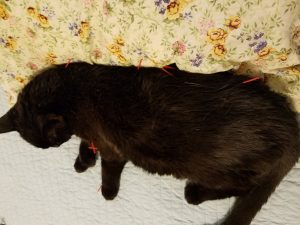 Subjectively, overall patient’s attitude improved through the six sessions of acupuncture: the patient naturally has sweet disposition, but towards the latter half of the sessions, she seemed to be seeking for attention and appeared to be anticipating the needling.  Lameness score also improved from 3-4 out of 5 to 0-1.  The left elbow range of motion was still restricted but improved (goniometry not performed), and with each acupuncture treatment the kyphotic posture did not resolve but recuperated.  The initially quivering iliopsoas muscles were not as sensitive by the fifth session.  Change in the patient’s gait was also noted – her elbows bowed less when the patient was in a low sitting position.  Many of these improvements were likely due to the releasing of the myofascial tension and nerve entrapments, however the laser therapy had a more prominent response than acupuncture or massage, especially in areas of sensitivity, i.e. triceps and iliopsoas muscles.

On the fifth session, patient reacted to acupuncture and massage in a way that was not seen in previous sessions – she tolerated the dry needling and massage as usual, but immediately before starting the laser therapy, the patient started vocalizing and became very restless – standing frequently and moving from one position to another, every time she was being touched.  The author’s suspicion is that even though there were no major changes in the acupuncture points or the length of time the needles were inserted, her sympathetic nervous system may have been overstimulated from the needling and perhaps the extended massaging.

This case study showed that acupuncture is indeed an effective treatment modality in alleviating chronic pain and lameness, although the laser therapy was more powerful tool to reduce the lameness more rapidly and dramatically.  The author intends to purchase an electrostimulator unit in future and implement it along the LI and BL channels whenever there is a “flare up” of the left forelimb lameness, in order to see if electroacupuncture would have similar dramatic efficacy as the laser therapy.  Based on the study by Kapatkin et al*, however, even electroacupuncture may not be a very promising modality in creating a huge enough impact in managing osteoarthritis.  This study used force plate analysis on dogs with elbow osteoarthritis and they did not see significant difference between before and after treatment with electroacupuncture.  However, subjectively, the owners of the dogs did see improvement.  As this study and this case report both show, more scientific-based evidences are needed to gain wider support of acupuncture as a routine osteoarthritic treatment modality.