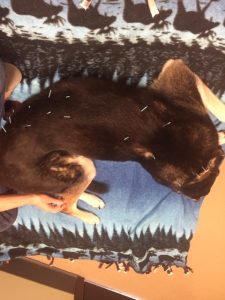 Caroline is a patient at our clinic who was initially treated with Carprofen, Gabapentin, and K-Laser Class IV therapy with minimal improvement reported by the client.  Acupuncture was offered as an adjunct with client satisfaction of outcome.

Caroline is a 13-year-old spayed female Doberman mix. She weighs 59#. She first came to our clinic in May 2016 as a second opinion when her owner was seeking options for osteoarthritic pain (confirmed via RDVM radiographs – hips and bridging spondylosis along T-S spine; stifles bilaterally unremarkable). Caroline was also on PROIN by her previous veterinarian for urinary incontinence. The veterinarian who saw her at her initial visit to our clinic prescribed Carprofen and Gabapentin. The owner noted some improvement but overall felt she was still having more bad days than good days.  Caroline’s owner likes to go hiking and swimming with her (i.e. active lifestyle). A Class IV laser was recently purchased by our clinic, and my colleague offered this additional management option to Caroline’s owner.

Six sessions were performed focusing on the hips and again Caroline’s owner saw some improvement, but seemed concerned with reluctance to jump in the car and difficulty getting up from a sternal position.

Following the class and considering the case, I reached out to the owner to offer acupuncture.

The goal of the treatment was to address the taut bands, muscle spasms, and trigger points, initially not considered during the treatment as well as the hips. Consideration was also given to the urinary incontinence possibly being neurological rather than estrogen responsive, however the patient was doing well on Proin. The execution of treatment was focusing on spinal segments, homeostatic points to modulate inflammation, and promote anesthesia and address the myofascial trigger points directly.

The points were selected to neuromodulate the appropriate spinal cord segments and were chosen based on associated nerves and trigger points. Bladder points 27, 28, 29 were chosen not only for spondylosis, but also in hopes of helping urinary incontinence.

The type of needle was changed from Seirin to HWA-TO during treatment #3 to see if improved outcome was noted by client.

Owner was warned patient may be a little more sore or sleepy the first day following acupuncture. During the second acupuncture visit owner history, she felt Caroline may have been feeling a little better the day after, rather than worse.  Also, although the client would report that Caroline was able to now jump in the car after the first visit of acupuncture treatment, she overall felt there was no improvement at that time. It was not until the fourth visit the client felt there was overall improvement. That Caroline had more spring in her step. At the fifth treatment, the client felt although better, no further improvement.

During the various visits attached, the myofascial palpation would change in her shoulder region and was address accordingly.

Although, clearly not a cure, there was improvement noted with acupuncture that was not seen with NSAIDS, Gabapentin alone, or with laser.

There were no adverse events noted. This owner is unwilling to trial pet off PROIN.

There are many approaches to helping pets with arthritic pain. It is important to assess the whole animal and not just focus on the hips if there is hip dysplasia as animals will overwork other areas to compensate.

Managing client expectations is also important. I often felt this owner felt she would have her ‘puppy’ back, which will never be the case. There were improvements I feel this client was unwilling to acknowledge (i.e. jumping into car rather than client picking up into).
This case was discussed at our following DVM meeting. The importance of myofascial palpation was stressed and appreciated by all.