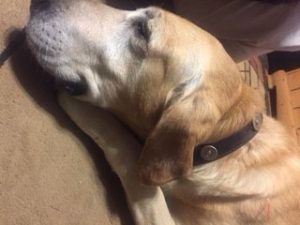 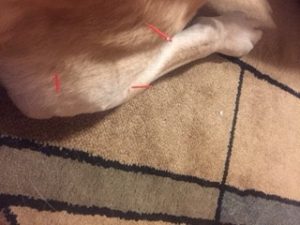 Abstract
Mac is an 8 year old male intact Labrador Retriever presenting for acupuncture treatment for age related changes and occasional lameness when in work.  Mac is a field/ hunting dog that is hunted over roughly 200 days a year for waterfowl hunting in Colorado and Nevada. He had been performing as his current work load since two years of age. The owners have noticed some occasional lameness on really challenging continuous work days and know in his advancing age there are some changes that need attention. Mac is starting back into training and the hope is acupuncture can keep him fluid and feeling a few years younger.
The two sessions we were able to get in seem to be a success for Mac and I hope to be able to see him again. He had the next day off after treatments and had normal lengths training sessions, roughly 1.5 hours. He was reported to seem looser and though not fully in shape was ready to go longer than previous sessions. The challenge for me and true evaluation of treatments that I want to know about is how he will handle the jumping in and out of pits. The elbows are hugely challenging, but the biggest component of Mac’s complaint.

History Presentation
Mac is an 8 year old male intact Labrador retriever presenting with a chief compliant of occasional lameness and overall soreness associated with high intensity training and working sessions geared towards hunting. Mac has been utilized as a field hunting dog for waterfowl hunting primarily in northern Colorado since he was a puppy. He is still highly active and keeps the same working schedule of 5- 6 days a week during season and 1-2 days a week in off season training sessions as younger (4-6 yr. old) dog. Mac hunts in a variety of situations, but in recent years he has hunted primarily out of in ground pits that are roughly four and half feet deep. With this pit design the dogs’ elbows take an increased weight load and concussive force when in getting into the pit. Roughly once a month this last season, Mac would come up lame in the front end at the end of the day.  This lameness has not been worked up and with his age and occupation he is suspected to have arthritic type changes and age related changes that could be inhibiting his range of motion and muscle/ load bearing. He will still be working this winter, but if his lameness/soreness continues to advance he will be pulled out of the active dog list. Mac really does live for his job and has a true drive and love of working.

Physical Exam and Clinical Assessments
Both sessions had very similar physical exam findings for Mac. Mac was bright, alert, responsive, and excited to be in his environment. He was not anxious, but very much like a young puppy just happy to be here and have people interacting with him. According to owner this has been him since he was a puppy not really acting his age. When watching Mac move I did not seen any obvious lameness and she seemed to move well and turn without issues. On palpation I was able to feel some very tight/ trigger point musculature areas more in the front end than hind. Specific to our treatment goals the first session I focused a lot on trigger points and the second session working more on joint areas. There was not real crepitus felt in his elbows or stifles. The range of motion seemed appropriate, but improved with some mild passive muscle stretching before I started the acupuncture part of the sessions. First session points that Mac reacted to include LU 5, LI 10, ST 34, SP 9, as well as very tight trigger points in these areas, especially the triceps muscles. In the second session they were similar points that also included; LI 11, SI 11, SI 12, TH 10 there were also trigger points, but subjectively they did not seem as bad.

Medical Decision Making
These sessions were Macs first time receiving any treatments besides vaccinations and an occasional ear infection. On myofascial exam all of the pieces fit well with his history, age, and job description. I know he has some specific concerns but over all his musculature and response was profound. There seemed to be such good responses to his trigger points that I really felt like he could benefit a lot just but trying to release these points.  Also because he did not show major boney palpation changes to his age and job I felt these were a good place to start and then add some more targeted points. Since I already had a second session scheduled, I kind of gambles my points, to focus on the musculature this first session then focus in and target the elbow concerns the second session. He also is such an excited, happy dog that I felt like trying to use a calming point to start may help get more out our treatments.

Acupuncture Treatment
For our first session we went with all dry needling techniques and some myofascial manipulation utilizing Seirin J-type needles (0.16×30) Reds. Mac did well both sessions. I used GV 20 both times and the second session it had a great effect coupled with the other points and he laid his head on the floor and seemed to be resting. GV 20- On the dorsal midline of the skull, in a notch at the rostral end of the external sagittal crest. Targeting the trigeminal nerve and cranial cervical spinal nerves. Used for agitation, dizziness, cerebrovascular accident. Both sessions I utilized LU 5 as he seemed to lay with his paws straight forward and I wanted to use an elbow point. LU 5 (L & R) – On the lateral aspect of the biceps brachii tendon at the level of the cubital crease. Located with elbow slightly flexed. Targeting radical and musculocutaneous nerves. This point is used for local elbow pain; distal bicipital tendon pain; epistaxis. Both sessions I spent time in the area of SI 11 and SI12 working on trigger points. The second session I must have been into the points better as almost all the needles had a kink or bend to them. SI 11 and SI 12 (L & R) – Trigger points in relation of infraspinatus and supraspinatus muscles. Targeting the suprascapular nerve. These points address myofascial dysfunction and trigger points related to shoulder function. I used TH 10 on the second session and was happy with my placement on the left but not the right. TH 10 (L & R) – 1 cun proximal to the olecranon at the tendinomuscular intersection of the long head of the triceps brachii muscle. Targeting the radial nerve. This point is used for elbow pain related to triceps restrictions. Triceps tendinopathy at the olecranon process or enthesiopathy. I tried in both sessions to use LI 10, but they did not stay in long and I am not sure I was in the right location. LI 10 (L & R) – 2 cun distal to LI-11, between the extensor carpi radials and common digital extensor muscle. Targeting the radial nerve. This point is used for lateral elbow pain; radial nerve injury. On the second session I wanted to try to some stifle points, but also try to start envisioning a plan for this whole body not just the problem areas to support his work and training. ST 34 (L) – 2 cun proximal to the patella in the vastus lateralis muscle. Targeting the femoral nerve. This point is used for stifle pain, instability, and/or dysfunction, femoral nerve injury. SP 9 (L & R) – Just distal to the medial tibial condyle. Targeting the saphenous and tibial nerves. This point is used for stifle pain, edema of the hind end, genital pain, and pelvic limb edema.

Outcomes, Discussions, and References
Mac was a good boy, quite a challenge with his outgoing active personality, but he did well with needles and eventually understood what we were asking of him and settled in. His second session definitely went a bit more smoothly for both myself and for Mac. I would not venture to say that Mac was calmer after our sessions, but his overall musculature and myofascial response seemed improved. I am not sure his owner was really convinced that anything was different at the time, but he did report a slight improvement in his overall performance.  I also remember from lab and lectures how challenging elbows will be so I hope that I am able to work with him when his is really working hard and maybe find something that works for him to keep him moving longer. As a lot of people say age is not a disease, but as happy as this dog is to go to work I hope to keep him comfortable and able to keep up in the field. I really would like to add e-stim to his trigger points, but when he relaxed so well the second session I decided to wait.
For my literature I changes my mind more than once and even found newer stuff published in between our sessions. In the Baltzer article it was good to put things into a perspective as sporting dogs are a growing industry of their own. I was surprised at the similarities of all the sport dogs.  The more games and agility type dogs do have a lot of similar injures as hunting and field test dogs. I think this is a huge help in research moving forward and how to keep these athletes happy and fulfilling their potential. This also gives me some more confidence to target specific anatomical areas that I know are important to these type of dogs work even if they are not necessarily reactive to it. My large animal and equine side got really excited reading the Canapp article. It is very neat to me that some of these very common practices for equine athletes may have a role to play and may become more common in sport dogs. To try to provide truly integrative care for sport dogs I think that the modalities and information are just getting started.  This article made me very excited to start working with more dog athletes and develop a relationship that could help provide total care to keep them going. I think acupuncture would make a great asset to help keep these dogs doing well.

Canapp Jr., Sherman O. et. al., “The Use of Adipose-Derived Progenitor Cells and Platelet-Rich Plasma Combination for the Treatment of Supraspinatus Tendinopathy in 55 Dogs: A Retrospective Study. Frontiers in Veterinary Science. 3 (2016) 61. Web.