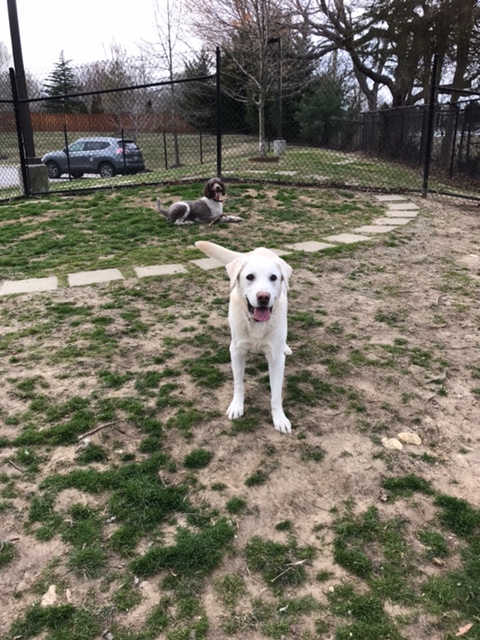 The purpose of this case was to evaluate the use of acupuncture to treat multiple conditions in an older canine patient, Mr. Chubbs.  Dry needling acupuncture was performed to address arthritis, lumbar pain, and mild fecal incontinence.  The main points used on Mr. Chubbs were GV20, GV14, Bai Hui, BL 27, ST36, LI11, and SI12.  At the end of 3 treatment sessions there was a decrease in fecal incontinence but no significant improvement in his overall stiffness reported by the owner.  Overall the treatment was tolerated and Mr. Chubbs should continue with regular acupuncture therapy in the future.

Mr. Chubbs is a 13 year old MC Labrador Retriever who presented with suspect arthritis and fecal incontinence.  For the past few years Mr. Chubbs has had difficulty going up and down the stairs and appearing stiff when hewould stand up after sitting for any period of time.  At the beginning he had a body condition score of 8/9.  Suspecting he was arthritic and the extra weight was nothelping, the owner started him on a reduced calorie diet.  Over a couple of months Mr. Chubbs lost weight rapidly and went down to a BCS 3/7.  Concerned over this drastic weight loss, the owner increased his food, but he did not consistently put weight back on and continued to have fluctuating weight loss.  He was ultimately put on a hypoallergenic diet and his weight stabilized.  Since then the owner had bloodwork and thoracic radiographs performed which were unremarkable.  Despite the weight loss, Mr. Chubbs continues to have mobility issues.  In the past year he has started dropping feces when outside on a walk.  Occasionally the owner has noticed an accident in the house.  It is unknown if he has postured for those accidents or if they occurred without him knowing.  He is currently on Rimadyl.   He has a history of a low-grade mast cell tumor (MCT) that was completely excised with clean margins.

Forelimb: thickening of elbow joints, reluctant to flexion of elbows and flexion and extension of shoulder bilaterally.  Tight bands appreciated on shoulder palpation and on antebrachium; Hindlimb: moderate muscle atrophy in HL, slight reluctance to extend hips, no pain, crepitus or buttress appreciated in stifles

Despite his issues, Mr. Chubbs is an active and slightly anxious dog, so I wanted to prioritize his problem list in the event I would not be able to address everything in a given acupuncture appointment.  To start, I wanted to place one or two calming points to relax him. The top issue for him was his elbow arthritis, the second was his lumbar discomfort.  The top issue for the owner was the recent dropping of feces.  For the forelimb, I ideally wanted to access the radial and ulnar nerves to address the elbow pain directly and the suprascapular nerve to address the tight bands palpated in the shoulder that were suspect to be a result of his altered gait.  To address both the lumbosacral discomfort and fecal incontinence I wanted to neuromodulate the spinal nerves (lumbar and sacral).  I also wanted to include a few distal points that would address immune regulation given the history of weight loss suspect to be caused by food insensitivity.

The definitive diagnosis is still tentative, particularly regarding the lumbar issues, but suspect a main issue is degenerative joint disease given the lack of evidence of neoplasia and negative 4Dx snap tests for tick borne diseases.  Also, there is no known history of trauma.  Diet sensitivity suspected given response to hypoallergenic diet trial.

After 3 treatments, the owner mentioned that she has not appreciated Mr. Chubbs dropping feces on walks like he previously had.  He is still stiff when he walks, and it is difficult to say if there was any notable improvement since starting the acupuncture treatment.  I think Mr. Chubbs would benefit from further acupuncture sessions on a weekly basis.  I also recommend that he be started on a joint supplement and fatty acids and continue with Rimadyl as previously prescribed.   I did not recommend laser therapy at this time given the history of MCT.

I was in general practice for almost 5 years prior to studying acupuncture.

Feelings about the case This case made me realize that you may have a “perfect” plan in mind, but that will have to be tailored for the patient.  For Mr. Chubbs, I would have loved to put in more elbow points and other forelimb points, such as LI4 for immune regulation, but he quickly tried to lick out anything placed on his forelimbs and trying to distract him in order to do that stressed him.

How has acupuncture changed my practice?

I have recently started my own practice to solely focus on acupuncture.