Written by a Medical Acupuncture for Veterinarians course graduate. Author’s name available upon request. Signed release obtained from client/author. A2017010 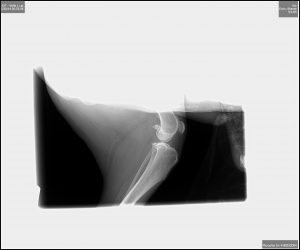 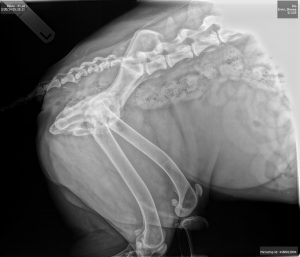 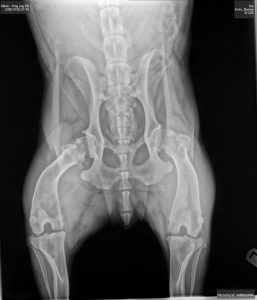 Abstract:
Dio has severe hip dysplasia and paralysis of the rear limbs since July of last year. He was not tolerating the medications he was being given to help him not be painful. The goals for my treatment for him were to see if I could help his paralysis and decrease his pain levels. I was also hoping to help with his incontinence too. In treating him, we were able to get him to only need his Meloxicam, which he tolerates very well. He was comfortable enough to play again and his attitude improved as he became less painful. His paralysis did not go away but he was able to haul himself up a few times and seems to feel his feet better. His incontinence improved but never has gone away.

Definitive (or Putative) Diagnosis (or Diagnoses):
Rear limb paralysis and muscle atrophy were found through the physical exam.
Anxiety was seen by watching his behavior.
Severe Hip dysplasia with DJD bilaterally was noted on radiographs and I felt the crepitus on my physical exam.
Dietary and Medication induced Enteritis were noted when he was given too many medications together in his history, and after feeding him too much chicken the first time I treated him.
Incontinence both neurologic in origin and medication induced were noted when on certain medications. The neurologic part was noted when he just leaked as he walked across the deck.

Outcomes, Discussions, and References: The overall outcome of doing acupuncture was that we were able to decrease the amount and number of medications that Dio was receiving to help keep him comfortable, thus decreasing his diarrhea episodes and incontinence incidents. He also seemed overall less anxious, which I believe is a combination of the points I used and having an almost two-hour session with his Mom and I, where he gets all of the attention and chicken baby food. He is also moving more fluidly and walking more once he is gotten up, which is directly related to the decrease in pain level that the acupuncture has given him. “The acupuncture of today employs filiform needles that directly engage connective tissue and collagen fibers, altering the cytoarchitecture of fibroblasts and tugging on somatic afferent nerve fibers in the vicinity. Sequelae of needle stimulation include local cytokine changes, neural receptor activation, blood flow changes and action potentials transmitted to the spinal cord and brain. Central nervous system changes reflect generalized neuromodulation and modified neuroendocrine regulation.” From Laser vs Acupuncture and Massage by Narda Robinson
The paralysis has not resolved though. ” As the leading choice for neurologic recovery, acupuncture (somatic afferent nerve stimulation) wins again as the most studied and best understood of all complementary and alternative medical techniques. Neuroanatomically designed needling protocols address neurophysiologic dysfunction peripherally, autonomically and centrally. After a medical acupuncturist identifies the locus of the lesion, she selects stimulation methods shown to repair nerve tissue at the site of damage and facilitate communication throughout the neural network.” From Acupuncture for Neurologic Recovery by Narda Robinson.  The only adverse event was when we gave him too much real chicken the first time, and he got pretty severe diarrhea from that. He has responded really well to the needles and not had any weird reactions to them or the electro-acupuncture. “A 2009 review by the Mayo Clinic’s Dorsher and McIntosh pointed to the accelerated improvements made possible on multiple measures with acupuncture. Indeed, they indicated that one study showed a “much larger effect of electroacupuncture on ultimate neurologic recovery from acute SCI than any pharmacologic intervention to date.” From Evidence Points to Acupuncture for Disk Disease by Narda Robinson.
I did not add in laser because I do not have a portable one, and he has the history of cancer in his anal gland and I did not want to risk causing him any issues with that.