Written by a Medical Acupuncture for Veterinarians course graduate. Author’s name available upon request. Signed release obtained from client/author. A2017009

Abstract
Cheyenne is a 26yo Quarter Horse gelding that has suffered from severe neuromuscular deficiencies for the last six months. He demonstrates a significantly decreased range of motion in the thoracic limbs and caudal cervical region. I was brought in on the case as a second opinion and using acupuncture and other medical interventions, have transiently improved the range of motion in his thoracic limbs.

History  Cheyenne has demonstrated subpar performance in the reining industry since he was first started under saddle. He was retired at an early age from performance training and kept as a casual trail horse and pasture ornament in the mountains of Colorado. In February of 2017, the owner was out of town and returned from her travels to find Cheyenne laterally recumbent and unable to rise. The clinical presentation she describes is most like that of a horse with tetanus. He recovered from the severe tetanic event, but has remained significantly impaired since then. The primary veterinarian wanted to pursue individual intraarticular joint therapy, at which point I was brought on the case for a second opinion.

Physical Exam and Clinical Assessment
On physical exam, Cheyenne presents as a horse in significant pain. His abdomen is fairly “tucked up” and his method of locomotion is a shuffle, most reminiscent of a horse in bilateral, full limb casts of the thoracic limbs. Abduction or adduction of either front limb is impossible as the limb is frozen in a completely extended position. If one does manage to lift the right front slightly off the ground, it’s a matter of seconds before Cheyenne falls over. Both toes are worn square from dragging. The owner notes he prefers to eat off the ground. Temperature, pulse and respiration were within normal limits (WNL), Serum Amyloid A was zero, the only abnormalities on blood chemistry were mildly elevated potassium and LDH levels, neither of which were elevated enough to assign clinical significance. Even CPK and AST were WNL! CBC was WNL. Palpation of the musculature of the thoracic limb and caudal cervical regions revealed severely contracted muscles, the structural rigidity of river rocks (see pictures). A complete neurological exam is difficult to perform on this horse but there is significant weakness of the hind end and his baseline ataxia worsens when his neck is extended, he is blindfold or asked to turn in sharp circles. His cranial nerves appear intact, pupillary light reflexes were WNL, and no weakness noted in perineal region.

Medical Decision Making
When presented with this case, it was immediately apparent that there was a defect in neuromuscular signaling pathways. In addition, given the severity of the chronic muscle contraction, I was concerned that there was widespread compromise to the vascular system in the effected regions. After placement of several needles, I was also aware that the mechanoreceptors and nocioreceptors may also be compromised as well. Initially, my intention was to provide neuromodulation to specific large nerves in the effected regions and modulation of the underlying connective tissue. Given that the patient was so cooperative, I took the liberty to branch outside of the traditional acupuncture channels and place needles in various other deficit regions I had identified on myofascial exam. My goal towards the end of my initial session was not only neuromodulation and muscular compliance but also increased vascular integrity and functionality.

Putative Diagnosis
Since EPM and Lyme are rare in Colorado, these differentials fell lower on my list and suspicion of spinal cord impingement in the cervical region became a more likely diagnosis. Cheyenne is currently receiving 10,000 IU/day of water soluble Vitamin E to rule out EDM and given his advanced age, I felt safe ruling out NAD. PSSM is still a possibility but unlikely to contribute to his severe neurologic signs. The current explanation for his clinical presentation is significant compression of the spinal cord, the cause of which is unknown. The results of his neurologic exam point to involvement in the C6-T2 region given the hypertonicity of the thoracic limbs and weakness of the hind limbs. Imaging in this region is difficult and I doubt this horse would fare well on a trailer ride for a myelogram or CT of the cervical spine. The next time I have the opportunity, I intend to take complimentary cervical radiographs, more as a learning opportunity for myself than as a definitive diagnostic measure.

Acupuncture Treatment
The following is a list of points utilized on Cheyenne, in addition to multiple regional points determined during the myofascial exam: LU 1, LU7, LI – 6,7,10,11, 15,16,17, ST 10, HT 1, SI – 9, 11, 12, BL – 11, 12, 13, PC 6, TH – 14,15,16, GB 21 and Bai Hui. Most of these points were selected due to their association with major nerves located within the effected regions. Additional points were selected to address myofascial restrictions, overall wellness and to increase blood flow in specific areas. A combination of dry needles and electrostimulation was utilized. Cheyenne received three acupuncture sessions before it was determined that while there was some improvement noted, the progress was not sufficient enough to continue the financial investment. This patient has also been medicated with varying trial regimens of 55mg/kg BID methocarbamol, 2g/day bute, prednisolone starting at 400mg SID, firocoxib at 114mg/day and gabapentin without significant resolution of clinical signs. He also received three massage sessions with minimal improvement noted. 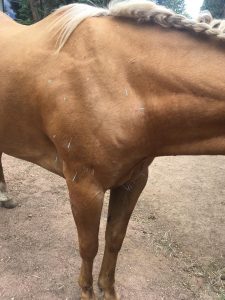 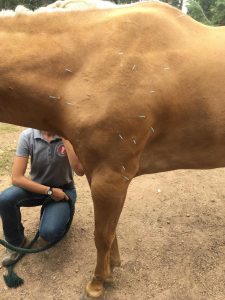 Outcome
Cheyenne continues to exist in moderate discomfort. He is currently on 114mg of firocoxib daily with intermittent prednisolone therapy as needed per the owner’s discretion. His transient response to acupuncture was favorable as he could bend his knee for three days after each session with visibly less toe drag. I attribute the observed progress to local neuromodulation of the main nerves in the caudocervical and thoracic regions in addition to medicinal intervention. Given that minimal progress was made in the tonicity of his musculature, I think increased blood flow played a debatable role in his favorable response. The only adverse event noted was occasional degeneration in ataxia while on high doses (55mg/kg BID) of methocarbamol.

Revelations
The most interesting part of this case for me was the localized impact acupuncture can have, even in the presence of significant neural compromise and neuromuscular degeneration. I learned that in most cases, acupuncture can be a viable therapeutic modality and that its applications can and should extend outside of just neuromuscular diseases. In the future, given the breadth of neuromodulation, I will feel more comfortable with the implementation of acupuncture into my medicine cases including recurrent airway inflammation/obstruction, immune mediated disorders, medical colic and ocular disorders among many others.