Written by a Medical Acupuncture for Veterinarians course graduate. Author’s name available upon request. Signed release obtained from client/author. A2017027 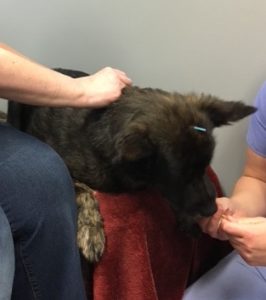 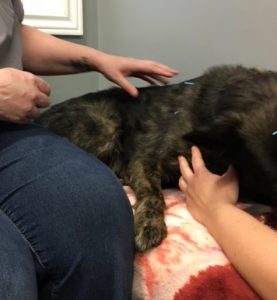 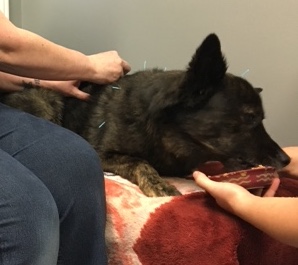 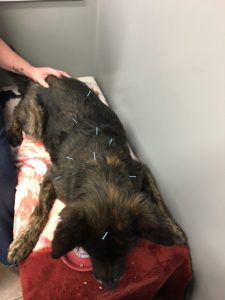 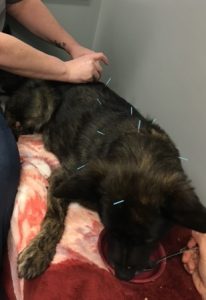 Abstract: Clyde presented for a suspected vaccine reaction following his first crLyme vaccination in June of this year. Full blood work, urinalysis and radiographs were completed, with the only abnormality found being calcification of the intervertebral disc between cervical vertebrae two and three. Clyde was treated with a series of chiropractic manipulations by an associate veterinarian, but he continued to decline in both posture and temperament. Chiropractic treatments were discontinued and Clyde was started on laser therapy and acupuncture. His clinical symptoms resolved within one week, he was weaned off of all oral medications and he has continued to be symptom free.

History and Presentation: Clyde, an eight year old neutered male collie-type mixed breed dog was presented for annual examination May 17, 2017. He was given his annual Leptospira vaccination and he received his first crLyme vaccination. Two days later Clyde’s caretaker reported symptoms of ear discomfort, lethargy and general “ain’t doing right”. He was sent home with Vanectyl-p for skin/ear irritation, but after two days he had not improved and came back for a full work-up. Blood work, urine and radiographs, otoscopic and rectal exams were all normal except for mineralization in the intervertebral disc between C2-3. Chiropractic manipulations were started with the focus on malalignment in the cranial cervical region. These manipulations appeared to help for a short time, but then seemed to be needed more often and dog’s temperament became increasingly more aggressive at home and in the office. He was started on Meloxicam and Gabapentin on September 20th + 25th, but those had to be discontinued due to vomiting. Clyde has a history of anal gland impactions, bladder infections, and he was drug behind a car in 2011, resulting in severe “road rash” of his ventral thorax and the dorsal aspects of all four paws, including traumatic amputation of each second digit on the hind paws, at the level of the metatarso-phalangeal joints. Owner recently adopted a Saint Bernard puppy and moved into an apartment with a long flight of steep stairs.

Physical Examination and Clinical Assessments: His first acupuncture assessment and treatment was September 26th. Abnormalities on his exam included a wide taught band just cranial to the right shoulder, several long/slim taught bands along C2-4 bilaterally, tension and mild tenderness along the dorsal scapular regions and painful to palpate his lumbar back just cranial to the tip of the left ilial wing. Marked decreased range of motion in metacarpo-phalangeal joint of each front fourth digit.

Medical Decision Making: Given his apparent lack of response and/or intolerance to Vanectyl-p, Meloxicam, Gabapentin and the chiropractic manipulations we elected to stop all medications and try laser plus acupuncture to try to relieve neck pain, shoulder and back tension.

Definitive (or Putative) Diagnosis (or Diagnoses): Working diagnosis of muscle strain and dysfunction caused by trauma and degenerative changes as listed above.

Acupuncture Treatments: September 26 – Seirin 0.16 x 30mm J type coated needles were used for his first treatment to assess his reaction to being needled; these were well tolerated. October 3rd, 10th, 17th and 31st we used Seirin 0.20 x 30mm J type coated needles. Thus far he has only had dry needling done, no electroacupuncture. He has also been treated with a Class IV laser (three sessions a week x 2 weeks, then weekly for 1 month), with treatment being focused on the right cranio-dorsal neck and left caudo-dorsal lumbar region. We would like to focus on his feet at a later date (he is not very tolerant of any handling of his feet so far and I feel that he needs more than just laser to improve function in the front paws).
Acupuncture points selected included GV20 and BL10 to help calm him; Bai Hui, GV3, GV4 and GV14 for regional tension/tenderness/dysfunction; LI11, LI12, BL11, BL12, BL13 where tension was appreciated on palpation; trigger points in the triceps, taught bands along cervical vertebrae 2-4, and in the tender region just cranial to the tip of the left ilial wing. No distal points were used given his aversion to having his feet handled.

Outcomes, Discussions, and References: Caretaker reported immediate resolution with regards to his posture, ear position (he would flick his right ear and hold it out from his head when he was experiencing pain), and temperament. Unlike chiropractic treatments he expressed no aversion to being examined or treated with the exception of one strong reaction when a taught band cranial to the left ilial wing was needled during his second treatment (he had to be restrained and sometimes muzzled to have his chiropractic adjustments). He has shown no signs of relapse since starting treatment and we are slowly weaning the frequency of his treatments to try to determine appropriate treatment intervals for the future. He is back to playing and running off leash and seems to be fully comfortable and functional.