Written by a Medical Acupuncture for Veterinarians course graduate. Author’s name available upon request. Signed release obtained from client/author. A2017029 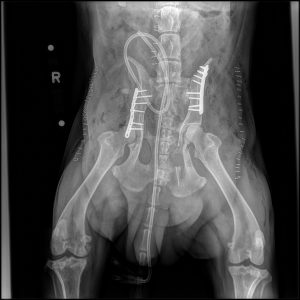 History and Presentation:
The patient was presented on emergency/referral basis for bilateral ilial fractures. No significant prior medical conditions were reported by the owner. She was stabilized and evaluated for surgery. Although she was unable to support weight, she had sensation in all of her pelvic limb dermatomes and a positive withdrawal reflex. The fractures were stabilized with two 2.7mm buttress plates.
Physical Examination and Clinical Assessments:
Forty-one days post surgery the patient was able to stand and support weight with assistance. She would stand on the anterior surface of the metatarsus/digits. Most of her weight was shifted to the thoracic limbs. She could walk normally with her thoracic limbs, but “knuckled” on her pelvic limbs, and fatigued quickly. Withdrawal reflexes were normal in the thoracic limbs, and were present but diminished in her pelvic limbs. Patellar reflexes were present bilaterally. Conscious proprioception and postural reactions were normal in the thoracic limbs and absent in the pelvic limbs. There was no crossed extensor reflex in either the thoracic or pelvic limbs. Taut bands were noted in the lumbar paraspinal muscles as well as both infraspinatus and triceps muscles.

Medical Decision Making:
The most pressing problems were disuse of the pelvic limbs, resultant muscle atrophy, and the inability to flex the hock and extend the digits for normal foot placement. The underlying problem was neurologic and not orthopedic. Pain was well managed. Therefore, the acupuncture focus was to modulate the nerves of the pelvic limbs with an emphasis on the suspected affected spinal cord segment, sciatic nerve and fibular nerve.

Differential Diagnosis:
The rule-outs for the delayed recovery post-surgically were: orthopedic dysfunction (implant failure), post-surgical infection, circulatory dysfunction, or neurologic dysfunction. Radiographs revealed good stabilization of the fractures with no evidence of infection. Limb perfusion was deemed to be normal. Neurologic tests were consistent with a spinal cord lesion. Advanced imaging was not an option due to owner financial constraints.

Definitive Diagnosis:
While further imaging would have been helpful to definitively localize the lesion, the assumption of spinal cord compromise in the caudal lumbar/sacral region was made. Since the neurologic lesion was bilateral it was thought unlikely that two separate lesions were present. The normal patellar reflexes would indicate the femoral nerves were unaffected. The sciatic nerve with its fibular nerve component emerges from the L-6 to S-2 vertebral segments. Radiographically the trauma was to the pelvis and sacral region. These factors support the assumed localization to the caudal lumbar/sacral segment.

Acupuncture Treatments:
Prior to beginning acupuncture, swimming and walking in a shallow pond had been instituted for 3.5 weeks. Acupuncture was performed nine times. The first six sessions were biweekly, and the last three were one week apart. During the treatment course, local and central points were chosen to target the affected spinal cord segment and nerves based on anatomical relationship and veterinary literature1,2,4. Dry needling was performed on both pelvic limbs, bilateral Bladder, and Bai Hui points as follows:
Bafeng points to stimulate the digital nerves
LR-3 to target the deep fibular nerve
BL-60 to stimulate the fibular and tibial nerves
ST-36 to stimulate the fibular nerve, cranial tibialis muscle and for its general anti-inflammatory effects
BL-39 to stimulate the fibular nerve
GB-30 and BL-54 to affect the sciatic nerve
BL-25, 27, 28 and Bai Hui were chosen in an attempt to stimulate points cranial and caudal to the lesion4
Electroacupuncture (EAP) was unavailable until the seventh treatment. At that time stimulation from ST-36 to BL-60 was performed.1 The EAP unit@ was set at 10Hz continuous frequency2,4. The level varied from 1-3 based on patient response and duration was twenty minutes. EAP stimulation cranial and caudal to the cord lesion has been supported by studies1,2,4. This was not performed due to the implants in that region3. During each session taut bands were identified and treated with dry needling. 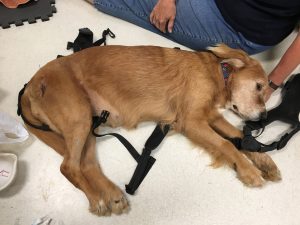 Outcomes, Discussion:
During the course of treatment the patient’s ability to ambulate improved steadily (see videos). There were increasing instances of proper foot placement. Only acupuncture and therapeutic exercises have been performed. The exercises from day 35 to 63 post-op decreased edema and improved strength. It was not until after acupuncture was instituted that the progress accelerated. The patient’s progress and increase in sensory response to needling and EAP support acupuncture’s role in her recovery.