IVDD and Osteoarthritis in a 14 Year Old Standard Poodle

Written by a Medical Acupuncture for Veterinarians course graduate. Author’s name available upon request. Signed release obtained from client/author. A2017040 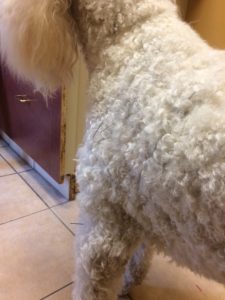 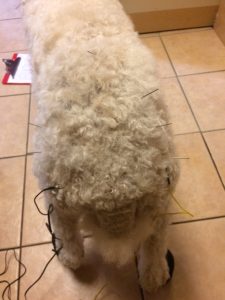 Abstract: A 14 year old female spayed standard poodle presented with a 1 month history of hind end weakness that progressively worsened over the last few weeks especially on the right. Suspected mild IVDD and osteoarthritis was diagnosed. The treatment plan involved medical management with Rimadyl, spinal and hip radiographs, canine orthopedic boots on the hind paws, acupuncture, laser therapy, and electroacupuncture. Instructions were also given for owners to give light massage to patient daily around the lumbosacral area. Response to treatment was a success thus far with continued
acupuncture, laser therapy, electroacupuncture, decreased nsaid therapy, and no need for orthopedic boots at this time.

History and Presentation: Patient is a 14 year old female spayed standard poodle that presented for bilateral hind end weakness, difficulty rising and sliding on wood floors. Owner notes that patient appears to have more difficulty on the right hind and it has been a slow progression. No history or orthopedic trauma. Past medical history includes septic peritonitis secondary to stump pyometra. Patient recovered uneventfully after surgery and extensive supportive therapy (2013).

Definitive (or Putative) Diagnosis (or Diagnoses): Radiographic evaluation helped confirm suspicion of mild IVDD and osteoarthritis. Ideally CT or MRI would be warranted but the owners declined at this time.

Acupuncture Treatments: After the initial 60 minute consultation the patient was seen once a week for the first 6 weeks followed by every 2 weeks for 2 treatments then every 3 weeks. For the initial treatment needling was used at points BL23, BL27, BL28, (all were areas of discomfort) GV20, GV14, GV4, Bui Hui, GB29, GB30 and BL 54 (Hip Triad). GV20 was selected to reduce anxiety although this point has not been well tolerated in this patient in subsequent treatments . During the initial session coated seirin needles, 0.20 x 30mm and 0.16 x 30mm were used. During subsequent visits Hwato non-coated needles (0.20 x 30mm) were used due to them staying in place better. Electroacupuncture as well as laser therapy were also utilized after the initial treatment to decrease anxiety of the patient. During the second appointment additional points were added such as BL10 (cervical tension), LI11, cervical spinal points, ST36, BL60, SI10, SI11, trigger points along the biceps brachii, Baxie bilaterally as well as laser therapy at both hips and
lumbosacral area. After the first 2 treatments the patient significantly relaxed and we were able to apply needles to the above mentioned points as well as start electroacupuncture at the lumbosacral area. All of these modalities have been well tolerated by the patient especially when frozen baby food is offered. In addition to acupuncture the owners have been applying light myofascial massage at home at least once a day as well as initially using orthopedic boots at home on the hind end for stability. After the first 6 weeks of treatments the patient no longer required the boots.

Outcomes, Discussions, and References:
After the first session the owners reported an increase in mobility. The patient is more interested in attempting the occasional stairs as well as exploring more of the backyard. Every appointment after, that the owners reported a slight increase in comfort followed by great success after 6 weeks when it was noted that the patient no longer required the orthopedic boots. It has been such a pleasure watching an otherwise painful, uncomfortable senior pet regain her confidence and quality of life. The last appointment the owners shared with me that until they found acupuncture this last summer they were a
few weeks from humane euthanasia. What an incredible feeling to give this patient and her family some more time that is pain free and joyful. Interesting literature- “Effects of electostimulated acupuncture on ground reaction forces and pain scores in dogs with chronic elbow joint arthritis” Bollinger et al. Vet Comp Orthop Traumatol 2002; 15: 116-122.