Written by a Medical Acupuncture for Veterinarians course graduate. Author’s name available upon request. Signed release obtained from client/author. A2017048 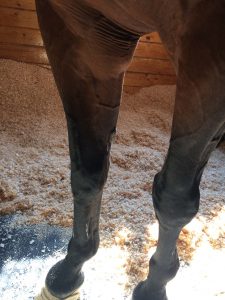 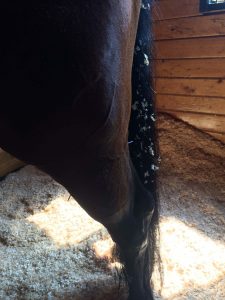 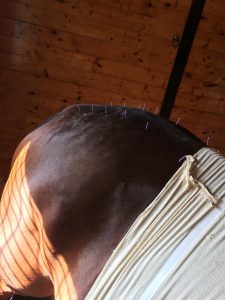 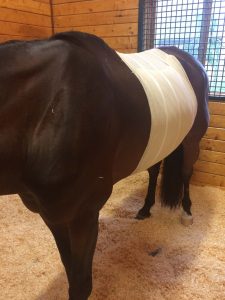 History and Presentation: On 7/9/17, Val become acutely colicky (pawing, sweating, rolling). No
changes in appetite, drinking or manure output had been noted. Only known colic episode was a mild
pelvic flexure impaction two years prior. On PE, GI sounds were absent and he was tachycardic.
Abdominal ultrasound revealed two loops of dysmotile, distended small intestine with a thickened wall.
Rectal examination revealed dilated, thickened small intestine and mild gas distension in the colon. A
nasogastric tube (NG) was passed and malodorous reflux was returned. Based on suspicion of a surgical
small intestinal lesion, Val was referred into the hospital.

Physical Examination and Assessments: At the hospital, Val was tachycardic, hypovolemic, and had
absent GI sounds. Val was refractory to sedation and continued to try and go down in the stall. An
abdominocentesis was performed and the peritoneal fluid was serosanguinous with increased lactate. An
emergency exploratory celiotomy was performed and an epiploic foramen entrapment was discovered
with fifteen feet of incarcerated small intestine affected. The affected intestine was resected and an endto-
end anastomosis was performed between the jejunum and ileum. Post-surgery, Val was maintained on
intravenous (IV) antibiotics (Gentamicin, Potassium Penicillin, and Polymixin), Banamine, constant rate
infusion of Lidocaine, IV fluids with potassium and calcium, DMSO, and Vitamin B. Two days postsurgery,
7/11/17, Val starting showing signs of discomfort (pawing, increased heart rate). A NG was
passed and net reflux was obtained. Repeat abdominal ultrasound revealed hypomotile small intestinal
loops. An NG tube was passed four times throughout the day and night on 7/11/17 and net reflux was
obtained each time.

Medical Decision Making: After abdominal surgery, especially a small intestinal resection and
anastomosis, postoperative ileus (POI) is a common sequela. Val was mildly colicky and producing
reflux post-op, so ileus was the primary concern. Val was receiving the common post-op medical
treatments, so I wanted to be able to add in acupuncture as an integrative therapy to promote GI motility.
I first approached the case by performing an acupuncture scan to be able to treat positive points. To
promote GI motility, I explored the neurophysiology of various pathways to target points with
autonomic control over the GI tract.

Acupuncture Treatments: Three dry-needling treatments were performed, focusing on points
promoting gastrointestinal motility and sensitive points on scan. Val had a belly bandage on to support
his abdominal incision, obscuring acupuncture points in that region. GB 21 was used as my permission
point and for the calming properties. As the master point of the cranial GI tract with anti-nausea effects,
PC 6 was included, as Val was refluxing. As the master point for the GI tract, ST36 was included and
for its autonomic effects over the GI tract and anti-inflammatory effects via the peroneal nerve. The
bladder points, especially BL 21 – BL 27, were sensitive on scan, and affect the GI tract centrally via
spinal nerves. They indicated in cases of digestive problems, intestinal pain, and small intestinal issues. I
included Bai Hui as a balancing point and the central effects on the GI tract through the lumbar spinal
nerves. I wanted to try San Jiang on Val for its autonomic effects, specifically the vagal reflux through
the trigeminal nerve. LI 11 was included for its immunomodulatory and anti-inflammatory effects, as
there was likely inflammation present contributing to the POI. SI 9, BL 13, and BL 54 were included in
the third treatment as there was sensitivity there on my scan, likely secondary to anesthesia and
recovery.
Treatment 1 – 7/12/17 – GB 21, LI 11, PC 6, Bai Hui, BL 25, BL 26, BL 27, ST 36, BL 40
Treatment 2 – 7/13/17 – GB 21, San Jiang, PC 6, BL 13, BL 23, BL 25-29, Bai Hui, ST 36
Treatment 3 – 7/14/17 – GB 21, SI 9, BL 13, Bai Hui, BL 25, 26, 27, BL 54, ST 36

Outcomes and Discussions: During his treatments, Val was visibly relaxed with his head down. During
his first treatment, he passed a small amount of gas and began nosing through the shavings, looking for
food. After the first treatment, he no longer had any colic signs, ceased refluxing, and abdominal
ultrasound showed increased small intestinal motility than previously. By his third treatment, Val’s GI
sounds were present in all quadrants, he had a great appetite, and he was passing normal manure. Over
these three days, he remained comfortable and was weaned off his Lidocaine and IV fluids. I felt
comfortable using medical acupuncture for a musculoskeletal issue, but did not have the experience
using it for a medical case. It was especially rewarding to apply acupuncture in a case where the
common medical therapies were being utilized to promote motility and were not successful on their
own. Much of my medical experience has been equine patient care and medical acupuncture is another
important adjunctive therapy to add to my toolbox for hospitalized patients. Since this case, I have
started to apply acupuncture to non-surgical/medical colic cases and have had great results! POI is a
major concern in horses and humans alike and significantly lowers quality of life. Many acupuncture
related research has been dedicated to POI in humans. Fang et al. (2017), published in Nature, found that
electroacupuncture administered at ST36 shortened the recovery time of GI transit, and significantly
increased gastric emptying. Similarly, Jung et al. (2017) found that acupuncture promoted the passage of
sitz markers, which may reflect the possibility of reducing POI after distal gastrectomy. These studies,
among others, can be translated to equine patients suffering from POI, as there are less studies
describing acupuncture as a treatment for equine POI.