Written by a Medical Acupuncture for Veterinarians course graduate. Author’s name available upon request. Signed release obtained from client/author. A2017056 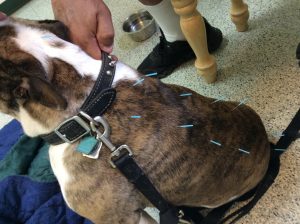 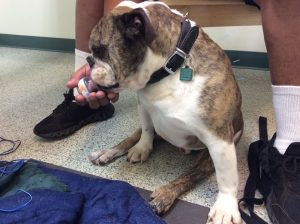 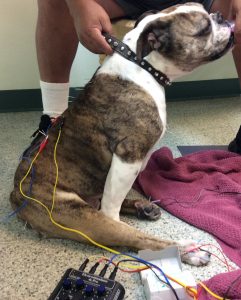 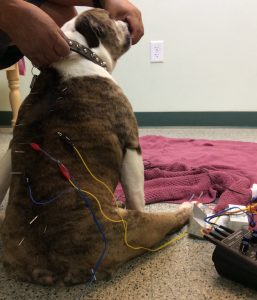 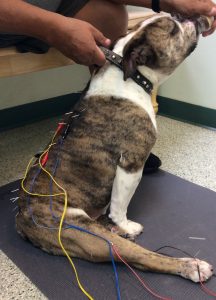 Abstract: This case report follows the treatment of a bulldog with severe, long standing hind limb paresis. He was treated with acupuncture, electroacupuncture, home exercises/physical therapy and home massage. These treatments led to functional improvements in the patient in a short amount of time.

History: Gus is a 6 year old, neutered male English Bulldog. He presented on May 4, 2016 for progressing ataxia in the pelvic limbs. On physical exam (PE), he was ambulatory but paraparetic with marked proprioceptive ataxia in both hind limbs (scuffed both hind paws, crossed both hind limbs significantly, occasionally walked on the dorsum of the paws). Conscious proprioception (CP) placement of paws was normal in the thoracic limbs, decreased in the right pelvic limb, decreased to absent in the left pelvic limb. He had increased patellar reflexes bilaterally. He had pain on palpation of the thoracolumbar (T/L) spine. He also had crepitus on range of motion in both stifles. Radiographs of the thoracic and lumbar spine, stifles, pelvis and coxofemoral joints were performed. These showed multiple hemivertebrae with kyphosis in the caudal thoracic spine, narrowed caudal thoracic disc spaces, including T13-L1, bridging spondylosis deformans ventrally from T10-T12, moderate lumbosacral (L/S) spondylosis deformans, sacral and coccygeal vertebral malformations, shallow acetabula with mildly subluxated femoral heads but no secondary degenerative bony changes, mild osteoarthritis (OA) and effusion or soft tissue thickening in both stifle joints. Gus was referred to a neurologist who confirmed a diagnosis of T3-L3 myelopathy, with possibly an L4-S3 myelopathy. The owners did not elect to pursue advanced imaging, surgery or physical therapy at that time. Gus was started on gabapentin for pain control. His ataxia continued to progress and he has been in a wheelchair for approximately 6 months.

Physical Exam and Clinical Assessments: On May 13, 2017 Gus was non-ambulatory in his pelvic limbs. When assisted, he was capable of slight pelvic limb movement. He could stand unassisted for only a couple seconds before collapsing onto one hip. CP was absent in both hind limbs. Withdrawal was present in both hind limbs, but delayed in the left hind. He had a normal to increased patellar reflex in the right hind, I was unable to elicit a reflex in the left hind. He had control of his bladder and bowels and had normal anal tone. He was reactive/painful on gentle palpation of the T/L junction area of his spine. Gus has hypertrophy of his neck, chest, shoulder and forelimb muscles with tense muscles and some trigger points in these areas (especially the pectoral, caudal trapezius, rhomboideus, latissimus, supraspinatus and triceps muscles).

Medical Decision Making: Treating the caudal thoracic to cranial lumbar and the caudal lumbar to sacral area inner bladder line points will be important for pain control and to stimulate nerve signal transmission from these spinal segments to the brain and to the pelvic limbs. Distal points that correspond to the sciatic and femoral nerves and their branches will help facilitate nerve signal transmission. I will include points to balance the autonomic nervous system, provide immune system stimulation and hopefully relax the patient during the treatments. I will use points to treat the compensatory strain patterns and trigger points. I will treat coxofemoral and stifle points–this is important as he‘ll need to be as comfortable as possible to use his hind limbs again. Home exercises, physical therapy (PT) and massage will also be important for strengthening and to retrain normal hind limb ambulation. We added oral carprofen for pain control.

Outcomes/Discussion: Gus is now able to rise and stand unassisted long enough to eat his meals and to urinate/defecate. He can ambulate a few correct steps with both hind limbs but fatigues quickly–he’ll continue to walk, but incorrectly (hind limbs out behind him, walks on dorsum of left hind paw). The clients feel he is happier and more comfortable since starting acupuncture. They notice the greatest difference in his comfort level and ability to ambulate correctly the first 2 days after an acupuncture session. They plan to continue weekly treatments until Gus is stronger and able to use his hind limbs correctly for more sustained periods. Gus was anxious about acupuncture initially, but has become much more relaxed and seems to actually enjoy the sessions now. This case has shown me what an amazing difference acupuncture can make in a patient’s, and the client’s, lives! I was worried we wouldn’t get a response in the short amount of time required for my case report (given how long Gus has been in a wheelchair), but we have. The clients are thankful and it has been an extremely rewarding experience for me. Acupuncture has renewed my excitement about veterinary medicine. Thank you!