Myofascial Dysfunction and Anxiety in a 4 Year Old Weimaraner 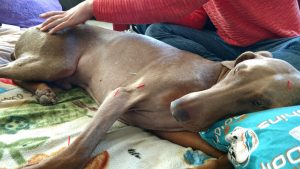 History and Presentation: Dash first presented on September 24th, 2017, for examination and
acupuncture treatment pertaining to his anxiety. Client reports that Dash will often have periods
of shaking and trembling. He would become very agitated and vocal whenever a loud car or
motorcycle drove by the home and did not travel well in the car, often becoming violent and
hurling himself at the windows. Dash is otherwise in good health. Complete wellness profile in
April of 2017 reveals no significant abnormalities. He is regularly administered Nexgard
(tick/flea preventative), Welactin (an omega-3 oral supplement), and Dasuquin Advanced (joint
supplement).

Other Medical History/Treatments: Dash had orthogonal radiographs of both carpi performed on
October 11, 2017. No fractures or evidence of arthritis appreciated. On the AP view I appreciate
a slight incongruity between the right and left radiocarpal bones, where the right radiocarpal
bone appears slightly deviated medially. These radiographs were sent to a canine chiropractor in
the area for referral. Dash also had orthogonal radiographs of his thoracic and lumbar spine
performed on November 20, 2017. No fractures, luxations, disc space narrowing, or other
abnormalities appreciated.

Physical Examination and Clinical Assessments: On physical examination Dash is bright, alert,
and responsive. He is trembling and seems anxious. Bilateral mild to moderate mydriasis is
present. Heart and lungs auscult within normal limits. His hair coat is very short and sparse with
a coarse texture. Cervical passive range of motion (enticed to bend laterally with treat) is normal.
Subtle thoracolumbar kyphosis is appreciated. Myofascial examination reveals sensitivity to
palpation of longissimus dorsi and iliocostalis muscles at level of T11-L2. Dash has mild
sensitivity and hypertonicity of both tricep mm, long heads. Dash also exhibits moderate
decreased passive flexion of both carpi by about approximately 20-25 degrees and hypertonicity
of bilateral lateral digital extensor muscle bellies and to a milder extent bilateral extensor carpi
ulnaris muscle bellies.

Medical Decision Making: I discussed with the client the physical medicine approach and my
goal to assess and treat the whole patient. Myofascial exam findings correlate with client’s
observation of bilateral forelimb discomfort localized to the antebrachial extensors. While there
are many points that do offer parasympathomimetic effect and can positively affect level of
anxiety, if Dash’s clinical signs of anxiety are due to lack of appropriate desensitization training
the neuromodulation may not have drastic effect. However, many times by treating other areas of
myofascial dysfunction and pain we can positively affect the homeostasis of the branches of the
autonomic nervous system and see a reduction in clinical signs of anxiety or stress as well. I
think it was wise to pursue radiographs of the carpi as well as the vertebrae to rule out any
underlying bony infections/neoplasia/fractures/luxations/etc. With these differentials ruled out
we can more confidently approach Dash with acupuncture as a reasonable mode of treatment. 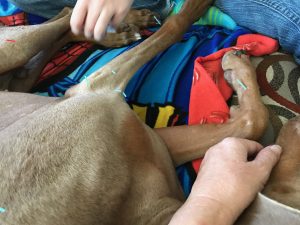 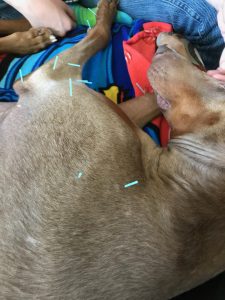 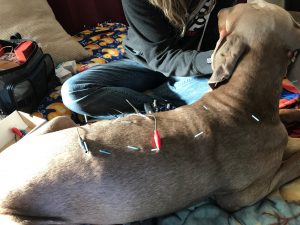 Acupuncture Treatments: Dash was treated once weekly for eight weeks with a mixture of
0.16mmx30, 0.20mmx30, and 0.20x15mm Seirin coated needles. Each treatment lasted
approximately 20 minutes. Dash’s treatments revolved around a subset of points known to be
parasympathomimetic, including GV 14, GV 20, Bai Hui, LI 11, LI 4, and ST 36; hence
addressing his heightened sympathetic state. Additional points to treat emotional stress and/or
anxiety included HT 7 and PC 6. Needling of GV 14 also allowed stimulation of the
cervicothoracic spinal segments that supply the thoracic limbs. Local points included those that
addressed the nerves that supply the forelimb extensors, namely the radial nerve. Such points
included LI 11, LI 10, LU 5, LU 7, LI 4, TH 10, and SI 9; the majority of these points were
stimulated with 15mm needles. Depending on his myofascial re-examination, Dash had BL
points spanning his thoracolumbar region needled. He received electroacupuncture on the
11/18/17 and 11/25/17 treatments spanning BL-19-23 bilaterally with Dense Disperse
2Hz/100Hz for approximately 10 minutes each treatment using a Pantheon 4c. During the
treatment on 10/29/17 after having a hard “play day” with his housemate the day before, he
demonstrated mild to moderate sensitivity in his right shoulder and bilateral semimembranosus
mm. He also had an active trigger point in his right omotransversarius just cranial to the scapula.
Due to these changes in his exam during this treatment he also received needles at GB 21 (thru
the trigger point in order to deactivate), BL 54, GB 29, GB 30, and BL 40 as well as sacral spinal
segments to provide central nervous feedback for the pelvic limbs (specifically the caudal
branches of the sciatic nerve). Future myofascial examinations showed resolution of the
semimembranosus mm dysfunction. Further along in his treatments he also received bilateral
electroacupuncture across both carpi. Depending on patient recumbency points used for
electroacupuncture included LU-7 to LI-4 and LI-10 to SI-3, Dense/Disperse, 2Hz/100Hz for
10-15 minutes.

Outcomes, Discussions, and References: The client observed that after the first treatment Dash
was overall calmer for about 5 days. After the subsequent treatments the client has noted that
Dash has had fewer and fewer episodes of anxiety and they are less severe when they do occur. I
observed during my myofascial exam prior to his fifth treatment that his left carpal flexion range
of motion had improved by about 15 degrees. The right carpus flexion range of motion has
improved by about 7-10 degrees. Over repeated treatments his left carpus regained almost
completely normal flexion range of motion. His right carpus continues to have restriction but
responds with each treatment to obtain almost completely normal flexion range of motion as
well. Bilaterally he demonstrates less sensitivity to palpation of his carpi and gladly receives
some gentle joint manipulation during treatments. Dash also responded well to acupuncture
along the BL line where myofascial dysfunction was appreciated. He continues to have
occasional episodes of hypertonicity with tenderness in longissimus dorsi mm at T-L junction
that responds very well to weekly treatments with electroacupuncture. I discussed referring Dash
to a veterinary chiropractor to address the possible subluxation in right carpus.