Myofascial Dysfunction and Osteoarthritis in a 8 Year Old Boxer 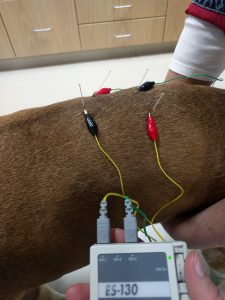 Abstract :
Kona Jenkins is an 8 year old, spayed female Boxer who suffers from chronic pain, most
notably in her caudal thoracic and lumbar paraspinal muscles and right stifle.
Kona tolerated acupuncture quite well and seemed very happy to participate in the
treatments. She is normally quite anxious at the veterinary office, but she was noticeably calmer
after placing a few needles.
Mrs. Jenkins reported that Kona slept much better than normal for a couple days after
each treatment. She also stated that Kona is more eager about going on walks and went further
on her walks than she has in several years. She even noted “she almost gave me shin splints she
was walking so well!”

History and Presentation :
Like many Boxers, Kona has had several health conditions in her life. She has a history
of mast cell tumor (MCT) on her left front leg which was surgically removed in October 2013.
She had another MCT on her left hind leg surgically removed in November 2016.
Starting in November 2011 she had back pain that ultimately lead to referral for magnetic
resonance imaging (MRI) in September 2015, which revealed a right ventral intervertebral disc
extrusion with dorsolateral stenosis at T9-T10 and a right ventral intervertebral disk protrusion
with foraminal stenosis at L7-S1. The L7-S1 lesion was thought to be incidental and was not
addressed further, but a right hemilaminectomy was performed at T9-T10.
In August, 2017 she returned to the neurologist due to pain that owner believed was
recurrence of her back problems and instead was diagnosed with an acute cruciate ligament
injury of the right stifle. Per the neurologists notes, she had pain with flexion of the right stifle
and a positive partial tibial compression test. The owner elected to opt out of surgical correction
and she was maintained on Carporfen as needed. She currently only gets Carprofen a couple
times per week. She is not receiving any other pain management.

Physical Examination and Clinical Assessments :
11/09/2017: Kona was bright, alert, responsive and very friendly on exam. She walked
with a pacing gait and with kyphosis of the caudal thoracic and lumbar spine. She did not
demonstrate any conscious proprioceptive (CP) deficits. Her cranial nerve reflexes were normal.
She had taut bands in her neck and her cervical musculature was generally thickened, but she did
not seem to demonstrate any tenderness to palpation of the neck. She had tenderness to palpation
over the infraspinatus muscles, especially on the left side. She exhibited tenderness to palpation
over the caudal thoracic and mid-lumbar paraspinal muscles. She had warmth and restriction of
skin movement over the mid lumbar region. She had some tenderness to palpation of her right
elbow laterally and trigger points in the extensor muscles in her forearm. She had medial buttress
formation of the right stifle and tenderness when palpating the stifle, especially the lateral aspect.
She had trigger points in the cranial tibialis as well. No drawer sign was appreciated on exam.
11/13/2017: Kona’s general and neurological exam were unchanged from 11/09. On
myofascial exam, there was now tenderness to palpation along lateral aspect of neck on both
sides. She was also tender to palpation along the lumbar spine, especially when palpating near
outer bladder line. She continued to have tenderness to palpation of the caudal thoracic spine and
the right stifle at the lateral aspect and when extending stifle fully.
11/20/2017: Kona’s general and neurological exam remained unchanged. Her myofascial
exam also was largely the same as previous and revealed taut bands in the neck and also lumbar
spine. She still walked with a pacing gait, but would occasionally take a few steps with a more
normal 4 beat pattern before returning to the pacing gait.

Medical Decision Making :
My goals for Kona were to improve her pain level and her quality of life. Due to the
chronicity of her pain, I did not anticipate a significant change after just a few sessions, but I was
hopeful that her owners might see at least a subtle difference in her overall wellbeing. My plan
was to start with small coated needles and gradually work up to larger uncoated needles and
electroacupuncture focusing on the areas that seemed the most tender at each session. I planned
on including relaxation points to calm her at the beginning of sessions, cervical points for the
tension in her neck, bladder points for the myofascial dysfunction of her back and for the nerve
roots supplying the stifle, and local stifle points for pain relief and to promote healing of the
stifle joint and associated tissues.

Acupuncture Treatments :
11/09/2017 : As this was Kona’s first experience with acupuncture, I began by using small
coated needles (0.16mm x 30mm Red Serins). I chose GV20 and GV14 to help her relax and
assess her response to needling. Once I saw how well she tolerated that, I proceeded with the
rest. I chose SI11 (bilaterally) because of tenderness to palpation of the infraspinatus muscles.
I chose LI10 and LI11 on the right since she had some tenderness to palpation of her right elbow
laterally and the trigger points in her extensors. Ideally I would have done these points
bilaterally, but they were difficult to access in left lateral recumbency which seemed most
comfortable for her.
I also placed BL19 and points along inner bladder line lateral to T9 bilaterally. These
were chosen based on where he seemed to have the most tenderness to palpation along her back.
I also placed ST34 and ST36 on the right. I would have preferred to place additional local stifle
points (eg SP9 and SP10) but due to patient position, the stomach points were chosen. Distal to
the stifle, the cranial tibialis contained taut bands, so I hoped that ST36 would also help with
that. The needles were left in for about 15-20 minutes.
11/13/2017 : Kona seemed excited to visit us for her second treatment. Because she
tolerated her first treatment so well, I increased from 0.16mm to 0.20mm needles (0.2mm, 30mm
Serins). I chose GV14 both for its parasympathomimetic effects and cervical pain noted on
exam. Several inner bladder line points were chosen based on areas of tenderness or taut bands
on physical exam, including BL21, BL22, BL23, BL25, BL50, and BL54. Because there did
seem to be significant tension in the neck, I added BL10 and GB21 and caudal cervical nerve
points near C6 as well as C7 bilaterally.
11/20/2017: Since Kona had shown to be quite accepting of acupuncture, I decided to
add on electroacupuncture with this session and moved to uncoated needles (0.20mm, 30mm
Hwato needles). I used the ITO ES-130 and connected BL22 to BL25 on the left and BL22 to
BL25 on the right. I manually alternated between ~1.4 and ~180 Hz several times during the 10
minute treatment. Intensity was at about 3 for both channels based on Kona’s response. I also
used dry needling at BL23 and BL24 bilaterally during the electroacupuncture.
For the stifle I chose SP9, SP10, ST24 and ST36 on the right hind leg. I would have
prefered to treat both stifles, but patient prefered to stand and lean her left side against her owner
during treatment. I suspect this is due to her desire to un-weight the right stifle.
At each session, following needle removal, basic massage techniques (effleurage and
petrissage particularly) were performed to help relax her muscles and also assess for any changes
from her pre-needling myofascial exam. The fascial restriction seemed significantly improved by
the end of each session.

Outcomes, Discussions, and References :
I have several ideas for Kona’s treatment going forward. I plan to perform
electroacupuncture to her stifles (SP9 to SP10 and ST34 to ST36). I would like to continue to
treat inner and outer bladder line points based on the myofascial exam each time but generally
including points cranial and caudal to her hemilaminectomy site (T9-T10) with
electroacupuncture. I plan to follow every acupuncture session with massage techniques to help
relax the muscles and assess changes that have taken place. I also believe Kona could benefit
from laser therapy. However with her history of MCT and several not yet tested skin masses, I
would be very hesitant to use this modality with her (and also do not have access to a laser).
Kona still walks with a pacing gait. I suspect that even if we can significantly reduce her
back pain, the gait will not change significantly without gait retraining with physical therapy.
Follow up therapy could involve Calvaletti training or other gait training methods.
Overall, I feel Kona’s response to acupuncture and electroacupuncture has been quite
favorable. Due to the long-standing nature of her issues, I was not expecting to see a significant
change, especially after only a few sessions. I am delighted that she is sleeping better and more
enthusiastic about walks. I am grateful that she allowed me the opportunity to work on
improving my technique.
Acupunct Med. 2016 Aug;34(4):290-5. doi: 10.1136/acupmed-2015-010949. Epub 2016 Jan 25.
Electroacupuncture protects against articular cartilage erosion by inhibiting mitogen-activated
protein kinases in a rat model of osteoarthritis.