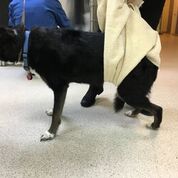 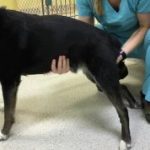 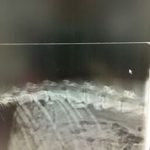 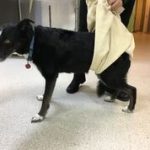 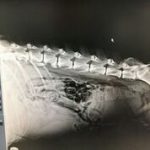 Abstract: “Chance”, a ten year old mixed breed, had an acute case of hind limb paralysis with no previous history of neurological issues. He presented with moderate to severe hindlimb paralysis of two days duration. Aggressive therapy included corticosteroid injection, muscle relaxers, acupuncture, electro acupuncture and physical rehabilitation. After three days of hospitalization, he was released with out patient therapy and a follow up with acupuncture. Within three weeks, Chance was able to be pain free and walking fairly normal with mild conscious proprioception deficits.

History and Presentation: “Chance”, a ten-year-old mixed breed castrated male, presented with hind limb paralysis with a two day duration. Owners were gone for a couple weeks and dog sitter said he was active and possibly could have hurt himself three weeks previous to presentation but was housed in own home with fenced yard and no option of poisoning. Since owners have been back for a week, they described a progressively worsening condition of pain, paresis, and finally, paralysis of hind limbs. They were in contact with the rDVM for a few days per phone conversations and were given tramadol for pain relief. Upon notification of the problem, owners were able to bring the patient in as soon as possible.
At presentation at the clinic, Chance was unable to stand on hind legs, painting, crying, extremely uncomfortable, and very anxious. During the initial myofascial exam, the patient began to noticeably relax and slow his breathing.

Myofascial exam: moderate to severe tightness of the myofascia over the back beginning at T7-L5, heat over the thoracic lumbar junction, lateral musculature of the cervical spine had multiple taut bands and trigger points, latissimus dorsi muscle had taut bands bilaterally, abdominal muscles tight and painful.

Medical Decision Making: After a detailed discussion with the owners about a guarded prognosis due to severity and duration of spinal cord injury, I recommended medical acupuncture, electro acupuncture, medical massage, anti-inflammatories and physical rehabilitation. This physical medicine approach has been documented to help spinal cord injury. (see references) Surgery referral was discussed but decline by owner due to age of patient. Patient was hospitalized and acupuncture and massage the first day targeted anxiety, pain, inability to urinate, CP (conscious proprioception) deficits, anal tone, and gastrointestinal motility. These issues were targeted as the emergence issues of spinal cord injury (SCI) and sequelae to the initial injury. Electroacupuncture of the SCI area was done the following day along with reassessed issues which included peripheral nerve deficits, autonomic nervous system regulation, and urinary/defecation stimulation. A follow-up acupuncture appointment was done in three weeks. (note: ideally, I would have like to follow up weekly for four weeks but due to the fact I was a relief veterinarian, these treatments were the only ones I was able to accomplish)

Definitive (or Putative) Diagnosis (or Diagnoses): The toxicosis and neoplasia was able to be ruled out by the bloodwork, radiographs and history. The lack of history or presence of fever helped rule out the encephalitis and myeloencephalitis. After the myofascial exam and the lack of muscle involvement, ruled out the myelopathies and directed me to the neurological etiology. Chance had a spinal cord injury secondary to the trauma of the severe spondylosis of the vertebrae with possible intervertebral disc disease.

Acupuncture Treatments: (all needles are acuglide pro needles per Jess Rychel recommendation)
First treatment (day 0) included points for agitation, autonomic nervous system support, central nervous system and peripheral nervous deficits. GV20 (agitation) and GV14 (autonomic and neck/back pain) were both done with 0.16x13mm needles. The rest of the points were done with 0.18x25mm. BL18, BL23, and BL 25 were selected as the local back points that were in front of (mid-thoracic spinal nerves) and behind (mid lumbar spinal nerves) of perceived spinal cord lesion. I chose only 3 back points as this was the patients first acupuncture treatment and he was very nervous. BL23 also would help with genitourinary issues and pelvic pain. BL25 would also help with constipation seen on radiographs. BaiHui was used for a multiple of reasons which included, lumbosacral pain, pelvic limb dysfunction and pain and midcaudal lumbar spinal nerve activation. ST36 (left only as this is the only side dog allowed on first treatment) was included to stimulate gastric motility and pelvic limb dysfunction. Bafengs were all used to encourage stimulation of conscious proprioception. BL40 was added to stimulate tibial nerve to help with hind limb paresis and urinary retention. GVT was added to help stimulate the caudal spinal nerves and reinforce anal tone.
Second treatment (day 1) points from day before were all used again with only changing the 0.18x25mm to 0.22×25 on the Bladder Line and keeping the 0.18x25mm on the rest of the peripheral points. The governor vessel points were stimulated with 0.16x13mm. Additional points were BL17 (cranial to lesion and palpable back pain at that area on myofascial exam the second day), BL21 (increase appetite (patient didn’t eat well the night before) and stimulate the thoracolumbar spinal nerves) and BL27 (stimulate sacral 1 nerve to help with sacroiliac dysfunction). GVT was not used the second day since anal tone was normal. Electrostimulation was done on BL17 and BL23 for ten minutes at low (2Hz) frequency (ito machine). Medical massage included trigger point release in neck, myofascial rolling and release in thoracolumbar and sacroiliac regions, massage over both stifle and popliteal areas to stimulate both fibular and tibial nerve to help with conscious proprioceptive deficits. Physical therapy was initiated with assisted walking, placing feet, massage and stretching hind limbs.
Third treatment (Three weeks late Day 21) Myofascial exam showed no pain over back area, mild ataxia and conscious proprioceptive deficits on hind limbs. Acupuncture treatment included GV20 and GV14 (0.16x25mm needles for above reasons since he is high strung normally), BL18, BL23, and BL25 (following reasoning from first treatment, 0.22x25mm needles) and BaiHui (0.22x25mm needles for same reason of first and second treatment). Electrostimulation of BL18 and BL25 was done at a low (2Hz) frequency for 10 minutes (ito machine). Bafengs were tried to be dry needled and patient refused so massage was done to those points.

Outcomes, Discussions, and References: Despite the challenge of the case being seen by rDVM between treatments and addition of multiple medications to my protocol (including high doses of tramadol and very high doses of prednisone (I had him at a lower protocol) and removing the physical therapy component of treatment for two weeks (only walking to urinate and strict cage rest), the patient responded well to acupuncture, medical massage and physical therapy. He was in my care the first three days and responded well to electroacupuncture and corticosteroids which was supported by Yang’s article in Journal of Veterinary Science 2003; 4:97-101 “Effects of electroacupuncture on experimental spinal cord injury in dogs.” After the first treatment and no medication on board, he was able to defecate and urinate on his own, anal tone returned, back pain improved, hind limbs had gained movement ability. After the second treatment which included electrostimulation, his symptoms had greatly improved and corticosteroids were added to the protocol. I believe that if I had been in charge of his care for the following two weeks, his improvement would have been quicker but his response made many skeptics believers in medical acupuncture. Protocols of physical medicine were utilized from N. Robinson and S. Sheet’s book “Canine Medical Massage” 2015. P 104-106. I was able to utilize all the techniques listed in this book and was able to give instructions to the owners to continue this therapy at home.
Articles by N. Robinson including “Non-Surgical Options for IVDD? Keeping Hope, and Dogs, Alive”, “An Emerging Standard of Care for TL IVDD”, “Acupuncture for Neurologic Recovery”, and “Got a Spinal Cord Injury? Get Acupuncture” from Veterinary Practice News all supported the rationale and techniques utilized in this patient. These articles were backed by numerous scientific articles on acupuncture and spinal cord injury.