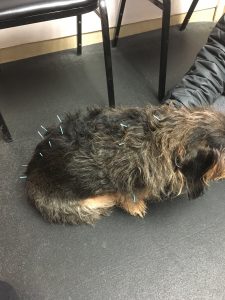 ABSTRACT
Cooper Buckley, a seven year old neutered male dachshund mix, presented to Integrative Pet Care of Homer Glen (IPC) early December 2017 with pelvic limb paresis. Symptoms were suspected to be secondary to intervertebral disc disease (IVDD). The owners were seeking medical management with physical medicine over surgical management. Cooper had experienced one previous episode of paralysis in 2016 which was treated surgically followed by a rehabilitation program at IPC.

Cooper has now begun a new program, starting with acupuncture, laser therapy, and prednisone taper, and has responded well thus far to medical management for recurrent IVDD. He has become independently mobile fairly quickly, (within just two weeks) and will be incorporating hydrotherapy and therapeutic exercises as his rehabilitation plan progresses.

HISTORY PRESENTATION
7/2016-10/2016: Cooper’s owners returned home to find him acutely non-ambulatory in the pelvic limbs. His referring veterinarian found the absence of motor and deep pain, so Cooper was sent to the local specialty center for neurology consultation. Intervertebral disc disease was diagnosed via MRI and Cooper underwent immediate right-sided T13-L2 hemilaminectomy. One week post-operative, Cooper was evaluated at Integrative Pet Care and began an extensive rehabilitation program which included acupuncture, neuromuscular electrical stimulation, manual therapy, hydrotherapy, and therapeutic exercises. During this initial eight week program, Cooper regained independent mobility, albeit with lingering mild ataxia, and entered a maintenance program that was to include exercise sessions, underwater treadmill sessions, and acupuncture. However, over time, the maintenance visits became exceedingly further apart and irregular.

12/7/2017: Cooper was seen by his referring veterinarian with the chief complaint of recurrent pelvic limb paresis. This most recent episode occurred with a somewhat gradual, progressive onset which began with weakness in the rear limbs progressing to mild ataxia. There was no known associated trauma. Cooper began a course of prednisone and returned to Integrative Pet Care for a new rehabilitation program.

PHYSICAL EXAMINATION AND CLINICAL ASSESSMENTS
12/16/2017:
Subjectively, Cooper was quiet, alert, responsive, and seemingly depressed. He was non-ambulatory in the pelvic limbs and his owner was carrying him.

Myofascial examination revealed tenderness and tension over length of thoracic and lumbar paraspinal muscles as well as tension over bilateral shoulders, triceps, and latissimus dorsi. Cooper vocalized upon gentle palpation over T11-T12 and T12-T13 and trigger points were detected along right longissimus and ileocostalis musculature of this region. Decreased muscle tone was palpated over bilateral semimembranosus, semitendinosus, and gracilis muscles.

Neurologic examination revealed ataxia and dragging of the pelvic limbs with negative conscious proprioception of bilateral pelvic limbs. He had diminished panniculus reflex to the level of L2 on the right and L4 on the left. Positive crossed extensor reflex in right lateral and equivocal crossed extensor reflex in left lateral was detected and repeatable. Weak motor function was present, as Cooper would attempt weak excursions of pelvic limbs when held in standing and tail gently manipulated.

MEDICAL DECISION MAKING
The acupuncture protocol selected for Cooper was formulated with the intention of stimulating afferent spinal nerves in the regions of tenderness along his spine, in particular cranial and distal to the thoracolumbar junction. Paraspinal muscle trigger points detected upon myofascial examination would also be addressed. Parasympathomimetic points were similarly considered as part of the effort to neuromodulate to reduce sympathetic tone. Finally, distal points over the pelvic limbs were considered to stimulate nerve signal transmission along long nerve tracts.

DEFINITIVE DIAGNOSIS
Definitive diagnosis is presumed, although not confirmed, to be IVDD in this case based on current symptoms and previous confirmed diagnosis on MRI. Further work-up with advanced imaging would be needed for absolute confirmation of diagnosis and localization of lesion(s).

ACUPUNCTURE TREATMENTS
For Cooper’s first acupuncture session, GV 20 was chosen first as a known point for anxiety and also for parasympathomimetic effects. GV 14 and Bai Hui were used next to stimulate cervicothoracic and lumbosacral spinal nerves, respectively, near intumesscences. These points are also known for their parasympathomimetic effects. Next, bladder points were chosen based on myofascial and neurologic examination referenced above. Bladder 14, 19, 23, and 28 were used. ST 36 was also chosen as it has been shown to have many benefits ranging from stimulation of the fibular nerve and relevant spinal cord segments to its parasympathomimetic effects to neuromodulate overriding sympathetic tone seen with spinal cord disease. Dry-needling was used during this initial session as Cooper was already very reactive to needles along bladder channels.

Cooper then had a second and third acupuncture session with a colleague where electroacupuncture was used from GV14 to Bai Hui and from BL23 to BL 27 as well as from BL 54 to KI3 bilaterally to achieve a higher degree of neurologic stimulation.

By Cooper’s fourth acupuncture session, he was able to come to standing on his own using his left pelvic limb and demonstrated return of a delayed conscious proprioception reflex of the left pelvic limb. Conscious proprioception of the right pelvic limb remained negative. Cooper’s exam revealed mild to moderate tension over and around the thoracolumbar junction and he was mildly kyphotic. Electroacupuncture leads were placed from GV 14 to Bai Wei for the benefit of electrical stimulation of nervous system pathways along the spinal cord. Leads were also placed from BL 20-BL 25 for benefit of stimulating along the bladder channel and spinal nerve segments. BL 23 was chosen for trigger point release bilaterally as well. ST 36 was chosen for reasons referenced above. At this visit, Bafeng points were also chosen for the benefit of stimulating distal points of the affected limbs to modulate pathways to lumbar intumescence. Laser therapy with class IV was also administered at this session.

Cooper continued to have acupuncture sessions every 2-3 days for a total of 10 sessions over a month time frame. Similar points were used at each visit. Class IV laser was used with each session moving forward, as well.

OUTCOMES, DISCUSSIONS, and REFERENCES
The outcome for Cooper’s case, thus far, has been remarkable. Within the first 10 days of treatment including laser and acupuncture sessions, Cooper was once again able to stand and bear weight with his pelvic limbs. With consecutive sessions and within a month, Cooper regained proprioception and use of the hind limbs for independent ambulation. Kyphosis of the thoracolumbar spine resolved and pain and trigger points palpated along his paraspinal muscles dissipated. Quantitatively, weight bearing of the pelvic limbs improved from 0% at his initial evaluation to 13% and 14% of the left pelvic limb and right pelvic limb, respectively, on the stance analyzer. Conscious proprioception was initially absent and improved to delayed bilaterally, with the left side showing a higher degree of improvement than the right. Panniculus reflex was initially noted as absent below the level of L2 which improved to normal by the 4-week recheck.

Cooper’s owners, when faced with the recurrence of his pelvic limb paresis, had the choice to take him back to his neurologist for surgery versus attempting medical management with acupuncture and related techniques versus 8 weeks of cage rest that an internet group had advised for him. The timeline of Cooper’s recovery was likely due to a combination of acupuncture and physical medicine. The owners noted that Cooper’s mood did, in fact, improve once he restarted regular sessions. In addition, acupuncture not only stimulated his nervous system, but needling resolved tension and trigger points along his paraspinal muscles as well. The later result was immediately obvious upon post-session myofascial examination. Laser therapy, based on clinical studies, was used to reduce inflammation, treat pain, and accelerate the rate of tissue repair. As Cooper’s pain and discomfort resolved, he was increasing willing to attempt ambulation and allow the owners to work on stimulation of feet and weight shifting exercises at home. More than likely, strict “cage rest” would have resulted in depression as well as decreased spinal mobility and shortened, tight muscles from disuse. With the known side effects of cage rest, Cooper’s recovery would have likely taken significantly longer and he may have never recovered with the current quality that he is demonstrating.

Current research and data showing the benefits of acupuncture for spinal cord injury is very promising. A Review of Allopathic and Chinese Medicine Literature, by Dorsher and McIntosh in 2015, revealed that “there is evidence that use of electroacupuncture in acute SCI may significantly improve long-term neurologic recovery from these injuries both in terms of motor, sensory and bowel/bladder function with essentially no risk”. The authors also concluded that acupuncture may help individuals with chronic pain secondary to chronic SCI. Similarly, in a study published in 2010 by Joquin et al of 40 dogs with thoracolumbar IVDD entitled Comparison of decompressive surgery, electroacupuncture, and decompressive surgery followed by electroacupuncture for the treatment of dogs with intervertebral disk disease with long-standing severe neurologic deficits concluded that “EA (electroacupuncture) was more effective than DSX (decompressive surgery) for recovery of ambulation and improvement in neurologic deficits in dogs with long-standing severe deficits attributable to thoracolumbar IVDD.”