History and Presentation
Since June of 2016, the owners have noticed that Tucker is intermittently lame on the right
pelvic limb. While walking, he treads more lightly on the right pelvic limb, and when standing
he shifts weight away from the right pelvic limb. In June of 2016, he was given a course of
Rimadyl, which improved the lameness. He was also started on a joint supplement (BioFlex
Ultra). Tucker continues to intermittently display lameness of the right pelvic limb, but is still
active, going on 20-30 minute walks twice daily. Tucker does not slip out on the hardwood floors
in the home, nor does he have any trouble getting up from sitting/laying down. He does not have
any issues with the short flight of stairs in the home. Tucker does not have any previous illness
or known injuries and has not any surgeries other than a neuter when he was a puppy.

Physical Examination Overall findings:
-Vital signs: T: 100.8 F P: 100 bpm R: Pant
-General findings: Lenticular sclerosis OU, moderate dental calculus, sebaceous cyst on left hip
-Gait: Ambulatory x4 with mild weight-bearing lameness of the right pelvic limb. While
walking, pivots pelvic limbs (right > left), has a narrow base in the pelvic limb, and sways torso
from side to side.
-Posture: While standing, shifts weight away from right pelvic limb toward left pelvic limbs.
Bowed posture in pelvic limbs bilaterally. Hyperextension of tarsi bilaterally. Tucker sits with
the right pelvic limb extended out to side with weight shifted to the left side.
-Orthopedic findings: Mild atrophy of right hamstring muscles. Moderate crepitus detected on
flexion of right stifle. Painful on extension of right stifle and right hip. Patellas sit normally
within the trochlear grooves, but can be medially dislocated with manipulation. No cranial
drawer, cranial tibial thrust, or medial buttress detected bilaterally. Both hips subluxate when
manipulated in a standing position (while shifting weight from one side to the other) and when
laying down (positive Ortolani test).
-Myofascial examination:
• Neck: Heat detected over dorsal surface of neck.
• Thoracic limbs: Trigger points bilaterally in the pectoralis muscles, triceps• Neck: Heat detected over dorsal surface of neck.
• Thoracic limbs: Trigger points bilaterally in the pectoralis muscles, triceps (right more
sensitive than left), and latissimus dorsi muscles. No restrictions in range of motion of
joints.
• Spine: Trigger points in paraspinal muscles extending from mid-thoracic to mid-lumbar
spine. Fascial restriction detected along this area as well.
• Pelvic limbs: Taut bands and trigger points on palpation of adductors. When palpating
left adductor, Tucker’s eyes widened, he began licking his lips, and there was trembling
of the leg.
-Neurological examination: Bright, alert, and responsive. Normal PLRs and menace response,
normal facial sensation and symmetry. Normal conscious proprioception x 4. Normal withdrawal
reflexes x 4 and normal patellar reflexes x4.
Diagnostic testing:
-Complete blood cell count (mild eosinopenia), serum chemistry (normal)
-Right stifle and bilateral hip radiographs: evidence of mild bilateral degenerative joint disease of
the coxofemoral joints (mild new periarticular bone formation at junction of femoral head and
neck bilaterally) with thickening of the right femoral neck and mild flattening of the right
femoral head relative to the left. Right coxofemoral joint appears mildly subluxated. Evidence of
moderate degenerative joint disease of the right stifle (moderate periarticular bone formation
along the trochlea of the right femur and along the condylar area of the right tibia). Mild decrease
in the width of the right thigh musculature relative to the left.
Updated Assessments:
-Throughout subsequent evaluations, the area of trigger points along the paraspinal musculature
steadily reduced in size. Trigger points were initially detected from mid-thoracic to mid-lumbar
spine, then were detected from mid-thoracic to thoracolumbar junction, then were detected solely
at the thoracolumbar junction. At last evaluation, no trigger points were detected along the spine.
-On subsequent evaluations, there was still some taut bands detectable in the adductors, but
Tucker was significantly less painful and reactive to palpation of the areas.
-On subsequent evaluations, there was improved weight bearing on the right pelvic limb, though
Tucker would often still kick out the right pelvic limb when sitting. 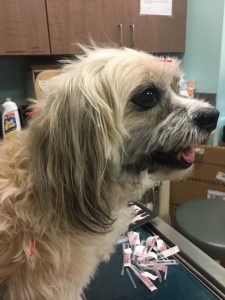 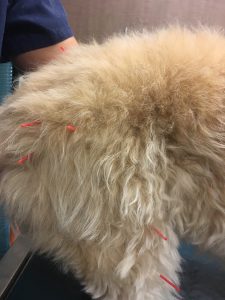 Medical Acupuncture
Points selected:
• GV 20 (autonomic): selected for autonomic neuromodulation through cross-talk with the
vagus nerve, with the goal of reducing agitation.
• Bilateral SI 11 (myofascial): selected to address myofascial dysfunction in thoracic
limbs, along with local points in the triceps and latissimus dorsi muscles.
• GV 14 (autonomic, myofascial): selected for its anti-inflammatory properties and to
address myofascial dysfunction in thoracic limbs, along with massage of trigger points in
the triceps.
• Bilateral inner bladder line (myofascial, central)—bilateral BL 10, BL 11, BL 18, BL
23, BL 25—selected to address myofascial dysfunction in the paraspinal muscles. BL 25
were also selected to modulate the central nervous system in the caudal lumbar spine.
• Bai Hui (autonomic, central): selected due to its proximity to the lumbosacral plexus and
to modulate the central nervous system in the caudal lumbar spine.
• Bilateral GB 29, GB 30, BL 54 (peripheral): selected because they make up the hip
triad. GB 29 and GB 30 have a rich relationship with the muscles in this area and BL 54
is associated with the sciatic nerve, which supplies innervation to pelvic limb.
• Bilateral GB 34 (peripheral): selected because it is a highly innervated area and has
beneficial effects on stifle pain.
• Right ST 34 (peripheral) and ST 36 (autonomic, peripheral): selected as points proximal
and distal to the injured joint. ST 34 was selected to optimize firing patterns to
proprioceptors and mechanoreceptors. ST 36 was selected for its widespread
parasympathomimetic effects, with the goal of reducing inflammation and sympathetic
tone. It was also selected to improve circulation and stimulate the groups of
mechanoreceptors in the area.
• Bilateral BL 40 (peripheral): selected as a master point for the back and hips.
• Bilateral BL 60 (peripheral): selected as distal point to integrate proprioception and
motor control by neuromodulating the tibial and fibular nerves far down on the foot.
Method of stimulation: dry needling for 12-15 minutes per session.
Needle type: Length= 30 mm, Gauge= 0.16, Manufacturer: Seirin.
Number of treatments: 5, Frequency of treatments: weekly.
Related Techniques
-Laser therapy: applied over the hips, right stifle, and mid-thoracic to mid-lumbar spine
• Manufacturer: Cutting Edge Laser Technologies, Class IV laser
• Power: 1.1 W and 25 W
• Wavelengths: MLS uses 808 nm and 905 nm wavelengths simultaneously to overcome
the limits of traditional laser therapy. The 808 nm wavelength is delivered via continuous
wave and provides anti-inflammatory effects and the 905 nm wavelength is delivered via
pulsed mode laser energy and provides immediate analgesic effects.
• Frequency setting: 292 Hz. Time: 2.5 minutes per site.
-Massage: Passive touched utilized to calm Tucker and increase blood flow to the tissues.
Petrissage and skin rolling used along the paraspinal area to lift the tissue and un-adhere the
fascial restriction. Compression and friction used over the adductors to spread the muscle fibers
apart and loosen the tight muscles. Compression used over the pectoral muscles. Friction used
over the triceps and muscles overlying scapula.

Tucker Anderson After Video
Outcome and Discussion
While several aspects of Tucker’s gait remained unchanged (e.g. pivoting while walking,
swaying torso side to side), there was quickly an appreciable improvement in overt lameness of
the right pelvic limb. Throughout treatment, there was appreciable improvement in weight
bearing on the right pelvic limb both while ambulating and while stationary. Tucker does
continue to sit with his right pelvic limb kicked out to the side. Though there was consistently
crepitus detected on flexion of the right stifle, there was noticeable improvement in comfort level
on extension of both the right hip and stifle. Immediately following each acupuncture session,
trigger points were no longer detectable along the spine, and at each subsequent evaluation, there
were fewer trigger points identified along the paraspinal muscles. The addition of massage to the
treatment plan was helpful at reducing trigger points along the pectoralis muscles and reducing
tightness and sensitivity in the adductor muscles. Acupuncture was deemed too sensitive to
perform along the adductors, so the massage was crucial in loosening the tight muscles. Overall,
I was pleased with Tucker’s response to therapy. While I think NSAIDs are a helpful
pharmacological tool for managing pain and inflammation secondary to osteoarthritis, I was
happy that I could manage Tucker’s discomfort without having to incorporate a medication that
could potentially have adverse effects on his gastrointestinal tract.
The frequency and number of treatments performed in this case study were chosen based upon
the results of the JAVMA study, Owner assessment of chronic pain intensity and results of gait
analysis of dogs with hip dysplasia treated with acupuncture. Though the authors did not find a
significant difference in outcomes between acupuncture, carprofen, and placebo capsules,
acupuncture did reduce the degree of subjectively evaluated lameness and was associated with a
decrease in validated chronic pain scores. Based upon my evaluations and the owner’s
perception, I feel that my results with Tucker were consistent with this study’s findings. If
available at our practice in the future, it would be interesting to follow up with stem cells injected
into the acupuncture points, as discussed in the Stem Cells International study, Acupoint
Injection of Autologous Stromal Vascular Fraction and Allogeneic Adipose-Derived Stem Cells
to Treat Hip Dysplasia in Dogs.