Hip Dysplasia and DJD in a 10 Year Old Maine Coon 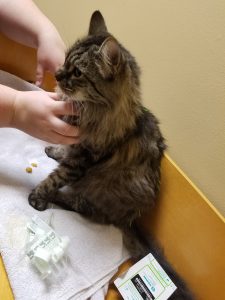 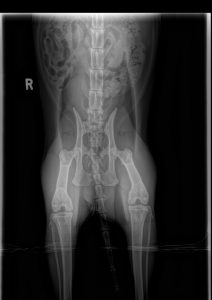 Abstract:
The purpose of this report and treatment series was to assess response to acupuncture for hindlimb degenerative changes, and, as a secondary goal, upper respiratory infections (URI). Additionally, how to make the environment more acceptable for acupuncture for a nervous feline
and to optimize the point choices that he would tolerate a longer session with more impactful points was addressed.

Hindlimb lameness showed improvement, as noted by change in jumping habits demonstrated by less hesitation and higher heights, reduction in self-barbering, and increased comfort in certain positions. No significant change in resolution of URI symptoms when compared to baseline, but improved toleration of treatment was noted.

History:
Larry is a 10-year-old neutered male Maine Coon who presented for evaluation of hindlimb lameness which has been progressing over the last two years. Owners note that he preferably lays on his left side. He is not able or willing to jump as high vertical distances as he once did. Additionally, he hesitates more prior to any jump. Most recently, he has begun barbering the hair on his pelvic limbs, which is a different pattern than seen with atopy that he has historically experienced. His activity level is decreasing with time as owner notes less enthusiasm over his favorite toys. He is still using the litterbox but has stopped covering his feces over the last three years. He is not on any supplements or medications for his orthopedic issues.
Larry was adopted as a young adult following a short stint as a free-roaming cat. He is an only cat in the household and is now strictly indoors. His medical history includes anaphylactic reaction to feline leukemia virus vaccination. He has a II-III/VI parasternal cardiac murmur first noted at four years of age, stable since first detected. Recent cardiac echocardiography showed early hypertrophic cardiomyopathy; medications are not indicated at this point. He has a history of a subcutaneous fibrosarcoma on his ventral thorax that was completely excised but with poor margins. Larry also suffers from chronic upper respiratory infections, primarily manifesting as sneezing and mild ocular discharge. Finally, Larry has atopy, demonstrated by generalized
pruritus. This is currently controlled by a limited ingredient diet and chlorpheniramine daily. Recent bloodwork shows no abnormalities. Radiographs showed mild degenerative changes of bilateral hips but no other significant abnormalities.

Diagnoses: Chronic degenerative change was my primary differential. This fits with the radiographic findings of hip dysplasia with degenerative joint disease.

Conclusions:
Larry demonstrated improvement in his pelvic limb pain. His placement deficit remained but did seem subjectively improved. Since the only other change was the heated bed, it can be inferred that the bulk of improvement was due to acupuncture. The owner noted improved jumping ability with less hesitation and greater heights. She also noted less self-mutilation of the pelvic limbs. Additionally, in the first session, Larry appeared guarded on his left side. Following the first session and the perceived benefit, he favored needling of his left hip joint. His upper respiratory infection did not seem to improve quicker than baseline. However, I do believe the fact that he did not tolerate needling of numerous respiratory points contributed to his lack of response. At his next flare, I will try again or implement owner massaging acupressure points. If laser is available at that point, we will implement that. His cardiac issues remained stable, but this was not a focus of his therapy given he has very mild changes at this point. His allergic dermatitis did not flare during the treatment period. However, at his next seasonal flare, acupuncture will be added to his treatments to assess the response to this. Given Larry’s variable accepting of acupuncture, he would have benefited from a more quiet/stable environment (we could not control for barking dogs, people speaking, etc.). Additionally, I believe he would have benefited significantly from laser therapy and massage in addition to the acupuncture. However, I did not have access to a laser at the time of his therapies. Once this is an option, we will pursue this treatment for him. Electrotherapy has helped in other causes for similar issues. This will be a future treatment option for him if we can control the environment to allow him to stay calm long enough to tolerate a treatment.

Larry presented primarily for his hindlimb orthopedic issues due to his decreased jumping ability and intermittent fur-barbering. We briefly delved into his respiratory issues but did not address his allergic dermatitis. In future sessions, we will work on overall health for his immune system and his pruritus/allergic issues to see if we can reduce his dosage of chlorpheniramine. Additionally, continued support of his hindlimb changes as well as
introduction of a more holistic approach including supplements and rehabilitation exercises will help improve function. Overall, he demonstrated improvement noted by his owner in orthopedic issues and will continue to receive maintenance acupuncture at minimum.