Abstract: Bobo is a male neutered Corgi presented for back pain and pelvic limb ataxia. Bobo was treated with acupuncture and showed improved comfort in his spine, but limited improvement in his neurological deficits.

History and Presentation:
Bobo is a 14-year-old male neutered Welsh Corgi farm dog with a history of back arthritis that has been slowly progressive. In the past few months, he has developed ataxia in his pelvic limbs. Years ago, radiographs of his spine revealed significant arthritis in his back according to the owner. He has been on Galliprant 60 mg once daily, with little improvement in his comfort. At home, Bobo prefers to lay down against the wall or other solid objects to push off of when standing. He no longer jumps in the owner’s golf cart and has had worsening ataxia in his pelvic limbs. The owner has noted sores on the dorsal aspect of both hind feet from dragging his toes. His owner is reluctant to take him to the vet for further evaluation due to his severe anxiety and aggressive behavior in the clinic setting. For this reason, the owner has not sought further diagnostics and is hesitant to use medications that would require regular bloodwork.

Physical Examination and Clinical Assessments:
Bobo’s physical exam was within normal limits. No overt lameness is present with normal range of motion in both thoracic and pelvic limbs. On neurological exam, he showed moderate ataxia in the pelvic limbs. There was prominent delayed conscious proprioception (CP) bilaterally with the left worse than the right. His nails and dorsal aspects of his digits were callused from scraping on the ground in both pelvic limbs. Thoracic limbs appeared neurologically appropriate. Sciatic, patellar, and biceps reflexes were normal bilaterally. Bobo’s myofascial exam revealed myofascial restriction, pain, and flattened hair coat on his dorsal spine from his eighth thoracic vertebra 8 (T8-L5) to his fifth lumbar vertebra. There was some decrease in the span of thoracolumbar (TL) pain after treatment. He also tends to be sore in his triceps muscles and quadriceps muscles bilaterally.

Medical Decision Making:
Bobo’s treatment was focused on reducing pain and inflammation in his thoracolumbar (TL) spine. Electrical stimulation at a low frequency (2Hz) was used to stimulate dorsal roots in his TL spine for reduction of inflammation and inhibition of neuropathic pain. When tolerated, points on the pelvic limbs were placed to stimulate mechanoreceptors, promote axon regrowth, and therefore improve conscious proprioception (CP). Bladder and stomach line
points were used to stimulate tibial, fibular, and femoral nerves. Additionally, points were placed to relieve myofascial strain patterns in the triceps and quadriceps muscles.

Definitive (or Putative) Diagnosis (or Diagnoses):
The chronicity of Bobo’s ataxia and back pain indicates a chronic condition such as thoracolumbar osteoarthritis with additional myofascial restriction. Disc disease, neoplasia, and degenerative myelopathy remain a possibility and can only be ruled out with additional diagnostic imaging. Additional imaging was not sought due to his behavior. Acute on chronic disc disease could account for the sudden increased severity of the ataxia, but you would expect progression of ataxia in the short-term. FCE is unlikely since it was not a sudden onset and there has been minimal improvement in his neurological state. Even though multiple differentials cannot be ruled out, all possibilities would have similar treatment plans regardless of the
definitive diagnosis. 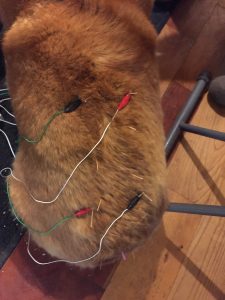 IMG_6168.TRIM
Outcomes, Discussions, and References:
Bobo had experienced thoracolumbar pain for years in addition to the slow worsening of his ataxia. After his first acupuncture treatment, he was noticeably less sensitive to palpation of his back. In the evenings after his treatment, he would become very lethargic and would have worsening of his ataxia. Typically, after 12-24 hours he would be back to himself and seemed to the owner to be more comfortable. Before acupuncture, he would lay next to a wall or chair and lay on his right side to use his right hind leg to leverage himself up. After the second treatment, the owner noticed that he would tend to lay more in the middle of the room and was starting to jump in to the golf cart that he previously required help. His owner noted after the third and fourth treatment that he seemed to have more energy. The ataxia remained present with no change in his conscious proprioception. At each exam he continues to be painful in his T-L spine with incremental improvement. After the fourth treatment Bobo was started on Traumeel (T-relief) that aided in his improved overall comfort. However, it has not been enough as Bobo continues to require weekly acupuncture sessions for pain relief. An attempt was made to extend the interval between treatments and the owner noted that after 7-8 days he would start to act uncomfortable and lethargic again.