Osteoarthritis in a 12 Year Old Collie

Abstract:
Below is a case report discussing the use of medical acupuncture and electroacupuncture to treat spinal osteoarthritis with a neurologic component in a 12 year old, MN Collie. Acupuncture treatments were based on radiographic findings, myofascial and neurologic examinations. Electroacupuncture (Patheon unit) and dry needling techniques were used in addition to typical acupuncture needling techniques. The success of treatment was based on owner reported results as well as the change in serial myofascial and neurologic examinations. The results reported by the owner were positive with an increase in activity and overall comfort. The myofascial exam improved steadily. There was no change in the neurologic exam.

History and Presentation:
Jake, a MN 12 year old Collie, presented in the August of 2017 on second opinion for recurrent superficial pyoderma and a mildly elevated ALT. His owner also complained that his rear limbs seemed to “splay out” frequently and that he was weak in the rear limbs. He had significant difficult rising, with stairs, and on slippery surfaces. His ALT increased after he was started on Rimadyl by his previous veterinarian (around 2-3 months prior). The owner wanted to avoid the use of NSAID’s given this change and was very concerned about his liver health. An abdominal ultrasound was performed to rule out any significant issues with his liver, spleen, etc. The results were suggestive of mild inflammatory changes to his liver, mild cystitis, and a slightly enlarged prostate. I referred him to our rehabilitation facility for a consult with the rehabilitation veterinarian. Radiographs were taken at this time. (See imaging below). Water therapy, laser, and additional exercised were instituted. After a few sessions in the underwater treadmill the owner felt Jake was getting worse rather than better and discontinued the therapy. She continued with laser therapy but as October approached she felt the laser was not helping and noted that he was declining. She elected to discontinue laser therapy but was willing to try acupuncture which had not yet been done. On November 14, I saw Jake for his initial acupuncture visit. The owner
reported that he was lying on the floor to eat, barking to be helped down the two steps off the deck, unable to rise on his own, and overall reluctant to move.
In regard to Jake’s pyoderma he responded well to just topical therapy until September when his infection worsened. A culture and sensitivity of his skin revealed MRSI. The infection has been successfully managed with the appropriate topical and systemic antibiotic therapy.
Previous Medications: Rimadyl, Doxycycline, Cephalexin, Mupirocin
Current Medications: Gabapentin, Denamarin, Dasiquin, Fish Oil.
Previous Imaging:
Lumbar Spinal Radiographs: bridging spondylosis from L2-L3-L4-L5-L7-S; bridging spondylosis T5-T6; cervical or cranial thoracic spinal images not taken.

Medical Decision Making:
The main goal for Jake was to decrease his pain, improve his daily function specifically his ability to rise more easily, stand while eating, and make the choice to be more active. Considering his exam findings and radiographs there is evidence that he has pain from osteoarthritis (bridging spondylosis) and neurologic disease (ataxia, positive crossed extensor)
likely stemming from a cord lesion between C6 and L5. His myofascial exam points to most of his pain stemming from between T13 and L5. Thus, I focused my acupuncture plan as follows:
1. Release myofascial tension, deactivate trigger points, stimulate blood flow, endogenous
opioid release and anti-inflammatory activity. 2. Stimulate peripheral nerves and related spinal segments to help improve damaged
neuro-communication seen clinically as ataxia and a positive crossed extensor reflex. 3. Use electroacupuncture as an augmentation tool for both 1 and 2. 4. Use autonomic points to overall calm and balance nervous system and encourage the
patient to enjoy the acupuncture treatment. 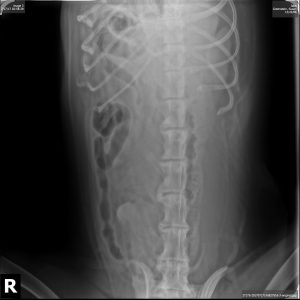 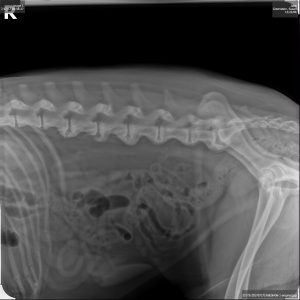 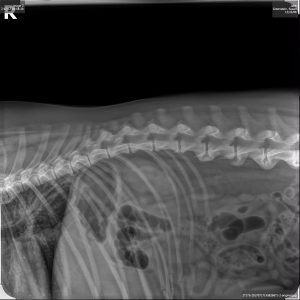 Acupuncture Treatments:
Acupuncture once a week was recommended as the owner lives far away and it is an ordeal for her to get Jake into the car. Our first session was focused on acclimating Jake to acupuncture and creating a positive experience. We did not use any electroacupunture at this time as we did not yet have the unit. Jake was relaxed and did very well with is first session. Jake tends to be most comfortable laying on his side so we have been alternating what side we focus on with each session. We added electroacupuncture after the first session and he tolerated it very well. We have done at total of 4 sessions and will continue with session every 10-14 days depending on owner’s schedule.
Needles: Seirin 0.20 x 30mm; Seirin 0.18 x 30 mm; Carbo 0.2 x 30 mm
Autonomic Points: GV20, Bai Hui, GV 4, ST 36, ST 34
Local Pain Points: BL 14-25, BL 60, KI 3, KI 1, BL 40, BL 54, GB 29, GB 30
Trigger Points: Guided by myofascial exam – dry needling.
Spinal Neuromodulatory Points: BL 14-25, BL 27, BL 28
Peripheral Neuromodulatory Points: BL 60, KI 3, KI 1, BL 40, ST 36, ST 34,
Electoacupuncture (Pantheon): Bladder 15 to 25 bilaterally at Mixed 2/100 between 1.5 and 2.

Outcomes, Discussion, References:
Jake case was a challenge as his owner felt that all previous therapies including water therapy and laser had made him worse not better thus was not hopeful at the start of treatment. After two acupuncture treatments his owner noted improvement. He picked up a toy to play with which he had not done for over a year. He was standing to eat his dinner and he was no longer barking to be helped down two steps off the deck. Subjectively this is improvement. His myofascial exam also improved over the last four sessions. His muscle tension decreased, he allowed deeper palpation than previously and the tremoring of his hind limbs with spinal palpation resolved. His crossed extension reflex on both hind limbs was still present. There were additional trigger points noted on follow up exams in the forelimbs suggesting he may have been a bit more active than previously (and compensating for his hind limb weakness). There were no adverse events. We are continuing sessions at 7-10 day intervals.
I was very pleased with Jake’s response as he had not responded to other therapies. His owner is also very happy. I chose this case for my report as I think it represents a perfect scenario for the use of medical acupuncture. Jake is an older dog with multiple issues many of which we cannot “cure” but medical acupuncture has been a tool to make his golden years more comfortable. I was moved when I heard that he was continuing to pick up toys to play as that says to me he is also happier!