Paraplegia and Bladder Dysfunction in a Guinea Pig

Abstract
This case report overviews an acupuncture and medication-based approach to treating paraplegia and upper motor neuron bladder dysfunction in a guinea pig. After multiple treatments and a course of non-steroidal anti-inflammatory medication the guinea pig was able to regain function of both hind limbs and was able to urinate normally.

History and Presentation
An approximately 4-year-old intact female American guinea pig presented for not using her hind legs. She lives in a large plastic bottomed cage with another guinea pig who is behaving normally. The substrate in the cage is pine shavings which are changed weekly or when they get very soiled. Their diet consists of guinea pig pellets, ad lib timothy hay, and fresh vegetables. Water is supplied via a sipper bottle and is changed when the water is empty. Neither guinea pig has ever been to the vet before and has not had any medical problems.

According to the owner the patient was completely normal the day before but when they woke up in the morning the owner’s daughter noticed that she was dragging her hind legs and seemed unable to use them. She was not eating, even her favorite greens. There was no prior medical history or any history of trauma. The only out of the ordinary happening was that the owner’s daughter had a birthday party the day before with lots of her friends and everyone was playing with the guinea pigs.

Definitive Diagnosis
Due to history of multiple children handling the guinea pigs the day prior to the presentation along with the finding of bladder dysfunction and hind limb paresis the likely diagnosis is traumatic spinal cord injury. The pain from the injury may be the cause of the ileus but there may also be nerve dysfunction present which would prevent proper peristalsis and emptying of the GI tract. A spinal cord injury also would not necessarily show up on radiographs and would require advanced imaging such as an MRI.

Medical Decision Making
The acupuncture approach was partially influenced due to the owner’s decision to euthanize the patient if no progress was made quickly and also financial limitations of the owner. The treatment was much more aggressive than would normally be done if more time was provided. Guinea pigs only have six lumbar vertebra and can have either thirteen or fourteen thoracic vertebrae and two or 3 sacral vertebrae.1 Based on radiographs the vertebral formula was found to be C7, T13, L6, S2. To compensate for this anatomic difference spinal segments were assumed to start one lumbar space behind that of dogs or cats.
The sciatic nerve arises from spinal nerves of L3 to around S2 and bladder innervation from L1 to S3. Detrusor sphincter reflex dyssynergia can be due overstimulation of the sympathetic nervous system which innervates the sphincter.2 The goal of treatment was to provide more parasympathetic impulses to the bladder to help relax the sphincter stimulate the nerves exiting the spinal cord from L1 to S3 to help “reconnect” the hind limbs to the cord, and also to provide analgesia. Guinea pigs tend to have catecholamine floods when stressed or in pain which contribute to ileus and can even increase mortality, so another goal of treatment is to increase parasympathetic tone and restore homeostasis. 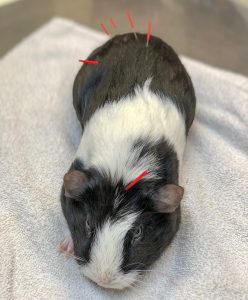 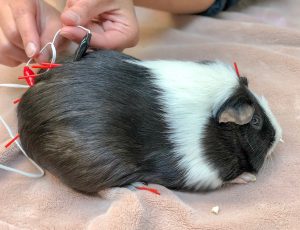 Acupuncture Treatment
The patient was started on Metacam 1.5 mg/ml (0.5 mg/kg PO Q24 hours) for 7 days.
Needles: Seirin No. 1(0.16) X15mm
Electrostimulator: Ito ES-130
The urinary bladder was gently expressed when full.
The very first treatment only used dry needling and few points to gauge patient response to treatment and get her used to the needles. The needles were left in for 5 minutes and then removed:
Point Reason3
GV 20 Parasympathetic stimulation
Bai Hui Parasympathetic stimulation, stimulation of sciatic and bladder nerves

Due to the very small space between BL 25, 27, 28 only BL 25 and BL 28 were selected. Each BL 25 was connected to the ipsilateral BL 28 and set to a frequency of 1.5 hz for one minute and then manually switched to 210 hz for one minute, alternating back and forth. The varying frequencies were done to prevent nerve acclimatization and to provide both fast acting and longer acting analgesia.4 BL 23 was connected to BL 54 and started at 1.5 hz but this appeared to cause discomfort and was discontinued. All of the bafeng points were manually stimulated during the electrostimulation. The patient was closely monitored throughout to ensure comfort, at one point the patient fell asleep. The above protocol was repeated for all of the remaining treatments which were done every eight hours.

Outcomes
After the first day of treatment the patient appeared more comfortable and was eating hay although still had to have her bladder expressed and was unable to use her legs, she was also producing normal fecal pellets indicating the ileus had resolved. On day three she was no longer dribbling urine and appeared able to urinate on her own. By day five she was able to move around her enclosure and her withdrawal response was much stronger. She could also keep her legs tucked in normal guinea pig posture. On day seven the withdrawal response appeared to be normal and she could actively move around her enclosure, her conscious proprioception was also normal in both limbs. Because she was urinating normally and was able to ambulate the owner elected to discontinue therapy and just monitor at home.

Discussion
Before learning acupuncture, the author could only provide euthanasia or offer specialist referral to small mammals with spinal cord injury. This case clearly demonstrates that acupuncture can provide excellent outcomes for animals with spinal cord or other nerve injuries and is a viable alternative to surgery. The speed with which the patient recovered is likely due to instituting therapy very early on, the aggressiveness of the therapy, and possibly because of the injury was not very severe. This calls for treating acupuncture as an equal to other medical modalities, not just something to be offered when there are no other options.