TMJ and Osteoarthritis in a 17 Year Old Quarter Horse

History & Presentation:
Lady is a 17 year old Quarter Horse mare owned by Nicole Pederson. She is used for pleasure riding, as a working cow horse and occasionally Nicole likes to run barrels with Lady. She had surgery to remove a bone chip from her right front carpus prior to Nicole purchasing her. She also sustained a laceration to the heel bulb on her left front hoof in 2017.

Nicole’s goal for this horse is to use her more in barrel racing competition. She is concerned about how her right front knee will handle an increased work load.
In April 2018, Lady presented to me for routing teeth float and her first acupuncture (AP) treatment.

Physical Exam & Clinical Assessment:
4-11-18: Lady was bright, alert and responsive. Her heart and lungs auscultated normal. Her gut sounds were normal and she was apparently healthy. Neurologic exam was normal.

She had some dental pain, reactive to ST 7, and had sharp points on her molars that corresponded to ulcers on her gums.

Motion palpation exam showed sensitivity over poll and muscles over her atlas and around her nucal ligament. She also had muscle sensitivity over her lumbar vertebrae.
There was decreased range of motion (ROM) in her right front carpus and she had some thickening to joint capsule on the medial side. X rays were taken of her knee and showed osteoarthritis at the medial surface of the intercarpal joint.

No bloodwork was preformed and xrays were not taken of her cervical or lumbar vertebrae.

Medical Decision Making:
Since her teeth were a primary concern, Lady was sedated for a dental. Sharp points on her molars were reduced to establish correct molar occlusion and allow for healing of her oral ulcers.

Nicole was also a little concerned about how Lady would respond to AP treatments and needle placement. So we decided to perform her first AP treatment while she was still a little sedated from the dental.

We decided to try 3 AP treatments over the course of a few weeks to see how she would respond. Our goal was to maintain the highest level of athletic performance without the need for bute or other oral anti-inflammatories.

The acupuncture treatments were focused on stimulating her central and peripheral nervous system and reducing inflammation and pain in Lady’s right front leg and along her lumbar area. Chiropractic adjustments and vertebral subluxations were address as needed.

Definitive Diagnosis:
Multiple diagnoses were made on initial presentation. Oral ulcers and sharp points on her molars caused dental pain and likely TMJ and neck pain. Lady’s xrays were consistent with osteoarthritis in her intercarpal joint on her right front carpus. 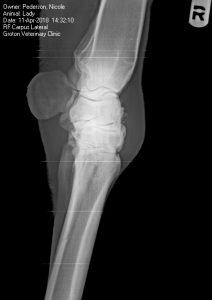 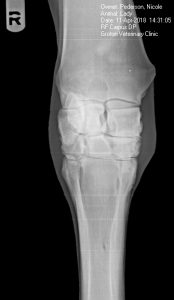 Third Treatment on 5-18-18:
For the third treatment Lady was not sedated. Myofacial palpation showed that she had decreased ROM on the left side of her neck and muscle sensitivity over the splenius muscle and brachiocphallic muscle. She was also reactive to PC 1 on the right side but not on the left side. This corresponds to the pain in her right leg from her previous knee surgery.
Chiropractic adjustments were performed prior to the AP.
AP points included: GV14, GV20, BaiHui
GB 21, LI 16, ST36
BL 10, BL21, BL 23, BL 25
Right side only: PC 1, LI 10, PC 6.
Left side only: LI 17, trigger point dorsal cranial to LI 17 in splenius muscle
Blue Seirins 0.20mm diameter, 30mm long were used. Points were bilateral unless on midline or otherwise specified.

Outcomes & Discussion:
Lady responded well to her AP treatments. After the second treatment Nicole was impressed with how well she relaxed and seemed very content during the treatment. Nicole’s impression of her was that she moved better under saddle and seemed to stride out better after treatments.

Lady consistently showed decreased ROM and stiffness on the left side of her neck. In the future it may be worth taking cervical xrays or performing ultrasound of the facet joints on her cervical vertebrae. We did not pursue this at this time, but we do not have a reason for the stiffness other than possibly compensating for the pain in her right front carpus.