Carpal Osteoarthritis and Myofascial Strain in a 9 Year Old Labrador

Abstract:. Brewer is a 9yo MN lab who presented for decreased energy, weight gain and pain in hips and left carpus. He was treated with 3 acupuncture visits and began to show increase in energy, ability to go up/down stairs, and become more comfortable while sleeping.

History and Presentation: Brewer is a 9yo MN lab who was hit by a car when he was 10 months old. He had a right femoral fracture that had pins placed. Shortly after surgery he lost function of the limb due to sciatic nerve impingement and had to undergo a second surgery to replace/shorten the pins but made a full recovery. A month before acupuncture was requested, radiographs of right carpus were taken as bony changes were noticed with increased sensitivity to that limb. Brewer was diagnosed with osteoarthritis of his right carpus- possibly from previous car injury (not detected at that time) or old age related. Brewer was put on meloxicam and glucosamine with minimal results.

Physical Examination and Clinical Assessments: Brewer is an anxious, mildly overweight lab (BCS 6/9) with increased bony changes over left carpus with mild hindlimb muscle atrophy (more marked on right side). During locomotion, he has a mild lateral swing to his right hindlimb with decreased weight loading on left forelimb. Taut bands along neck, significant tightness in triceps and shoulders. There was also significant myofascial strain along spine and hips.

Medical Decision Making: Brewer is very anxious and uneasy about treatments/restraint. I needed to make sure I gained his trust despite him knowing me personally for a few years. He has strain patterns associated with contralateral overcompensation of right hindlimb trauma in his left forearm with generalized muscle strain from improper locomotion and decreased performance. I am hoping that since no response was seen with medical treatment, by addressing muscle strain and overall tightness that I may alleviate Brewer’s discomfort.
For acupuncture decision making: Massage and range of motion was the first round of treatment as that was all Brewer could handle mentally. The first needles I would place would be the big calming points to ensure that Brewer didn’t become over anxious. I then wanted to address specifically the left carpus, inner bladder line, hip triad, and local leg points. There were a lot of taut bands and trigger points in which if tolerated, I would follow up with those points. 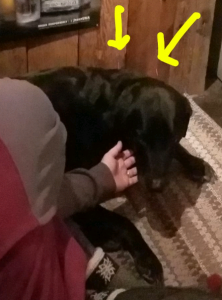 Outcomes, Discussions, and References:
DAY 1: I was impressed by the amount of strain and muscle tension Brewer had. I had never thoroughly appreciated that before this class and learned to trust the soft palpation I learned from this class. After loosening the myofascia, Brewer’s demeanor changed. He always laid awkwardly and never wanted to curl up, but after the muscle work and massage, he actually curled up to sleep and tucked his left forearm into his body.
DAY 2: Brewer’s mom noted what a change in Brewer’s behavior over the next few days after his first treatment. He seemed less anxious, he was sleepy for about a day and a half but seemed to be happier and more content. Brewer tolerated the acupuncture needles far better than I expected. He was less anxious if it was just me and him (no family member at his head) and was never held down or forced to stay. He started to fall asleep during treatment and remained laying down even after the massage and treatment ended.
DAY 3: Brewer became more anxious during this treatment than previously. I did not address any specific trigger points, as he was uneasy and wanted to keep the sessions enjoyable. I did some minor muscle spindle massage/release on the trigger points in the shoulder/neck areas. There was more fluid muscle/gait movement and less reluctance to use the stairs and chase the girls around.