Jezzabelle, an 8 year old female spayed terrier boxer cross, presented May 2, 2018 for assessment and acupuncture treatment. The patient was diagnosed in 2014 with moderate bilateral elbow osteoarthritis attributed to degenerative joint disease. Conventional medications including meloxicam and tramadol along with laser therapy and mobility diet were started with minimal improvement. The patient was started on once a week acupuncture treatments for 4 sessions with significant improvement in energy level, mobility, and lameness.

History and Presentation:
Jezzabelle, an 8-year-old female spayed terrier-boxer cross, presented on May 2, 2018 with a chief complaint of ongoing forelimb lameness. In 2014 the patient presented to her primary care veterinarian for ‘clicking noise’ coming from the carpus and lameness after long hikes. Radiographs revealed moderate bilateral elbow osteoarthritis attributed to degenerative joint disease. The patient was started on meloxicam and continues to receive a 0.05mg/kg oral dose 2 times a week for pain control. The patient has also had a trial of tramadol with no improvement. The patient has been on Gabapentin 10 mg/kg dose twice a day for a year with moderate improvement in discomfort noted by owner. Was on regular laser therapy when diagnosed in 2014, with mild improvement noted by the owner, last treatment was in 2015. Patient is currently on MCRC Mobility Support with Bioflex chews once a day. Owner, a registered veterinary technician, performs balancing exercises on balancing disks and weave exercises and walking over objects to improve shoulder range of motion.

Medical Decision Making:
An acupuncture approach was established using the MAIN technique. First focusing on autonomic nervous system points to establish a state of relaxation and homeostasis. From there central points were chosen to address the segmental nerve roots of the front limbs (caudal cervical spinal nerve points). Inner bladder line points were also chosen as central points but also for their myofascial component along the effected thoracolumbar spine. Peripheral points were chosen along the radial nerve to address elbow pain. Local trigger points and ropey bands were dry needled addressing the myofascial component. Once the needles were in place laser therapy was added. The needles were then removed and a full body massage was performed to assist in release of deep connective tissue.

Acupuncture Treatments:
Once the myofascial exam was complete dry needling was started as the first method of stimulation. The first acupuncture point chosen was GV 14. This point was chosen as the starting point as a safe point to assess how the patient would respond to needling, also for its relation to the start of the sympathetic beginning of the spinal cord and its effects on the autonomic nervous system, and finally for its benefits seen with neck and thoracic limb pain.
Followed by Bai Hui with its close approximation to the cauda equina stimulating the autonomic nervous system. Then GV 20 for its autonomic neuromodulation through crosstalk with the vagus nerve. Caudal cervical points were chosen in the omotransversarius at C6 and C8 bilaterally for the local tension noted in the myofascia along with stimulating the segmental nerve roots of the front limbs. BL 18, BL 22, and BL 25 were all chosen due to span local pain found on exam. GB 21 was dry needled bilaterally for local trigger points identified at its location. SI 9 as a peripheral point along the radial nerve and also due to its association with the triceps brachii muscle which was found to be tense on exam. LI 11 was needled for local pain found in the extensors, it’s association with the radial nerve and its effects on the autonomic nervous system and anti-inflammatory effects. ST 36 chosen as a distal point for its vagal support through somatic afferent stimulation reaching the brainstem at the nucleus tractus solitarius and its anti-inflammatory effects. Finally a needle was placed in the ropey band found on the right just caudal to the caudal border of the scapula. Once the needles were in place laser therapy was added using MR4 Activet focusing on elbows, triceps, bilateral lateral cervical spine, and finally bilaterally along the thoracolumbar spine. The laser was set on program 3 which is 1000-3000hz. It has wavelengths of 905nm, 875nm broadband, 640nm red plus magnetic therapy. Delivered in 25 watts of TRUE Super Pulsed (billionths of a second). The total duration of laser treatment was 15 minutes scanning 1 cm/second. The needles were removed as the laser treatment was completed, each needle being left in place for 15-20 minutes. Finally, a full body massage was performed using a combination of effleurage and petrissage. The patient had a total of 4 treatments 7 days apart each. The second treatment more points were added as the patient responded well with her first treatment. BL 17, 20, & 23 were added for local pain. TH 10 was added for the tension in the triceps and radial nerve association. HT 3 was added as well for medial elbow pain. The needles used were a combination of Seirin No.1 (0.16x30mm) and Seirin No. 2 (0.18x30mm). The following two treatments followed this treatment plan. 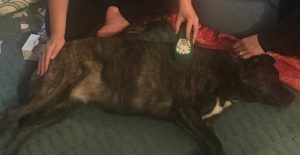 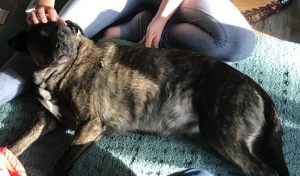 Outcomes, Discussions:
The patient overall responded well to treatments. The owner was able to increase her walks from short 5 minute walks around the block to 15 minute walks around the lake. She was also able to wean back her meloxicam from 2 times a week to once every other week. Overall, the client reports a big change in the patient’s energy level and demeanor following acupuncture treatments, reporting an improvement in the patient’s mobility and lameness that lasted for about a week. By the end of each week the patient was starting to slow down again. At the beginning of each treatment every week there was not much improvement seen on gait analysis but on myofascial exam there was a big improvement in areas of tension with each proceeding treatment, less tension in connective tissues and less pain on palpation. The only adverse effects seen were a transient worsening of symptoms (slower gait, and pronounced head bob) following treatment that lasted for about 20-30 minutes, that improved with more movement.

Describe Your Impressions of this Medical Acupuncture Experience:
I learned a lot from working on Jezzabelle. I was hoping for better and longer lasting results, but learned that with degenerative joint disease acupuncture effects are transient as the underlying issue cannot be resolved but the goal is to slow down progression and relieve areas that are experiencing discomfort from secondary compensation. I also was able to really feel a difference on my myofascial exam and witness the body’s immediate and long term response to dry needling.